In a village so thick with red dirt that the palm trees bear a rusty hue, a fresh burst of color beckons people from near and far.

A new United Methodist church — painted an almost-iridescent green — fills with worshippers eager to sing their love of Jesus.

Even with its bright exterior, the building is unpretentious. A plastic roof keeps out the rain. Open windows let in the breeze. Wooden pews provide a place to sit and hear the word.

But when Zacharie Aka looks around the modest structure, the church lay leader has in mind a much more exalted location.

“I’m already in heaven,” he said. Like other Ivoirians, most of whom speak French, Aka spoke to the United Methodist News Service through an interpreter. 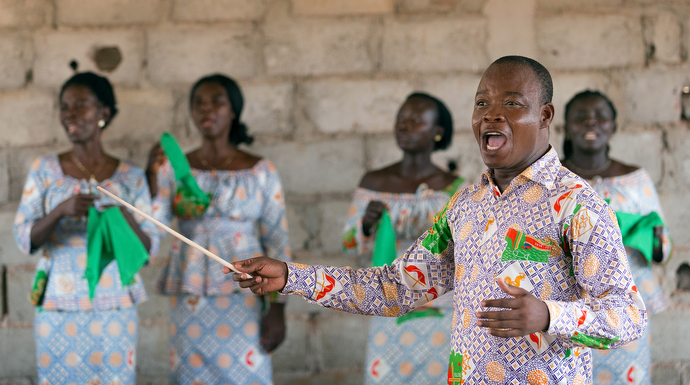 Edmond Assamoi directs the choir at the United Methodist church in Gouabo.

Before the church was built, Aka and about 50 others would gather in a cramped, narrow building. The heat often was unbearable.

The experience of United Methodists in the village of Gouabo is just one example of how the church is growing in western African countries.

Between 2006 and 2016, denominational data shows, the number of United Methodists in West Africa grew from about 1.46 million to nearly 1.8 million — a 22 percent increase.

The Côte d’Ivoire Conference played a significant role in that growth when it officially joined The United Methodist Church in 2008, adding 677,355 members to the denomination’s rolls.

To put those numbers in perspective, the largest conference in the U.S. — North Georgia — has just under 361,000 members. 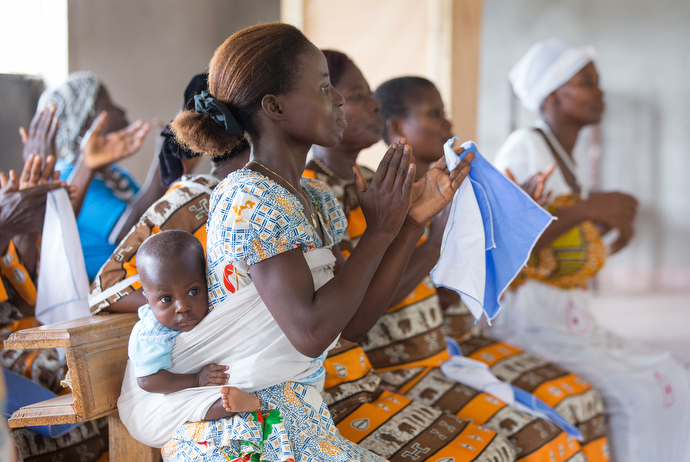 More recent church membership figures in Côte d’Ivoire are hard to come by. Nevertheless, United Methodists here can point to plenty examples of continued growth — including the experience in Gouabo.

“As Jesus said, the Gospel must go to the ends of the earth,” said the conference’s Bishop Benjamin Boni. “When I was appointed bishop, I put myself to work so that everyone in the church would catch that global vision.”

He said United Methodists in the Côte d’Ivoire Conference have multiple ways of spreading the Gospel. These include powerful preaching, spirited choral singing and ministry with the least of these.

The conference, the bishop said, also is growing by starting new places of worship.

In Côte d’Ivoire — where Christians are about 34 percent of the population and pastel-colored mosques dot the landscape — building a church is an act of evangelism. 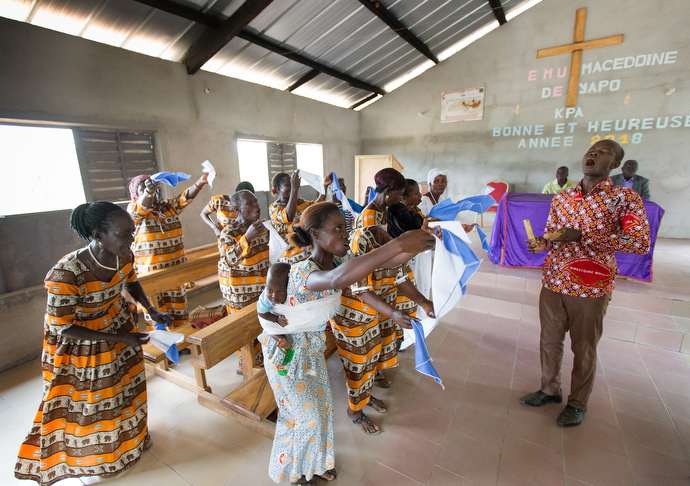 With that in mind, United Methodists in the conference have established Victory Mission Group, a nongovernmental organization that constructs churches. Ivoirians call the buildings temples.

Daniel Dombo, who founded Victory Mission Group, said the goal is to build churches where United Methodists previously have not had much of a presence. 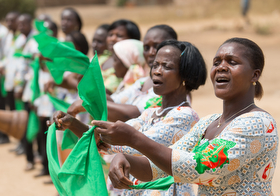 Members of the choir welcome visitors to the United Methodist church in Gouabo, Côte d'Ivoire.
The United Methodist Church is in planting phase in Côte d’Ivoire. To help train evangelists and church planters, people can give to Advance #3021990.

In 2014, the year that marked a century of Methodism in Côte d’Ivoire, the group launched an initiative to build 100 new United Methodist temples. At the time, the conference had 1,030 churches.

That includes building in the majority-Muslim northern part of the country and in southern villages with few United Methodists.

So far, Victory Mission Group has constructed 50 new places of worship, with five under construction. And people are flocking to the new temples.

The church had previously used a temporary structure that fell apart. The small congregation then worshipped outdoors and saw its attendance plummet.

In Zienkolo — a community in the northern part of the country — the villagers were all animist or Muslim before Victory Mission Group arrived, Dombo said. Since the construction of the temple — painted bright green like the one in Gouabo — Dombo said about half the village has converted to Christianity. Animists believe objects, places and animals have a spiritual essence, and that these spiritual beings are concerned with human affairs. 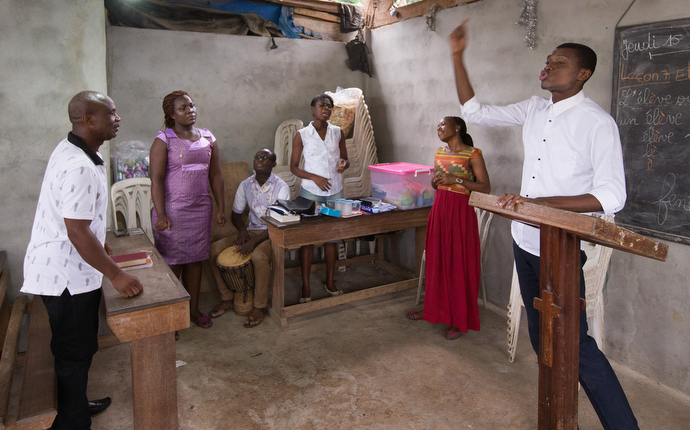 Dombo estimates that each new temple leads to an average of 75 new United Methodists. That means the initiative has led to about 3,750 new church members since 2014.

“When you build a temple, the temple draws people to come to Christ,” he said. 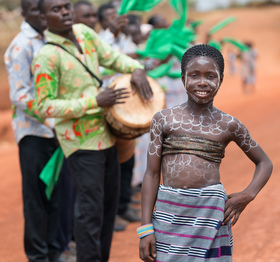 Building new churches takes collaboration. Dombo said the group receives financial and other forms of support from local volunteers, the Côte d’Ivoire Conference, the United Methodist Board of Global Ministries, and some conferences in the United States.

New construction is not the only way the church is growing in Côte d’Ivoire. As has happened with many multi-campus U.S. churches, established United Methodist churches here also can grow by adding new worship sites.

An adult Sunday school class at Jubilee United Methodist Church is taking the lead in expanding the congregation’s presence. Jubilee is located in the relatively prosperous Abidjan neighborhood of Cocody — home to the bishop’s residence, a university and various foreign embassies.

The young professionals of the church’s New Jerusalem Sunday school class two years ago started a second church campus beyond these comfortable environs.

Their goal is to proclaim good news to the poor. 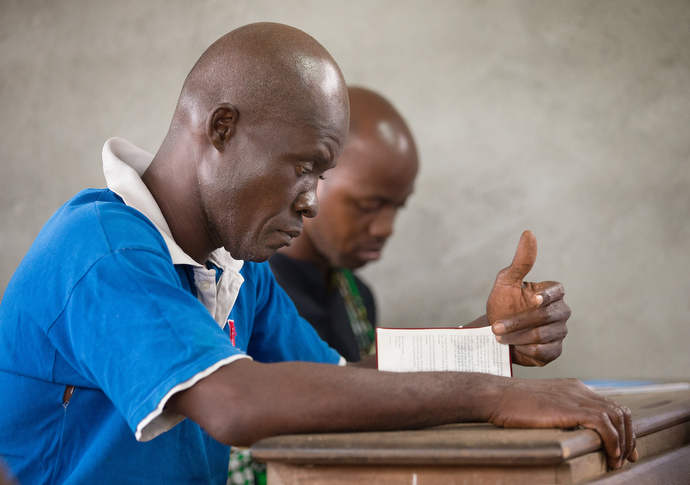 Down a steep, muddy alley and past rickety buildings with walls of corrugated metal stands a small shelter. This concrete structure in the middle of a city slum is the New Jerusalem campus.

The structure has little more than a roof, a few pews and a blackboard in the back. But each Sunday afternoon, it is packed to overflowing with adults and children eager to learn and worship.

Here, the Jubilee members lead Bible studies that double as literacy lessons for both children and adults. A worship service full of rousing singing and preaching follows.

“It is very important for us to found a place where we can announce the Gospel and try to make disciples,” Benjamin Olagboye, one of the campus leaders, told United Methodist News Service. 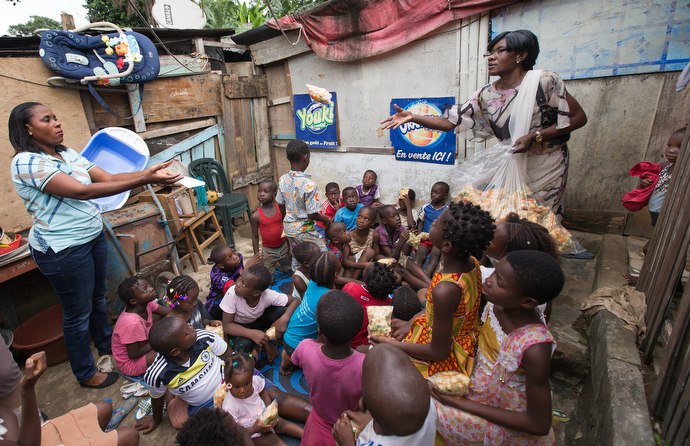 The Sunday school class has a holistic approach, working on health, water and sanitation issues in the neighborhood. Olagboye works for USAID.

“The purpose of this work is to put Jesus Christ at the center of development in this community,” he said.

Whether revitalizing a slum or brightening a village, these new communities of worship mainly aim to nurture lifelong Christ followers.

Back in Gouabo, Assovie Olivire said it has strengthened his faith to see United Methodists from outside the village help establish the new temple. He and other villagers also helped with the construction.

“I am very happy to be part of this church,” he said. 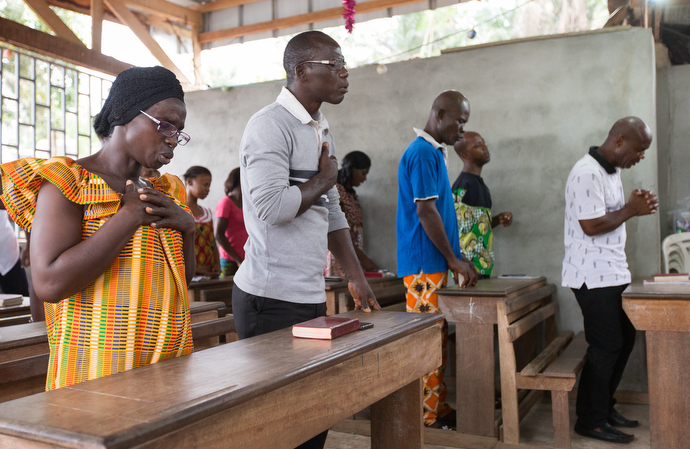 Côte d’Ivoire is a land of agricultural bounty. Nonetheless, malnutrition is a real problem. Here is one way United Methodists are working to solve it.
Evangelism

A missionary has started a course to help married couples strengthen their relationships. Graduation featured a church version of The Newlywed Game.
Violence

The United Methodist radio station in Côte d’Ivoire has braved gun battles to share the gospel. Others want to emulate its passion for evangelism.