Most husbands and wives remember each other’s birthdays. But if put on the spot, could you say what time of day your beloved was born?

That’s one of the questions 12 married couples faced at the end of worship one Sunday at Nazareth United Methodist Church.

With giggles and sideways glances at their spouses across the aisle, the couples tried to answer — or in some cases, offered rough guesses.

The couples had all completed a 3½-month course on marriage led by the Rev. Jean Claude Masuka Maleka, the congregation’s pastor and a United Methodist missionary in this west African country. 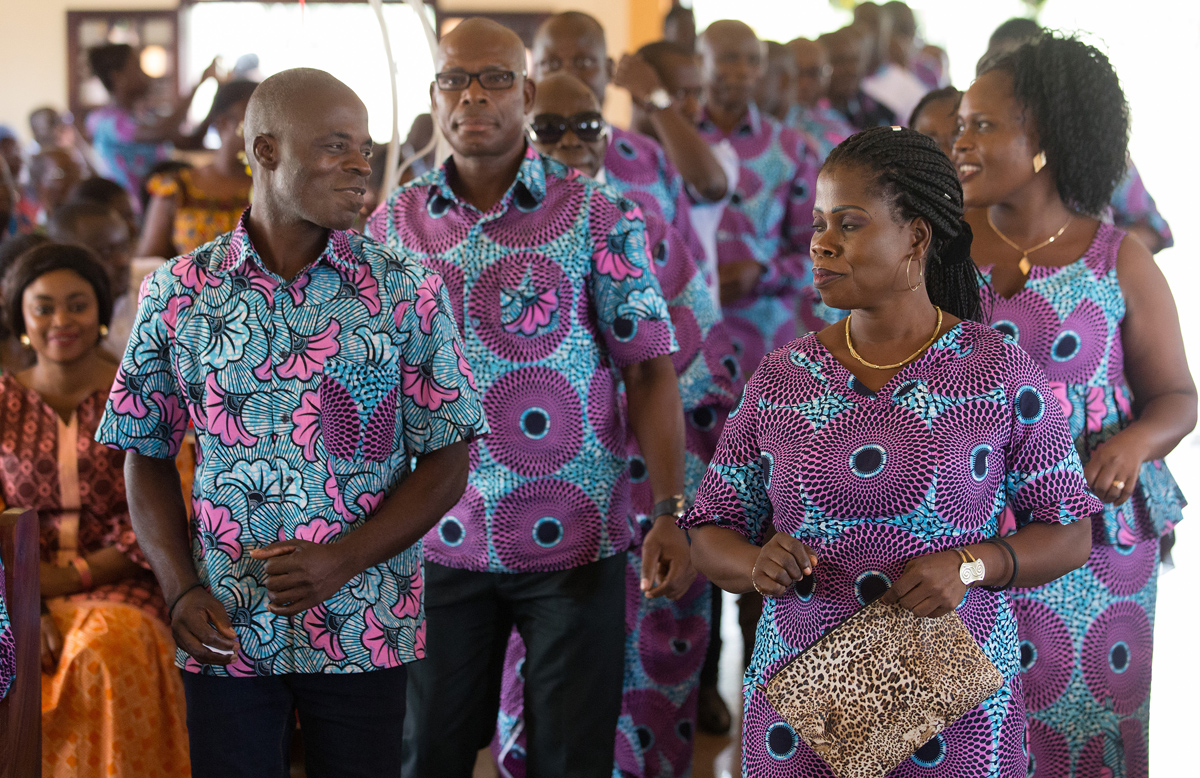 Husbands and wives who have completed a 3½-month course on marriage process down the aisle to be recognized at Nazareth United Methodist Church.

Their graduation ceremony had them at the front of the sanctuary, playing a church version of The Newlywed Game.

For the congregation, watching the nervous and happy couples was a bit like being a guest to 12 weddings at once.

People dressed up for the occasion. All of the couples and many of the parishioners wore clothing decorated in the same purple and turquoise pattern. Maleka preached on the value of marriage. Those in attendance even looked forward to a reception after the service. 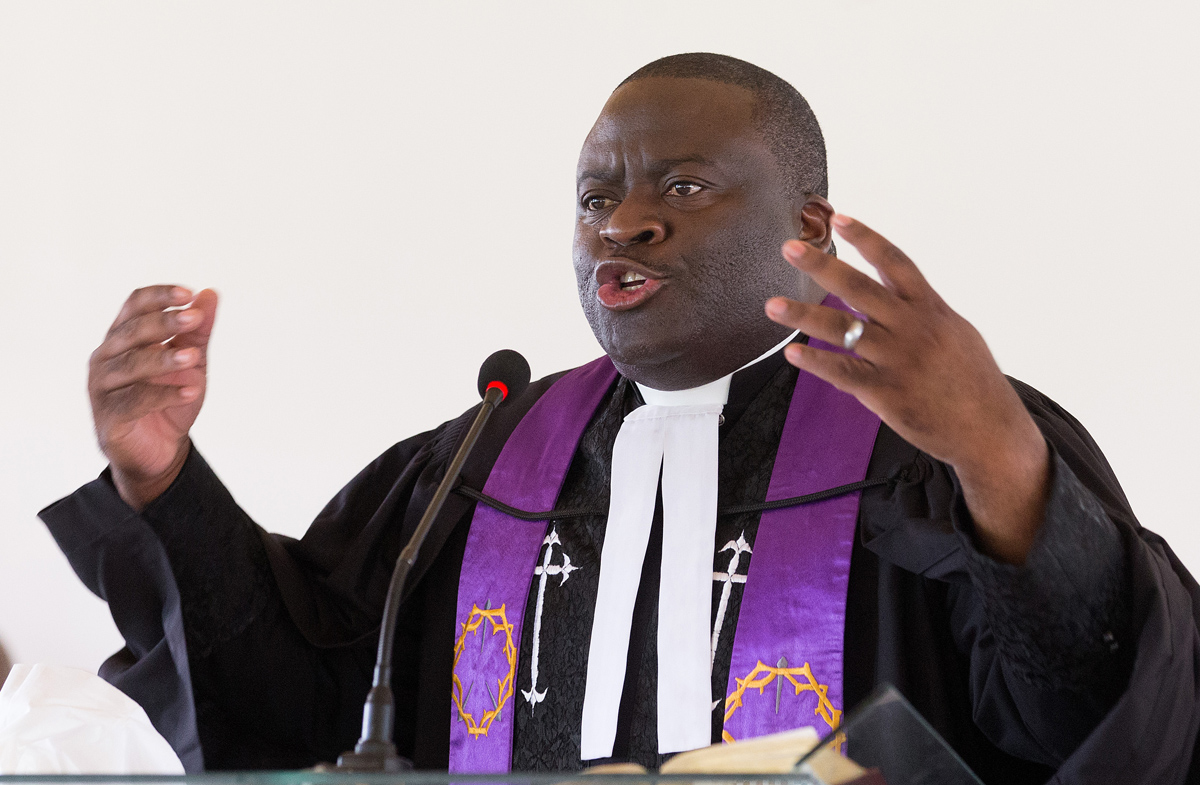 Appropriately, the festivities came just days after Valentine’s Day, which Ivoirians celebrate much like Americans — with date nights and heart-shaped decorations. All the previous week, billboards across Côte d’Ivoire’s largest city extolled various Valentine gifts such as perfume, chocolates and romantic dinners.

However, the church’s celebration was not about such transitory delights as heart-shaped treats and soon-to-wither flowers.

Maleka sees strengthening marriage as nothing less than a way to help spread the Gospel.

“The ministry of focusing on couples is restoring the church,” he told United Methodist News Service. “It’s giving strength to all other ministries in our church — to Sunday school, to youth group.” 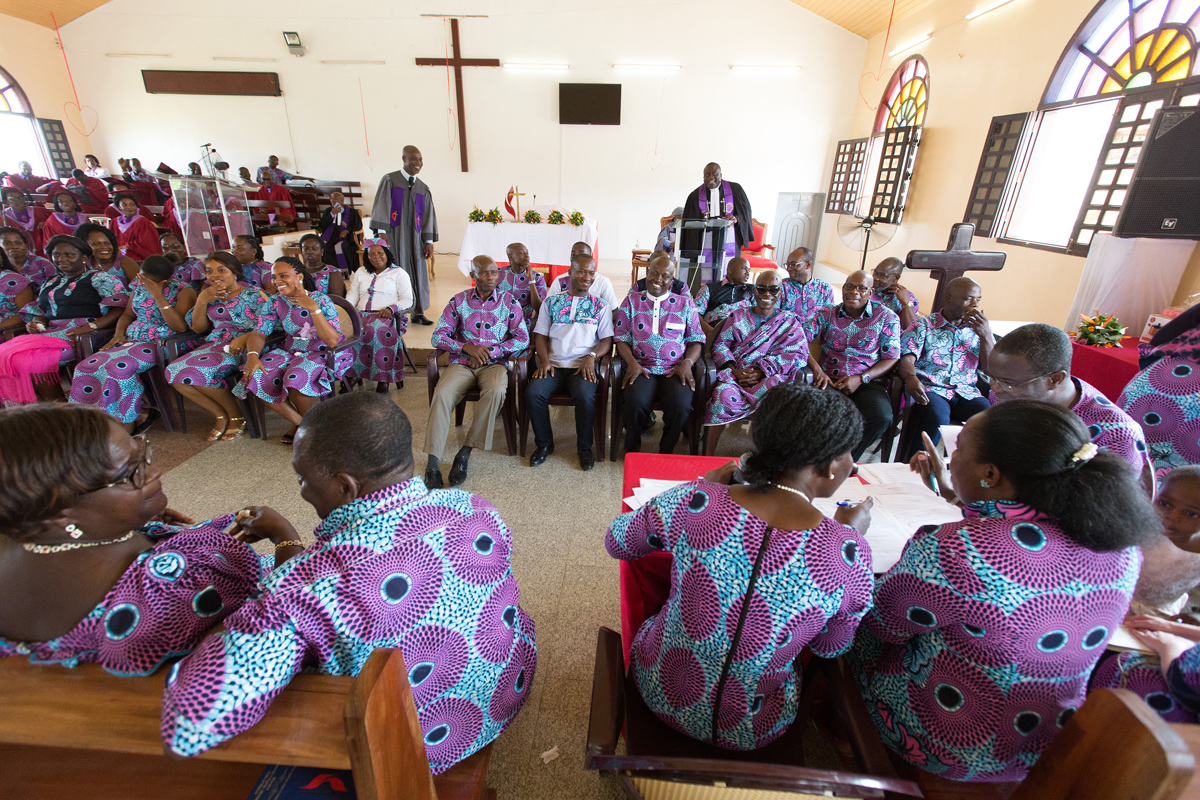 Husbands and wives sit on opposite sides of the sanctuary during a church version of The Newlywed Game at Nazareth United Methodist Church.

How to help missionaries 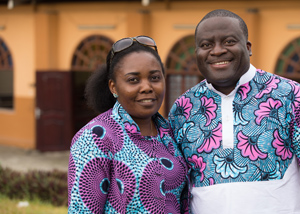 United Methodist missionary couple Francine Mpanga Mufuk (left) and the Rev. Jean Claude Masuka Maleka have been married for 18 years.
You can support United Methodist missionaries by giving to the Advance, the denomination’s designated giving program.
• Francine Mpanga Mufuk receives support through Advance No. 3022068.
• The Rev. Jean Claude Masuka Maleka receives support through Advance No. 3021390.
• Watch audio slideshow on their ministry.
• Read more stories from our series: Singing the Gospel in Côte d’Ivoire.
He credits the church’s marriage ministry with contributing to the church’s growth. In the past three years, the Nazareth congregation has grown from 300 to 700 members.

Among the eight questions posed to each couple, some were of a distinctly religious nature and others were about daily life.

Couples had to name each other’s favorite hymn. Wives were asked what their husbands do first after they wake up. Husbands were asked which member of their families had the closest relationship with their wives.

Like most people in Côte d’Ivoire, the couples all spoke in French.

When the results had all been tabulated, the congregation learned one couple got all eight answers right. Olivier and Marianne N’Kouassé, the winning couple, have been married 13 years.

To celebrate, Olivier — the church’s choir director — serenaded his wife. “Whatever challenge we face, we should do it together,” he sang in French.

While all in good fun, Maleka said the day’s festivities were part of addressing a serious problem.

When he first came to Nazareth United Methodist Church, he learned that 30 percent of the church’s members had been through divorce. That’s a particularly troubling statistic in a country where United Methodists frequently require church leaders — whether lay or clergy — to be married. 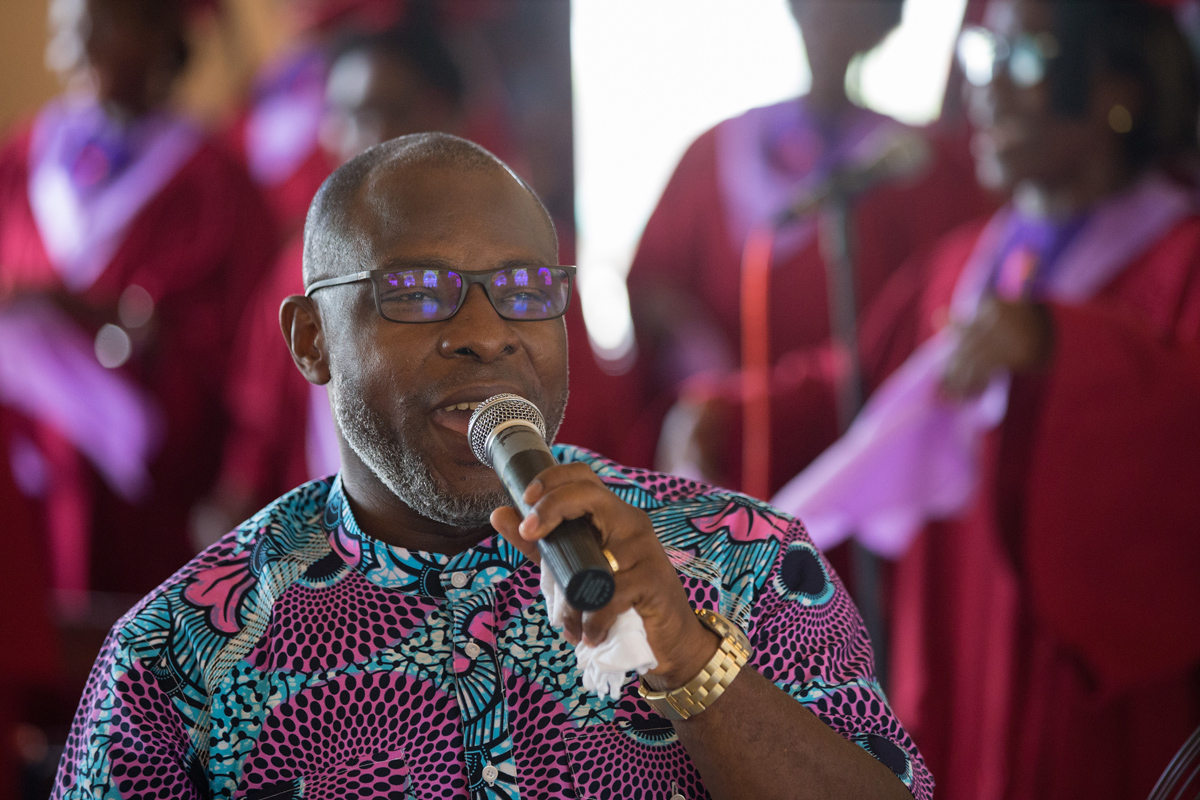 Olivier N’Kouassé serenades his wife after the couple won a church version of The Newlywed Game at Nazareth United Methodist Church. "Whatever challenge we face, we should do it together," he sang in French.

Maleka wanted to help couples avoid the mistakes, such as poor communication and lack of trust, that can sever relationships.

In the process, he said the ministry also has strengthened the marriage he enjoys with Francine Mpanga Mufuk, his wife of nearly 18 years and a fellow United Methodist missionary. The two met as university students in their native Democratic Republic of Congo, and are the parents of two teenagers.

“Without God’s love, there is no marriage,” Mpanga Mufuk said. “Marriage is the foundation of the church. In 18 years of my own experience, I have learned mutual love, patience, hope and faith in God as elements of Christian marriage.”

Jonas Assogba beamed throughout most of the February graduation ceremony. He participated in the marriage-enrichment course with his wife, Massan Brigitte. Maleka said the Assogbas told him the course helped the couple discover the gifts they have in each other. 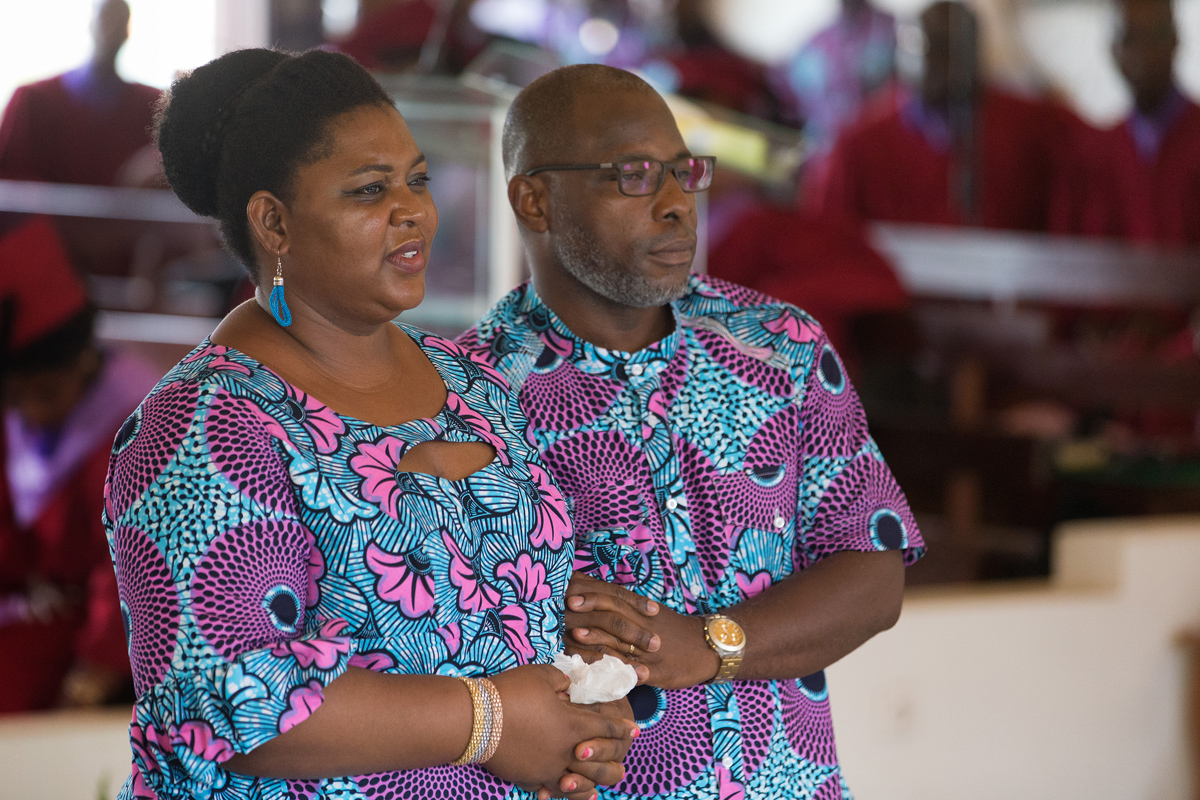 Marianne and Olivier N’Kouassé stand to be recognized after winning a church version of The Newlywed Game at Nazareth United Methodist Church.

The February celebration marked the completion of the congregation’s first school for marriage. Maleka plans to lead another course, starting in July.

To the congregation’s applause, Maleka announced that the Côte d’Ivoire Conference’s Bishop Benjamin Boni plans to attend the next graduation ceremony in October.

“A solid foundation for marriage is love,” he told those gathered. “We need to love our spouse so that the blessings and grace of God will come down on us.” 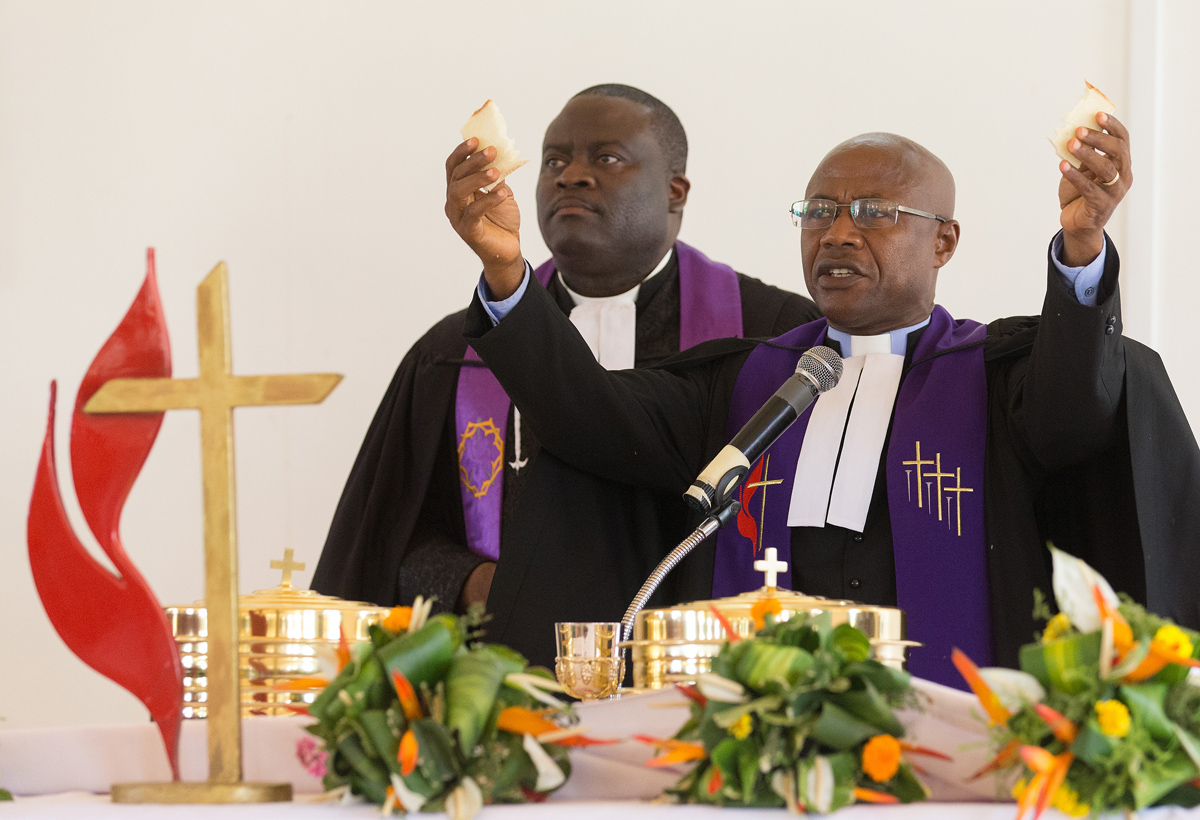 Hahn is a reporter and DuBose is a photographer with United Methodist News Service. Contact them at (615) 742-5470 or [email protected]. To read more United Methodist news, subscribe to the free Daily or Weekly Digests.