Every time you go to the grocery store, you likely see a bit of Côte d’Ivoire.

The country is the world’s largest producer of cocoa — supplying 30 percent of the beans that satisfy global chocolate cravings. It’s also a leading producer of coffee, cashew nuts, melons, bananas and palm oil.

Such fruitfulness makes it all the more troubling that any Ivoirian should lack enough to eat, said United Methodist Bishop Benjamin Boni.

A church day care program is one way the Côte d’Ivoire Conference, which Boni leads, is working to ease the nation’s hunger pangs.

In a nation where rural areas rarely have access to preschool, this United Methodist-run pilot project in the village of Youhoulil is educating young minds as well as filling bellies.

Church leaders hope the project is just the beginning. The conference has made food security a focus for this year. 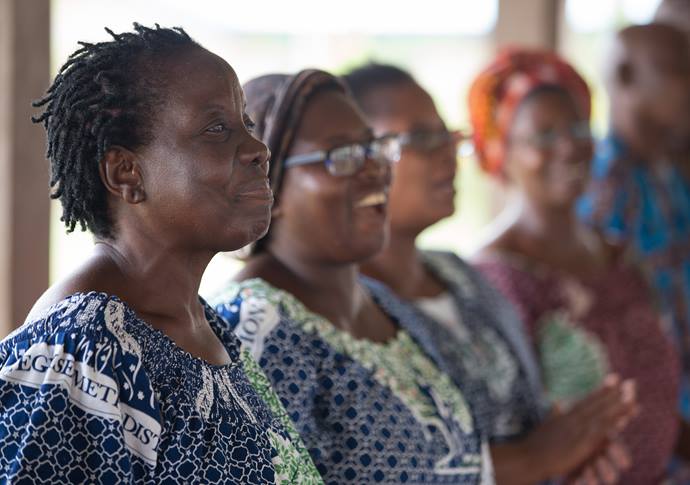 Djambi Gnandué Béatrice (left) joins other community leaders in a celebration of the Bethlehem Day Care Center, which is a ministry of United Methodist Women in the Dabou District

“This country is so blessed,” Boni said through an interpreter. “There are no dry areas where you cannot plant.”

Yet, there are areas where people do go hungry. According to the humanitarian organization World Food Programme, 7 percent of the country’s babies and young children suffer from malnutrition. More than 5.4 million Ivoirians — 23 percent of the population — live below the international poverty line (defined as U.S. $1.25 a day).

“Christ Jesus told his disciples that they should give food to the people,” Boni said. “We understand through this Scripture that the physical welfare of people is as important as their spiritual welfare.”

In Youhoulil, located in the denomination’s Dabou District, United Methodist women noticed many of the children were undernourished. 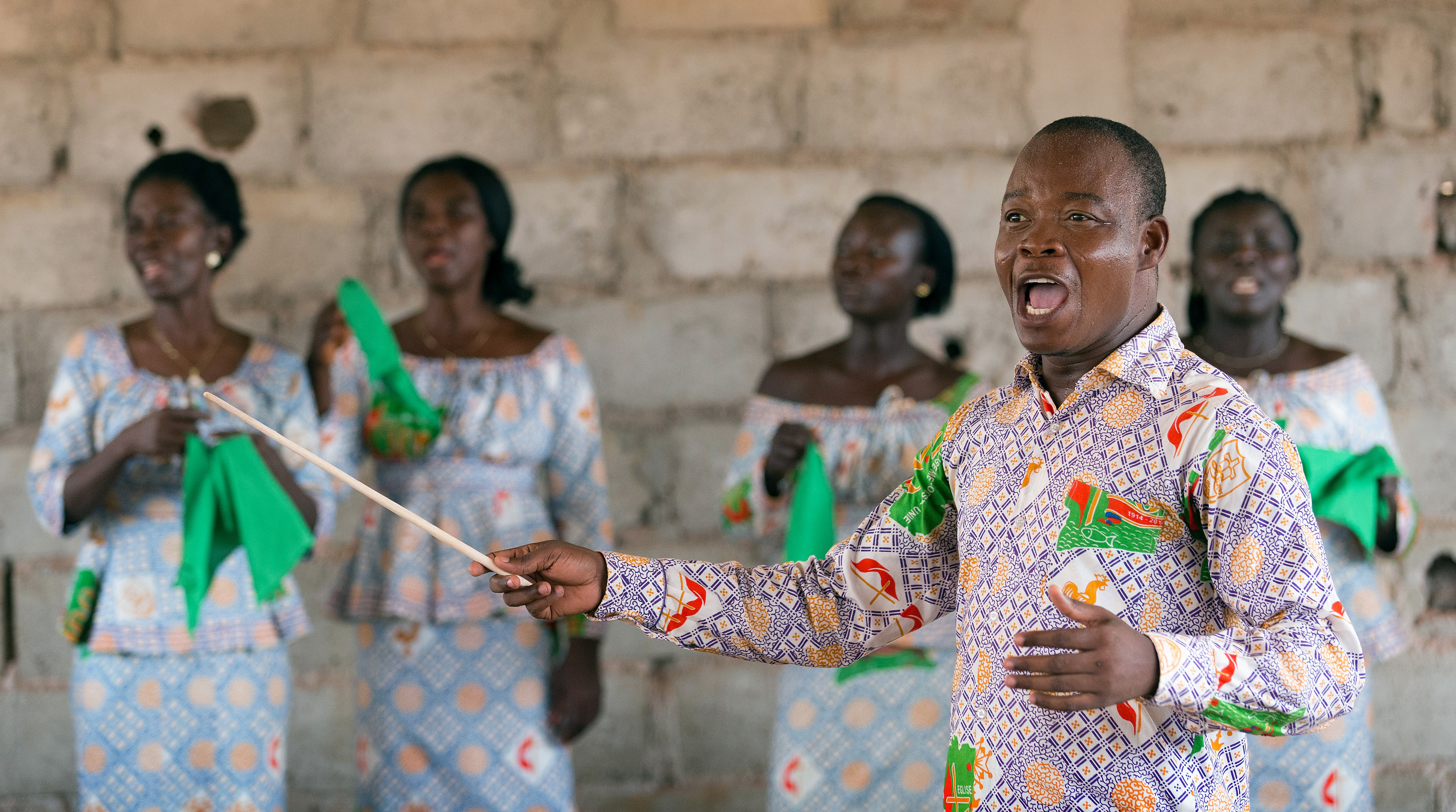 You can support this and other development projects in Cote d'Ivoire's Dabou District by giving to The Advance, The United Methodist Church's desiginated giving program.

The Bethlehem Day Care and other infrastructure projects, including the construction of a prayer center, receive support through Advance #3022268.

Read more stories from our series, Singing the Gospel in Cote d'ivoire.

This happened despite the fact that most of the village’s adults are farmers who cultivate cassava — a tuber that is a staple of west African diets much as potatoes are in the U.S.

Cassava is the main ingredient in the popular Ivoirian side dish Attiéké, but it doesn’t contain much in the way of protein. As 1980s cereal commercials would say, cassava can only be part of a complete breakfast.

The United Methodist Women’s organization in the Dabou District started the Bethlehem Day Care in this farming community in 2016.

The goal is to teach the youngsters the basics of reading, math, history and the Christian faith. The women also want to make sure 2- to 5-year-olds have at least two balanced meals a day.

On a muggy Wednesday morning, the 4- and 5-year-olds sat bunched up on the floor excitedly reviewing the difference between up and down and between front and back.

Little brightly colored handprints decorate their classroom — one of only two in the small, brick school building.

The day begins with prayer at 8 a.m. followed by a breakfast of porridge, and then lessons. The youngsters break for lunch at noon, which is typically rice and beans or a hearty soup. Then it’s naptime followed by more lessons. The school day ends at 4 p.m., with the children usually sent off with a snack they can take home.

Parents pay the day care center 100 XOF, or roughly 18 U.S. cents, a day for the school. But it wouldn’t happen without the wider church’s support. 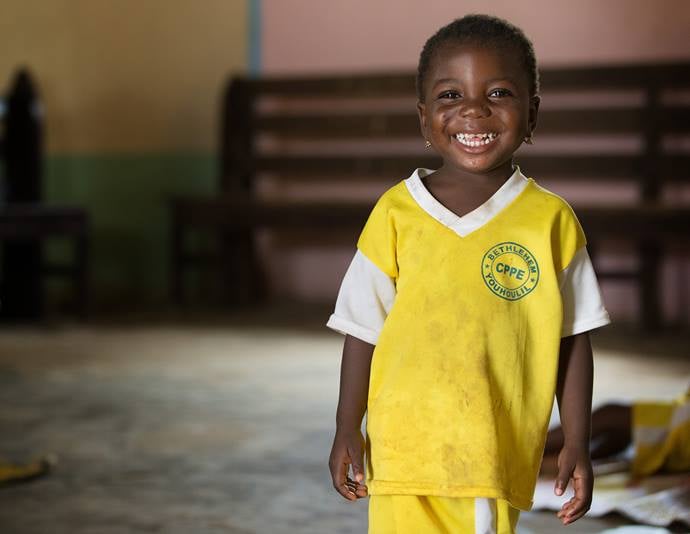 “Our plan is to build a better facility to accommodate more children,” said Djambi Gnandué Béatrice, the chair of the women’s organization. She pointed to bricks neatly stacked near the school’s entrance that are ready to be used in the expansion.

“Our dream is to see this repeated in all villages.”

Francine Mpanga Mufuk, a United Methodist missionary who works with women’s ministries across Côte d’Ivoire, sees in the Bethlehem Day Care an example of Christ’s miracles.

Initially, the women’s main worry was that there would not be enough food for all the youngsters, she said. The day the nursery school opened, many of the kids’ elder brothers and sisters also came wanting something to eat. There was far more demand than the women anticipated.

But church members stepped up. One person donated a bag of rice. Another gave a bottle of oil. The gifts continued and soon the women’s larders were full.

“At the end of the month, we discovered we have enough food to give to the kids,” Mpanga Mufuk said. “It’s like the way Jesus multiplied the food. That’s the story of the school in Dabou.”

Hahn is a reporter and DuBose is a photographer with United Methodist News Service.
Contact them at (615) 742-5470 or [email protected]. To read more United Methodist news, subscribe to the free Daily or Weekly Digests.

Singing the gospel in Côte d’Ivoire

How do you evangelize where Christians are a minority? United Methodists in Côte d’Ivoire build new churches, help people in need and serve as peacemakers.
Evangelism

A married couple shows how United Methodists wed evangelism and development in missionary work. They rely on support from a diverse church.
Evangelism

A missionary has started a course to help married couples strengthen their relationships. Graduation featured a church version of The Newlywed Game.