Self-sustaining food production in Africa will get a $2 million boost after the United Methodist Board of Global Ministries allocated its largest new budget outlay in honor of the late Bishop John K. Yambasu.

Other major new allocations approved during virtual meetings March 24-26 include $1.1 million to aid asylum seekers in the U.S., $1 million to promote environmental causes and $750,000 to address global health issues.

United Methodists “cannot turn a blind eye” to injustice, said Bishop Joaquina Nhanala of Mozambique during a sermon the opening day of the meetings. Not responding to important issues would be like stating, “Jesus does not care,” she said.

The theme of the spring board meeting, held virtually for the second time because of the coronavirus, was “Serving Faithfully Amid the Tensions.”

“We are all aware of a mixture of tensions affecting our work,” said Roland Fernandes, chief executive of Global Ministries and its subsidiary, the United Methodist Committee on Relief. COVID-19, uncertainty about the future of the denomination, racism and climate change were cited as examples.

“We pray that God will give us faithful boldness as we try to live out witness into today’s world of tensions,” Fernandes said.

Yambasu, the bishop of Sierra Leone, died Aug. 16 in a car accident. Among his accomplishments, he provided leadership during the deadly 2014-2016 Ebola outbreak and a landslide that killed hundreds in 2017 in Freetown. He also arranged the meetings that led to the Protocol of Reconciliation and Grace Through Separation, the proposal to split The United Methodist Church because of differences over the rights of LGBTQ people in the church.

In his ministry, Yambasu also championed agriculture as “the one single game changer” to transform the socio-economic status of the church in Africa.

The Bishop John K. Yambasu Agriculture Initiative began with an inaugural grant of $275,000 in 2020.

“Sustainable agricultural development … in Africa is crucial for a self-reliant African church,” according to the UMCOR Board Authorization publication provided to board members. 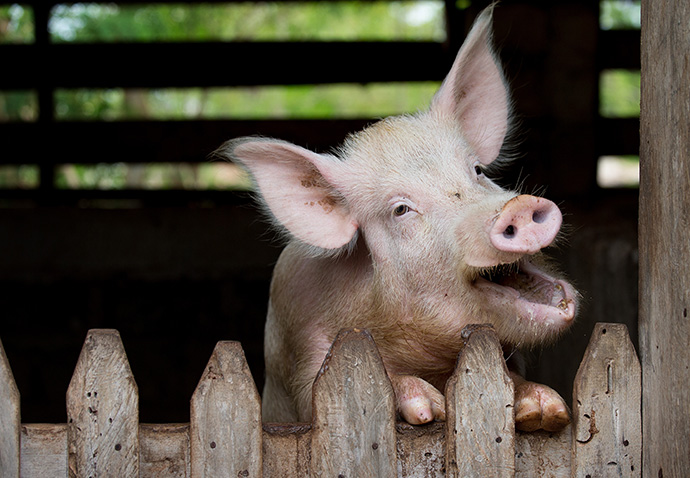 A pig looks out over the top of its enclosure during mealtime at the United Methodist Ganta Mission Station in Ganta, Liberia, in 2017. The pigs are sold for meat, and as breeder stock for churches looking to start their own pig-raising endeavors. Sustainable agriculture in Africa is the goal for a $2 million agricultural fund from Global Ministries honoring the late Bishop John K. Yambasu. File Photo by Mike DuBose, UM News.
“Programs funded through the Bishop John K. Yambasu Agriculture Initiative seek to mobilize existing land and human resources within the church, build long-term community livelihoods and food security as well as support the empowerment and solvency of the local church.”

Global Ministries officials are speaking with peers at other agencies about making a joint commitment to net-zero carbon emissions by 2050, and an announcement will be forthcoming once that process is completed, said the Rev. Jenny Phillips, senior technical adviser for environmental sustainability at Global Ministries.

The $1 million in newly allocated support approved at the spring meeting will be used for financing renewable energy projects, supporting energy efficiency and renewable energy resources and other creation care initiatives.

“We’re really excited by the possibility for systemic change that’s emerging, just in the conversations around developing this commitment with other agencies,” Phillips said. “This is really one way we can hit the root causes of suffering … by eliminating the ways that we are contributing to our changing climate through our emissions.”

A $1.1 million allocation will support the refugee and asylum programs of Church World Service, a cooperative ministry of Christian denominations that provides refugee assistance around the world. 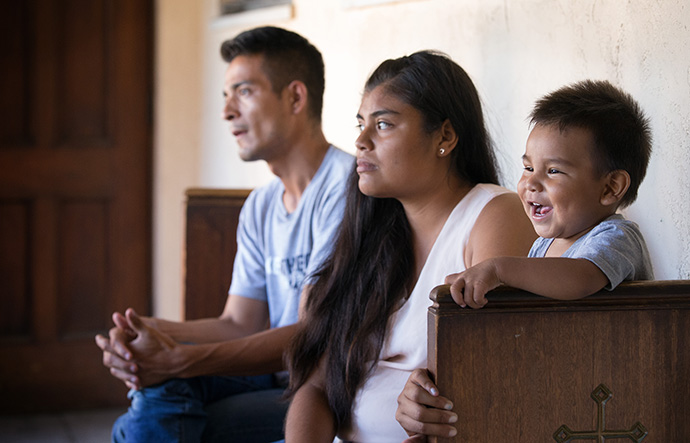 Jose Antonio Marchas Novela recounts the threats of violence that caused him to flee Mexico with his wife, Irlanda Lizbeth Jimenez Rodriguez, and their 1-year-old son, Jose Antonio in 2018. The family took shelter at the Christ United Methodist Ministry Center in San Diego while seeking asylum. The United Methodist Board of Global Ministries has allocated $1.1 million to aid asylum seekers in the U.S. File photo by Mike DuBose, UM News.
“We currently face an unprecedented challenge and opportunity to address critical issues facing … asylum seekers arriving at the U.S.-Mexico border,” said Erol Kekic, senior vice president of Church World Service, where he leads the Immigration and Refugee Program. “The urgency of the situation requires immediate action.”

Since the Biden administration rolled back the Trump-era policy of requiring all asylum seekers to wait in Mexico until their cases could be processed in the U.S., about 16,000 children have crossed the border without any family or guardians and are in U.S. custody, Kekic said.

“This is where urgency met the emergency,” Kekic said. “This creates a huge need for immediate assistance for those children and for assistance to those cities of their destination to help them have access just to legal proceedings.”

The Global Health unit of the agency requested and was approved to get an additional $750,000 on top of their already approved $3.1 million, to be used to cover budget shortfalls and help complete unfinished projects. The budget priority is nine primary health care facilities that are the first point of care for 80% of the population in 11 countries. 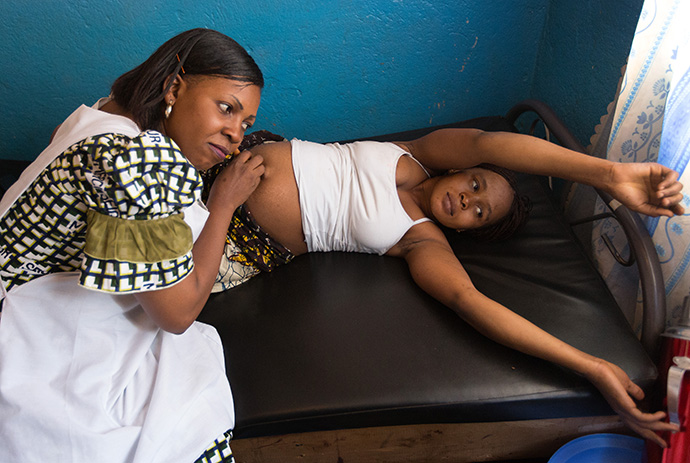 Midwife Marie Manga Dikoma uses a Pinard horn to listen to the heartbeat of Cecile Iatu's unborn baby at The United Methodist Church's Irambo Health Center in Bukavu, Congo, in 2015. The Global Health unit of the United Methodist Board of Global Ministries will receive $750,000 to address health issues as part of the agency’s budget allocations approved during their spring meeting. File photo by Mike DuBose, UM News.
In the Nahuta Primary Health Care clinic in Nigeria, 314 babies have been delivered despite the lack of clean water or bathroom facilities, said Kathy Griffith, program manager for maternal newborn and child health in the Global Health unit.

“What is a health care facility without clean water?” Griffith said. “We are aiming to establish water sanitation and hygiene in all the centers that we work in, for health and for dignity.”

The Global Ministries staff had more money to work with than they anticipated, after nearly a year of COVID-19 shutting down most Sunday services around the world.

Michael Gurick, senior director of finance at Global Ministries and UMCOR, said in a report that giving dropped less than initially projected. Giving to the denomination’s World Service Fund, which supports Global Ministries and other agencies, was down 7.9% in 2020, compared to 2019. That’s a decline from $25.1 million to $23.1 million.

“The results were far better than what was projected as the General Council on Finance and Administration had recommended planning for a collection rate of 50% for 2020,” said the report.
More than $2.7 million in additional funding requests were approved, along with about $1.5 million in grants.

“We are aware that the missional needs in the global communities are unlimited,” said Bishop Hee-Soo Jung of the Wisconsin Conference.

“There will always be people who look at a child of God and instead of seeing the face of the Christ, will see flaws and failings and sins. There will be always people who choose to criticize, attack and condemn. Let us never be (that) kind of person.”

The fall board meeting of Global Ministries is set for Oct. 27-29, again online. Preliminary plans call for resuming in-person meetings in spring 2022.

As families struggle to survive, UMCOR joins Mozambique churches in responding to food, shelter and other humanitarian needs.
Mission and Ministry

United Methodist health centers in remote areas were key in helping to immunize children and end a measles epidemic that killed more than 7,000.
Mission and Ministry

For UMCOR, 2020 is one long emergency

At its annual meeting, the relief agency points to training, support as it deals with natural disasters, global health issues and the pandemic.