In a year when one disaster seemed to follow another, the United Methodist Committee on Relief’s longtime investment into the training and support of church members who respond — both in the U.S. and globally — is paying off.

As directors of UMCOR and its parent agency, the United Methodist Board of Global Ministries, learned during their annual meetings, UMCOR currently is working 38 active grants of $19 million in the U.S. and has supported responses to 99 unique emergencies so far in 2020.

“If that sounds like a large number, it is,” said Lara Martin, interim director of U.S. disaster response for UMCOR.

The pandemic was both a complicating factor and “a silver lining” as online presentations were perfected for disaster response training events at the conference level. In the end, UMCOR was able to conduct 72 mostly remote trainings that reached 1,287 individuals, Martin told the relief agency’s directors during their Oct. 28 virtual meeting.

Two other significant milestones were announced Oct. 28, then celebrated at the Nov. 12 meeting of Global Ministries’ board of directors.

The denomination’s Abundant Health campaign, led by the Global Health unit of Global Ministries, exceeded its goal of reaching 1 million children with lifesaving interventions between 2016 and 2020. “Through the support of our donors, partners, and board members, we reached 1,075,732 children by the end of September 2020,” the Global Health report said.

Affiliated with the United Nations program, “Every Woman Every Child: The Global Strategy for Women’s, Children’s and Adolescent’s Health,” the Abundant Health campaign focused on communities, primarily in Africa, with high child mortality rates from preventable causes.

An Africa agricultural program is in development, a follow-up to the first-of-its-kind agricultural summit in January 2019 sponsored by Global Ministries and UMCOR, with representatives from all African countries where The United Methodist Church is in mission.

During that summit, Sierra Leone Bishop John K. Yambasu, vice president of Global Ministries, said the church in Africa has the potential of becoming self-sustaining if it develops its vast land into viable commercial enterprises.

Yambasu died tragically in an August car accident and the program will be named in his honor. An initial agricultural grant of $300,000 for Sierra Leone is expected to be approved at the December UMCOR board meeting. 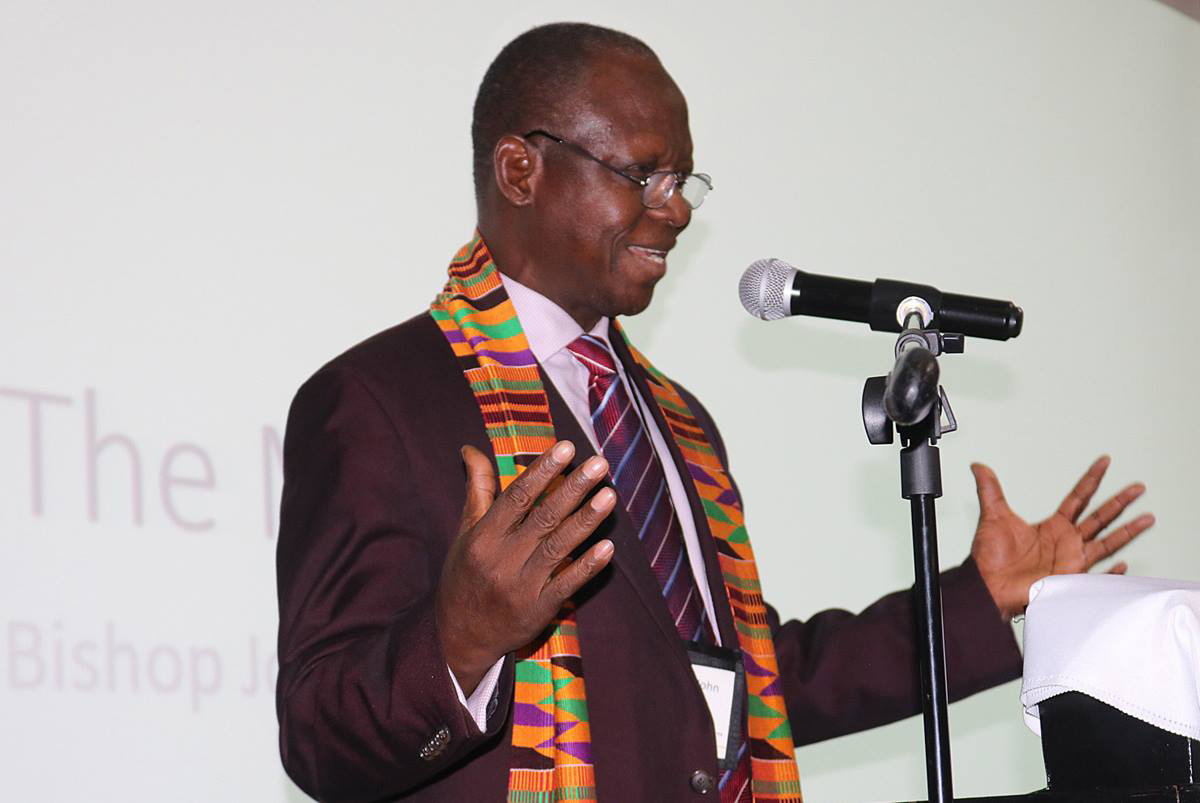 Sierra Leone Bishop John K. Yambasu speaks during the United Methodist Africa agricultural summit Jan. 13-16, 2019, in Johannesburg, South Africa. The United Methodist Board of Global Ministries is recognizing the late bishop’s support of agricultural mission work by naming a new agricultural initiative after him. File photo by Eveline Chikwanah, UMNS.
The mission agency’s work in disaster relief, health and sustainability continues even in the face of budget cuts and staff reductions over the past few years.

The Asian tsunami in late 2004 and Hurricane Katrina in the U.S. in 2005 generated $110 million in donations for UMCOR’s response. But that level of funding has changed, said Roland Fernandes, top executive for Global Ministries and UMCOR.

“There’s been a decline in income, that’s one reality we’ve got to face,” he said during the Oct. 28 meeting, where UMCOR directors approved $1.15 million in new grants and authorized $6.4 million in disbursements.

In the U.S., the largest disaster response grant was $370,000 to the Alabama-West Florida Conference for its response to the damage left by Hurricane Sally in September.

To make a donation to UMCOR’s International Disaster Response, use Advance #982450.

Give to the UMCOR’s U.S. Disaster Response and Recovery through Advance #901670.

Give to Global Health programs through Advance # 3021770.
As with many U.S. disasters, Early Response Teams were the first outside volunteers to assist with United Methodist relief work in Alabama-West Florida. The South Carolina Conference, for example, sent an ERT team each week from Sept. 21-25 and Sept. 28-Oct. 2.

The project using the UMCOR grant will focus on unmet home repair needs in rural Marlow, an unincorporated community near Fish River, Alabama, in south Baldwin County, which has a large Hispanic population. In total, 37 households will receive reconstruction assistance.

However, the combined effect of the COVID-19 pandemic, the continuing long-term recovery of Hurricane Michael, widespread damage from Sally “and the unprecedented number of disasters” means that contractors will be hired to complete much of the repair and rebuilding work.

The conference does hope to recruit and safely house volunteer teams in an attempt to assist an additional 26 households.

A total of $180,978 was approved for large international disaster response grants, including $81,605 to the Davao Episcopal Area disaster management office to mitigate the risk of flooding. The constructing of four pedestrian bridges will allow residents of Barangay Lamlahakby in Mindanao, Philippines, to safely evacuate and remain connected to essential services.

That pedestrian bridge project is an example of the type of international mitigation programing that UMCOR hopes to expand in 2021, said Katie Hills Uzoka, senior manager for international disaster response.

Overall, her unit awarded 35 grants in 16 countries this year, totaling more than $2.9 million, and closing 21 completed projects, she said. “A majority of our responses have been to cyclones and flooding,” she added.

Directors approved $607,040 in Global Health grants in Africa for Imagine No Malaria, maternal and child health and the strengthening of United Methodist health systems. 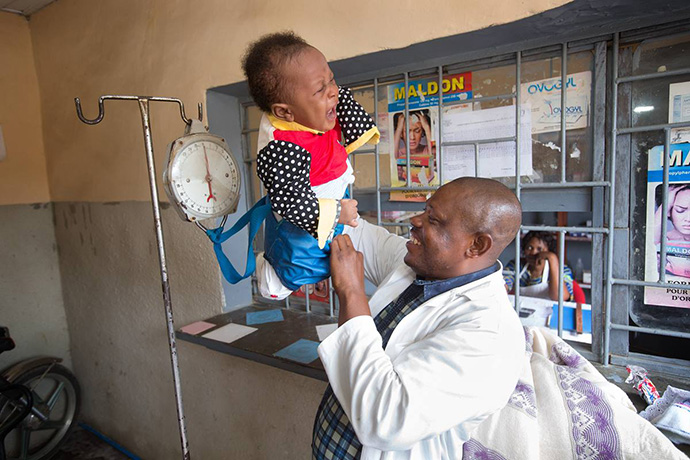 Lofato Feliobola removes a baby from the seat used to weigh him at The United Methodist Church's Mangobo Health Center in Kisangani, Democratic Republic of Congo. The denomination’s Abundant Health campaign, coordinated by the Global Health unit of the United Methodist Board of Global Ministries, completed its goal of reaching one million children with lifesaving interventions by 2020. File photo by Mike DuBose, UMNS.
Also in 2020, the Sheltering in Love Rapid Response program for COVID-19 relief provided over $2.3 million in 230 grants in 54 episcopal areas, 43 countries and 43 U.S. states and territories.

Migration continues to be a focus for The United Methodist Church and to illustrate that work, the Rev. Jack Amick used a “gaps, maps and light” approach that also allows for flexibility in a time of pandemic.

The “maps” part includes a framework for providing goods and services in different locations — on either side of the U.S.-Mexico border; in Latin American countries where churches have set up ministries to assist migrants; or even in a refugee camp in South Sudan. It also can mean, where possible, helping transport migrants or displaced persons to connect them with relatives.

Ministry to migrants has continued during the pandemic, but sometimes “in ways they didn’t expect,” Amick said in an interview with UM News. In some cases, churches have set up ministries to assist migrants who have then had to stay and quarantine.

Changes by the U.S. government related to asylum-seekers and the U.S. public health mandate to close its borders — leaving “thousands of people to be stuck in really bad conditions in Mexico” — has had an impact on migrant ministries near the border, Amick noted.

A ministry in the Rio Grande Valley “is retooling to find ways they can help undocumented people in their area,” while services at the border are suspended, he said. That might include identifying people who would benefit from skills development and helping them attend community college.

Other examples of retooling to fill gaps include helping church-related shelters for asylum seekers on the U.S side of the border retain staff and capacity and buying a commercial refrigerator for fresh vegetables for the Holding Institute, a United Methodist Women national mission institution in Laredo, Texas.

An UMCOR grant to Church World Service is providing “light” as it supports a call system for information for asylum seekers. In recent months, Amick explained, the call system has become a COVID hotline for undocumented immigrants seeking advice or translation help about services available to them.

Executive director Rob Rutland-Brown told UMCOR directors that new sites in Lexington, Kentucky, and Fayetteville, North Carolina, were opened in 2020. The program currently is working with teams planning new locations in the Delaware Valley and Texas.

Funds from the United Methodist Committee on Relief’s International Disaster Response program helped purchase food and other supplies for people in Beni who have fled attacks in outlying areas.
Evangelism

What began as a small way for Booneville United Methodist Church to reach out to the community has blossomed into an annual event attracting hundreds.
Mission and Ministry

More than 350 homes have been built by teams in collaboration with Maua Methodist Hospital in Kenya, and generous gifts through the Center for Health and Hope in Colorado are adding to that number.