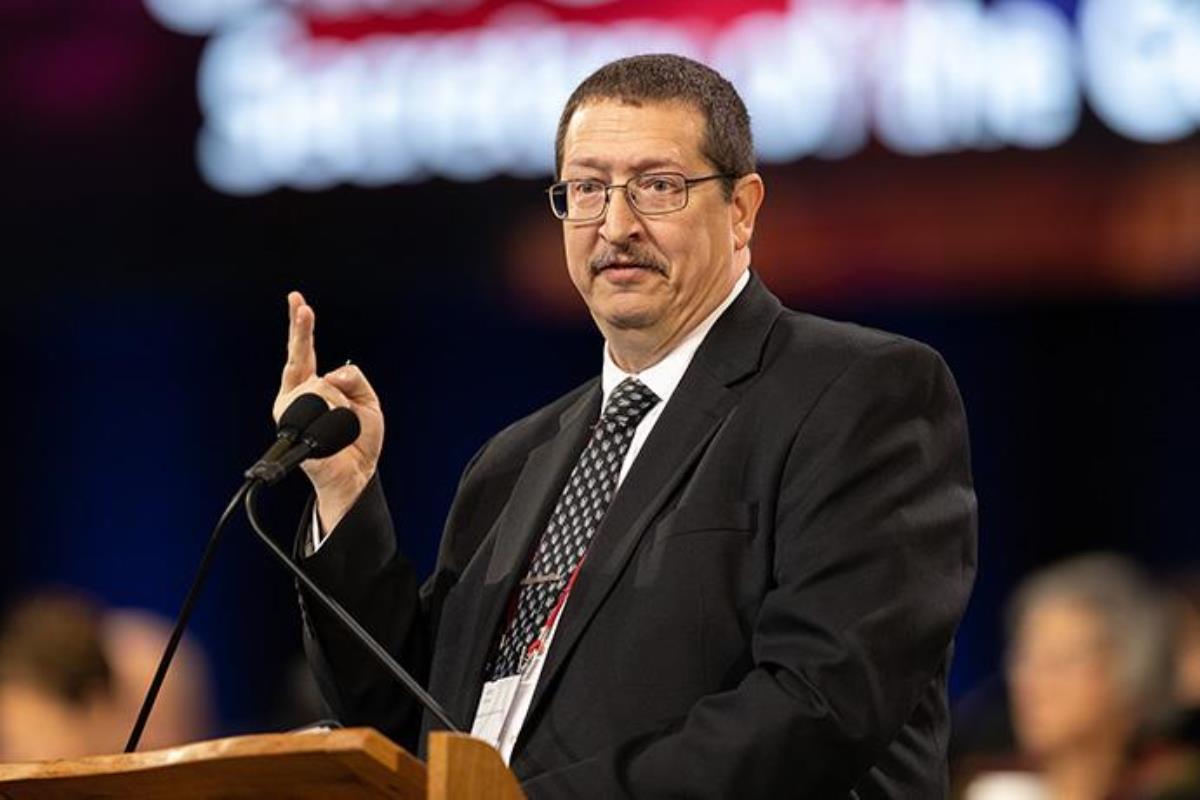 The Rev. Gary Graves gives instructions to delegates during the 2019 United Methodist General Conference in St. Louis. General Conference organizers are forming two teams to look at visas and logistics in hopes of preventing further delay of the denomination’s top lawmaking assembly after its postponement to 2024. Graves is General Conference secretary. File photo by Mike DuBose, UM News.

General Conference organizers are looking at strategies to prevent further delays of The United Methodist Church’s top lawmaking assembly beyond 2024.

At its online meeting March 28, the Commission on the General Conference approved the formation of two strategy teams — one focused on visas and the other on logistics.

With the new teams, the commission members hope to overcome the two main obstacles that have blocked General Conference from going forward amid the COVID-19 pandemic.

“I am definitely in favor personally that we have a General Conference in which we are all in the same space,” said the Rev. Juliet Spencer, the commission member who proposed the strategy teams.

“I just don’t want us to be caught two years from now or a year and a half from now saying, ‘Oops, we still can’t have it in person.’”

Citing long waits for U.S. visas, the commission announced earlier this month that it was delaying the international legislative meeting from August this year to 2024.

The Commission on the General Conference opened its online meeting with a time of remembrance for Ellen Natt.

Natt, a commission member since 2012, passed away after the commission’s most recent meeting on Feb. 24. Natt was not only a leader in the global church but also among her fellow United Methodists in Liberia. She was the president of United Methodist Women in Liberia from 2010 to 2014.

Kim Simpson, the commission’s chair, told commission members that she did not have any details about Natt’s passing. But Simpson and others lifted up the impact of Natt’s ministry.

“I can just remember her booming voice and her cheerfulness,” Simpson said. “She was always happy and interested in whatever you were doing.”

Simpson added that Natt served faithfully with humility and joy.

With Natt’s passing and the resignation of another member, the Council of Bishops will name two new members to the commission.

General Conference draws delegates from four continents, and some countries are seeing visa waits of more than a year because of pandemic-caused backlogs.

The decision marked the third COVID-related delay of what many expected to be a pivotal General Conference. The coming assembly faces multiple proposals for a denominational separation after decades of intensifying debate and defiance of church bans on gay weddings and “self-avowed practicing” gay clergy.

United Methodists met the news of the third postponement from May 2020 with a range of emotions including anger and relief. One member resigned from the commission in protest.

At the same time, a group of theological conservatives announced that they were moving up the launch date of a breakaway denomination — the Global Methodist Church — to May 1 rather than waiting for General Conference. Still, another group of delegates and other leaders urged hope for The United Methodist Church’s future.

United Methodist bishops also are wrestling with what the delay means for church disaffiliations and other big church decisions.

In the meantime, the commission continues to plan to hold General Conference in 2024, despite what unforeseen circumstances might occur.

“The impacts of COVID-19 cannot continue to affect The United Methodist Church and the General Conference’s ability to meet,” said Spencer’s motion for the strategy teams’ formation. “Creativity of solutions and expertise in the areas of technology, travel and others must be leaned upon to develop a plan.”

The new strategy teams will serve in an advisory capacity, with the commission as a whole making any decisions in General Conference planning.

The visa strategy team will look at how wait times for entry visas vary from country to country and identify the processes needed to ensure adequate timing for visas.

The event logistics team will identify meeting options for General Conference, including what technology is up to the task of serving a denomination that crosses 16 time zones and multiple languages.

Each of the strategy teams will consist of three commission members and one of the bishops who serve with the commission with voice but not vote. The teams also can call on additional United Methodists with skills related to their particular focus. Most commission members have volunteered to serve on one or either of the teams. The commission’s executive committee will appoint each team’s members.

The commission has not yet announced the exact dates and location for General Conference in 2024.

Hotchkiss told the commission that negotiations are underway to wind down the contracts in Minneapolis — the initial host of the 2020 General Conference. The negotiations do affect contracts with the 2024 location, Hotchkiss said.

The commission plans to meet next to ratify the terms reached with Minneapolis vendors.

Graves also expects to ask the Judicial Council for clarity on what needs to be done should this be seen as a postponed General Conference instead of a new assembly.

Graves told United Methodist News that he and others are reviewing previous Judicial Council decisions as well as General Conference processes to determine the exact questions the church court will need to address.

Ultimately, the full commission will vote on what questions to send to the Judicial Council.

Kim Simpson, the commission chair, said that delaying General Conference was a hard decision for everyone involved.

“It was accepted in some places and not accepted in others. And I think all of our work will be that way,” she told her fellow commission members. “But we have to do what we think is best to be able to let the delegates do their best work, which is what we’re called to do.”