Discussions about the future of The United Methodist Church are quietly occurring among leaders, after a recent special session of General Conference that underscored deep divisions over homosexuality.

A group of centrists and progressives — including some U.S. bishops — are meeting to consider options for the “broad center,” said the Rev. Adam Hamilton. He’s founding pastor of the Leawood, Kansas-based United Methodist Church of the Resurrection, the denomination’s largest U.S. congregation in weekly attendance.

Meanwhile, the Rev. Keith Boyette, president of the Wesleyan Covenant Association that successfully pushed for strengthening restrictions against same-sex unions and ordination of openly gay clergy, said he’s been part of difficult dialogue with leaders on the other side.

Boyette said the talks are about dealing with the denomination’s conflict, including avoiding at General Conference 2020 in Minneapolis the kind of rancor that characterized the Feb. 23-26 meeting held in St. Louis.

“That’s certainly the goal of this dialogue. Whether that would be achievable, it’s too early to know,” Boyette said.

General Conference 2019 saw passage of the Traditional Plan, which retains the church’s policy that the practice of homosexuality is “incompatible with Christian teaching” and strengthens enforcement of bans on same-sex unions and ordination of “self-avowed practicing” gay clergy.

Defeated was the One Church Plan, backed by most bishops, which would have removed the “incompatible” language and given churches and conferences leeway on same-sex unions and ordination.

The denomination’s Judicial Council is set to review later this month the constitutionality of parts of the Traditional Plan, as well as an approved petition — previously ruled unconstitutional — to let churches leave the denomination with their property.

The vote for the Traditional Plan was 438-384, and pushback has been considerable in the U.S. and in Europe.

“We’re not OK with treating gay and lesbian people in our churches as second-class Christians,” said Hamilton. 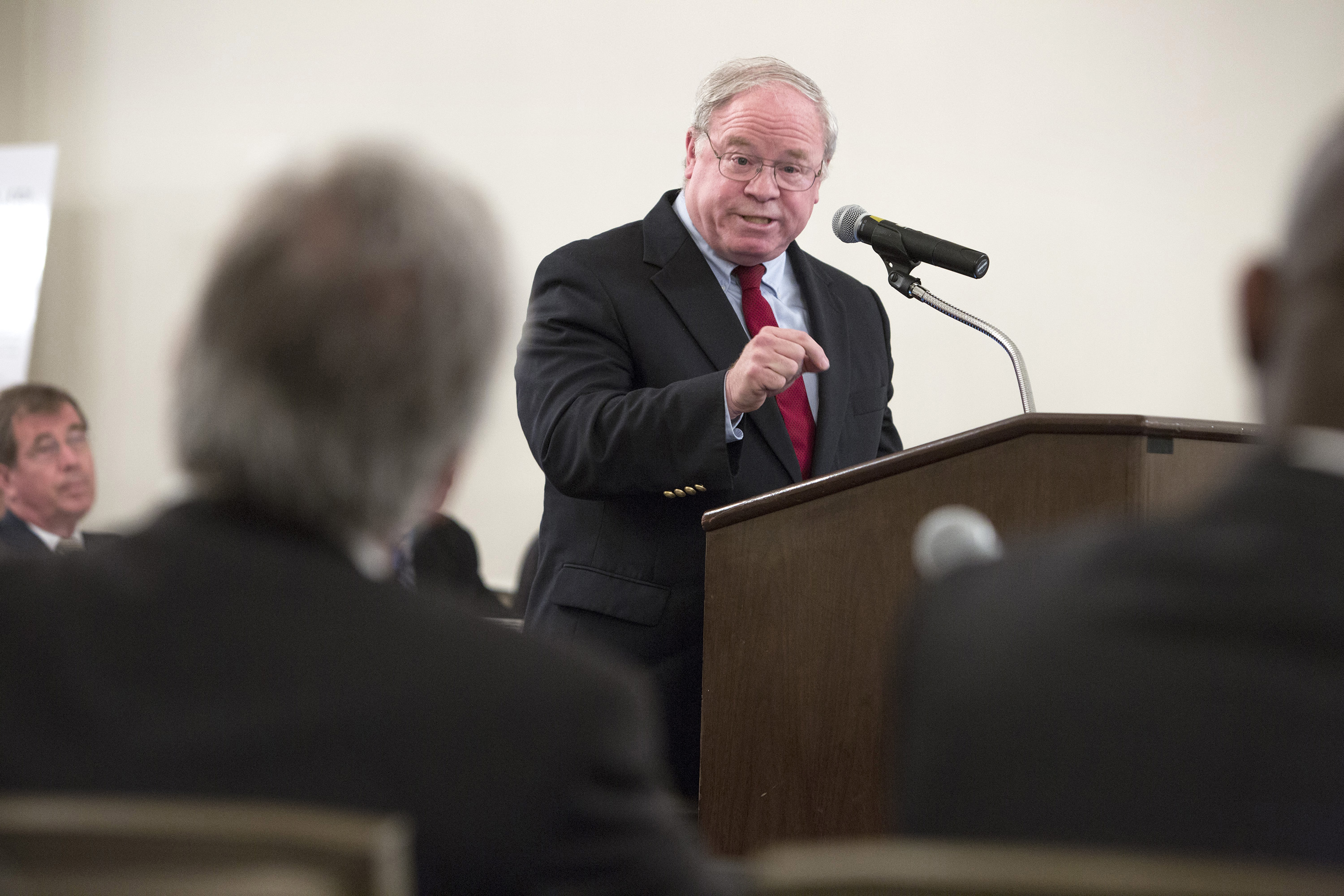 The Rev. Keith Boyette, president of the Wesleyan Covenant Association, responds to questions from Judicial Council members during an oral hearing on May 22, 2018, in Evanston, Ill. Boyette said he's been part of discussions about the future of The United Methodist Church. Photo by Kathleen Barry, UMNS.

Traditionalists counter that LGBTQ persons are of sacred worth and welcome in United Methodist churches, but that Scripture and Christian tradition oppose same-sex unions and ordination of gay clergy.

Hamilton said he and other centrist leaders began right after General Conference to talk about strategizing, quickly concluding that progressive leaders should be involved.

He said a group of 30 clergy and laity, among them North Texas Conference Bishop Mike McKee and a few other bishops, met for six hours in Dallas last week. He said progressives as well as centrists were involved, and pastors as well as laity.

A meeting of about the same size, including Hamilton and a handful of others who convened the Dallas gathering, will be held in Atlanta on April 4. Bishop Sue Haupert-Johnson of the North Georgia Conference will be part of the Atlanta meeting.

"I want to be part of any conversation that will help our church to be a loving witness to the world," Haupert-Johnson said.

The Rev. Tom Berlin, a member of the Commission on a Way Forward that at the Council of Bishops’ request came up with legislative plans for General Conference 2019, was in the Dallas meeting and plans to be in the Atlanta meeting.

“It’s interested parties getting together to talk about the future,” said Berlin, pastor of Floris United Methodist Church in Herndon, Virginia. “It’s not an official group. … It doesn’t even have a name.”

Like Hamilton, Berlin described those involved as united by their response to the outcome of General Conference 2019.

“We’re a group of people that find the punitive measures of the Traditional Plan unacceptable,” he said.

The Rev. Junius Dotson, top executive of Discipleship Ministries, was unable to be at the Dallas meeting but plans to attend in Atlanta.

“My hope is that these types of conversations will allow people to process (General Conference 2019), but also to think, dream, from a different perspective,” he said.

Dotson added that as an African American leader, he hopes to be a voice for inclusion and a reminder that many in his race stuck with the denomination through segregation.

“I would hate that the issue of race is subjugated because I believe in a lot of ways it drives the divide we have,” he said.

Both Hamilton and Berlin stressed the Dallas and Atlanta discussions are preliminary. Hamilton said a third, much larger meeting has been tentatively scheduled for May 20-22 at Church of the Resurrection and would likely involve representatives from every U.S. annual conference.

One day after the March 27 Dallas meeting, Hamilton gave a talk to the Perkins Theological School for the Laity.

Toward the end, he mentioned “two possible pathways” for centrists and progressives.

Hamilton added that “if it’s uncomfortable enough” then traditionalist churches may choose to leave and form their own denomination, especially if they can retain their property.

In an interview, Hamilton noted that the WCA has openly discussed leaving. However, he added that traditionalists demonstrated at General Conference 2019 their strength in the denomination.

“I would say that there was a lot of energy (at the Dallas meeting) around ‘stay’ and make for a gracious exit for the WCA. But there was a recognition that WCA has more votes than the centrists and progressives have,” Hamilton said.

The second pathway, he told the Perkins group, would be “creating two new Methodisms out of one existing United Methodism.”

But after his talk, Hamilton acknowledged that splitting into two denominations would be much more difficult logistically than one group choosing to leave.

Boyette said he was in discussion with supporters of the One Church Plan. He would not offer names or share whether any are bishops, citing a confidentiality agreement. Nor would he talk about options discussed.

But Boyette said the talks had led him to have conference calls with regional WCA leaders, and to survey them about what’s been under discussion.

“That survey will be discussed at our council when it meets on Wednesday (April 3) and will inform our participation in the ongoing conversations,” he said.

Boyette acknowledged that resistance to the Traditional Plan’s passage has been widespread.

“It’s unsettling to see segments of the church reject the discernment of General Conference,” he said. “It does illustrate the deep divisions that we’ve been pointing out for quite a while.”

As to whether the WCA and like-minded churches are currently inclined to go their own way — especially if centrists and progressives would unite behind passing a constitutional exit petition — Boyette would not say.

“All options are on the table for the Wesleyan Covenant Association. We have not closed the door on any potential resolution,” he said.

Berlin and Hamilton both said they favored talks by groups that disagreed at General Conference.

“I think it’s always wise for people of good will to have conversation with each other, especially in times of disagreement and conflict,” Berlin said.

Bishop Kenneth Carter, president of the Council of Bishops, said by email that he favors having a range of talks at this point.

The degree of conflict in the denomination was evident in a statement issued by the Nordic and Baltic Area Group of the Council of the Northern Europe and Eurasia Central Conference.

The group announced it is forming a roundtable with representatives from each annual conference in the area to try to find “as much unity and as much missional strength as possible.”

“The many reactions to the decisions of General Conference across the world indicate it will be very difficult for us to remain together as one denomination in the future,” the statement said. “Several responses and statements in the Nordic and Baltic countries point to a similar division.”

United Methodist centrists and progressives have made common cause in working for the inclusion of LGBTQ people in church life, but a veteran General Conference delegate thinks the coalition could be short-lived.
Human Sexuality