Photo of the Rev. David Wilson, by Ronny Perry, UMNS.

I traveled to Standing Rock with students and faculty from three Oklahoma universities during spring break to help one of the small remaining camps.

It is situated on privately owned land about a mile from the former Osceti Sakowin camp near Cannon Ball, North Dakota. That camp hosted hundreds of thousands of visitors — beginning last summer until early February when the camp was ordered to be closed  — supporting the Standing Rock Sioux Tribe’s fight against the $3.8 billion Dakota Access Pipeline.

It was my eighth trip to Standing Rock, and it was certainly a different place and mood since the large camps closed.

We were amazed by the tenacity of this small group of Native and non-Native folks who were still camping there, holding fast to their commitment to stand up to big oil and preserve water.

During conversations, the campers talked about their time there and the many who advocated and supported the effort to preserve water and Mother Earth.

A student asked, “What is their purpose for camping there as the pipeline is finished and the large camps are gone?”

One of the campers said it was because of the commitment that they made to stand up for what is right, and to do their part to remind the world about what is going on with the preservation of water.

Although oil may soon be flowing under the massive Missouri River, Standing Rock organizers and related entities are still advocating in other parts of the country for the environment. Water protectors are present in areas that are building pipelines in states including Oklahoma, Texas, Florida, New Jersey, Arkansas, West Virginia and Louisiana. They are helping to organize movements and resistance to help educate the world regarding the harm these pipelines will cause the environment.

Ironically, last week, the same company that financed the Dakota Access Pipeline was ordered to stop drilling a natural gas pipeline in Ohio after millions of gallons of a drilling lubricant spilled into area wetlands. 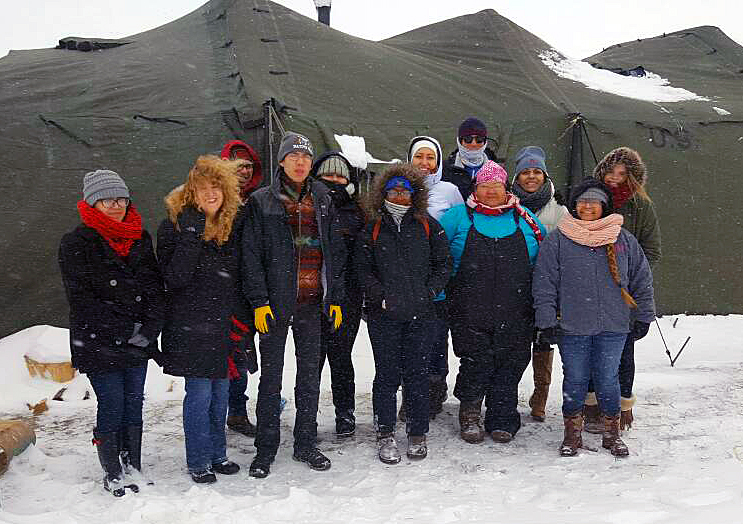 A group of students and faculty from three Oklahoma universities spent their spring break helping at one of the remaining camps at Standing Rock near Cannon Ball, North Dakota. The camp is on privately owned land. Photo by the Rev. David Wilson, UMNS.

Organizers from Standing Rock and other entities now have turned their attention to what people listen to in this country: money.

The emerging issue that has evolved since the Dakota Access Pipeline was permitted to continue through the executive orders of President Donald Trump is the call for banks and individuals to divest in companies that are financing and connected to the pipeline.

According to the website defunddapl.org, which is maintained by several groups involved in the water protector movement that protested DAPL near the Standing Rock Sioux reservation, individuals have taken away approximately $80 million in deposits from DAPL banks, while cities, tribes and other entities from around the world have divested those banks of more than $4 billion dollars.  The city of Seattle remains the biggest de-funder to date, having voted to remove more than $3 billion in deposits from Wells Fargo Bank.

Lobbying by the Sami parliament of Norway, representing the indigenous people of Nordic countries, persuaded its local authority pension fund, KLP, to sell its shares worth $58 million in companies building the pipeline. The Sami are an indigenous people living in the Artic area of Sapmi in the far north of Norway, Sweden, Finland and Russia’s Kola Peninsula.

Conversations continue with our United Methodist pension agency, Wespath Benefits and Investments, which has investments with Energy Partners Transfer, the company behind the pipeline. This is perhaps most challenging and troubling for me as the very entity that manages pensions for me is supporting the companies that many others and I are advocating against, and who are damaging the environment around the world.

We are praying that Wespath will do the right thing and divest from these companies, as well.

Early on, people asked why I was so invested in Standing Rock. When I first learned of the magnitude of what was going on, I knew that the people of the Oklahoma Indian Missionary Conference needed to be involved as the only Native entity of its kind in this country.

Many from the conference asked what we were going to do, and we offered support in many forms. Our main task was to let the people of Standing Rock know that we cared and that we wanted to be people of action to assist in their efforts.

Certainly an important facet of this movement is to hold The United Methodist Church accountable to the many promises that were made by people at all levels — laity, clergy and bishops — during the "Act of Repentance toward Healing Relationships with Indigenous Peoples" at the 2012 General Conference in Tampa, Florida, and at the annual conference level.

Representatives of the Council of Bishops said,  "We confess to God, acknowledging our guilt, resolving to cease the harm, pledging ourselves to live differently, reversing the damage that has been done through our participation in violence, maltreatment and neglect of Native and indigenous peoples so that we may bring about healing and restoration to all."

My hope and prayer is that we can learn from events such as Standing Rock and know that there are thousands around the world who are fighting and advocating for the future of Mother Earth; it is not for us, it is for all of God’s people. We are all in this together.

The Rev. David Wilson is superintendent of the Oklahoma Indian Missionary Conference.

United Methodist centrists and progressives have made common cause in working for the inclusion of LGBTQ people in church life, but a veteran General Conference delegate thinks the coalition could be short-lived.
Multicultural Ministry