While United Methodists from across the U.S. have protested the Dakota Access Pipeline, the agency that oversees the denomination’s pensions has engaged in its own form of advocacy.

Wespath Benefits and Investments, which has investments with the company behind the pipeline, sent a letter in mid-September urging company leaders to talk to affected communities, including the Standing Rock Sioux Tribe.

“We specifically urged the company to communicate a clear strategy for conducting open and ongoing consultation with those affected by the pipeline,” Dave Zellner, Wespath’s chief investment officer, told United Methodist News Service.

For months, leaders of the Standing Rock Sioux, environmentalists and others from across the United States have protested the pipeline, which is intended to bring crude oil from North Dakota to a shipping point in Illinois. Proponents say it will increase U.S. energy independence and provide jobs. 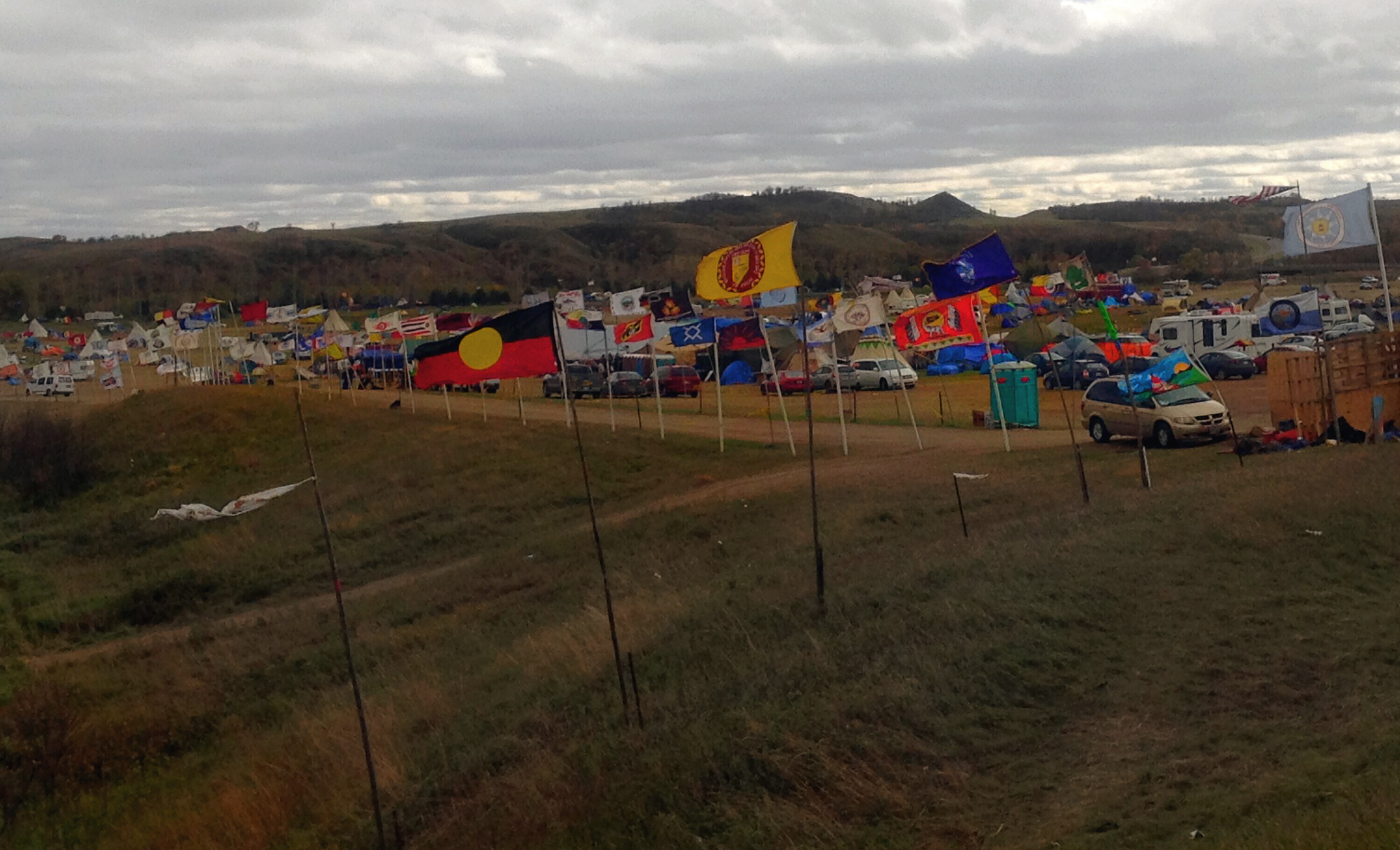 A line of flags marks a campsite near Cannon Ball, N.D., occupied by members of the Standing Rock Sioux Tribe who are protesting the Dakota Access Pipeline.  Photo by Erin Hawkins, United Methodist Commission on Religion and Race.

However, Standing Rock Sioux leaders say the pipeline crosses land sacred to the tribe and could threaten the safety of drinking water. Clergy from across the country, including United Methodists, gathered Nov. 3 to stand in solidarity with the tribe.

The U.S. Army Corps of Engineers on Nov. 14 called for halting construction on corps land bordering Lake Oahe while discussions continue about reducing oil spill risk and protecting the water.

On the night of Nov. 20, law enforcement used water cannons and tear gas in sub-freezing temperatures against protesters who tried to push past a police barricade on a bridge.

At least some United Methodist leaders spoke with gratitude that Wespath made the effort.

“I am happy to hear they’ve done that,” said the Rev. David Wilson, superintendent of the Oklahoma Indian Missionary Conference. He has made three trips to the protesters’ campsite near Cannon Ball, North Dakota, and plans another with a group United Methodists in the coming week.

“People keep asking what they can do, and advocacy is part of that.”

While that sounds like a lot of money, Zellner said the investment is a tiny fraction of Wespath’s total bonds. And it’s a drop in the bucket to the two companies.

Kirsty Jenkinson, Wespath’s managing director of sustainable investment strategies, also noted that as a bondholder, the pension board has less influence than a shareholder.

Bonds basically are loans to companies that will be repaid, while shares give holders part ownership. Owning bonds in a company is less risky than owning shares of that company’s stock.

“We still felt it was important to send a letter to the CEO expressing our concern about the community opposition and the legal challenges to the pipeline,” Jenkinson said.

Wespath has about $1 billion total invested in the energy industry, including renewables as well as fossil fuels. Altogether, Wespath manages about $21 billion in assets on behalf of more than 100,000 participants. It is the largest faith-based pension fund in the United States, and one of the top 150 pension funds in the world.

For now, Zellner said, Wespath has no plans to sell its bonds in Energy Transfer Partners.

“We went to all of our managers that held these bonds and asked them, ‘To what extent have you considered there is a risk in holding these bonds?’ ” he said.

The consensus was that while holding bonds carries some risk, Energy Transfer Partners has such broadly diversified assets, the company would still be a profitable investment even if the pipeline project were scrapped.

Wespath staff repeatedly stress that their agency’s main role is to act as a prudent fiduciary for participants, including thousands of United Methodist clergy. As part of that role, Wespath examines investments for the environmental, social and corporate governance factors that contribute to their sustainability.

However, the agency’s main goal is to serve participants’ financial interests — not advocacy.

“If we think something is a viable investment, we will continue investing,” Zellner said. He said Wespath does what it can to foster good corporate behavior.

He added that other parts of the church have a role to play in promoting justice.

Wilson and a group of more than a dozen United Methodists from the Oklahoma Indian Missionary Conference will take supplies and food to about 1,300 people at the campsite on Nov. 27. Winter weather is already settling in with temperatures dipping into the 20s at night.

“It’s important to do even if one action alone doesn’t result in what you want,” Olson said. “The point is (Energy Transfer Partners) needed to consult with people before building, and that wasn’t done.”

The Rev. Ross Reinhiller leads Faith United Methodist Church in Williston, North Dakota, about 260 miles from the camp. Members of his church, in the heart of the Bakken Oil Field have varied views of the pipeline.

Their community has felt the effects of the oil field’s boom and bust as oil prices have plummeted. Many hope the pipeline will improve the situation.

Faith members generally want to ensure the Standing Rock Sioux have clean water, their pastor said. At the same time, members also respect the young men and women who work on the pipeline and want to see construction completed, Reinhiller said.

“If we were a church that had our eyes off Christ, this would be very hard,” he said. “But this is a church that in the best way that it can wants to support individuals.”

The pastor visited the campsite last week to get a handle on the situation. He too was gratified to learn Wespath was urging dialogue with the tribe.

“I think that’s the wisest approach,” he said. “I think the real resolution is going to come from those who are investors in the pipeline.”