The Rev. Richenda Fairhurst had a wedding earlier this week and needs to be back in her pulpit on Sunday.

But the United Methodist pastor decided to take two flights and an hour-long car ride to get from Washington State to North Dakota, so she can briefly join the Standing Rock Sioux tribe’s protest of the Dakota Access Pipeline.

Fairhurst and hundreds of other clergy from a range of faith traditions will gather Nov. 3 for a “Stand with Standing Rock” event, featuring singing, prayers, and readings from sacred texts.

Flags line the road at a camp near Cannon Ball, N.D., center of protest of the Dakota Access Pipeline. United Methodist pastors will be joining others at the camp on Nov. 3, to support the Standing Rock Sioux, who say the pipeline will cross sacred lands and threaten the local drinking water. Photo by Dave Stucke, Dakotas Conference.

“When the call went out … that they needed clergy to show support, that moral support, I was, ʽSign me up,” said Fairhurst, pastor of Camas United Methodist Church in Camas, Washington. “My heart broke open. I had to go.”

Fairhurst, representing the Pacific Northwest Conference’s Church and Society committee, is hardly the only United Methodist pastor scheduled to be at the Standing Rock Reservation.

The Rev. Susan Mullin, a deacon and director of faith formation at Faith United Methodist Church in St. Anthony, Minnesota, was part of a Minnesota Conference group heading to the gathering in a 12-seat rented van.

Like Fairhurst, Mullin has been involved in pushing the church and others to act on climate change. So opposing the Dakota Access Pipeline provided a dual opportunity.

“It feels right to support (the Standing Rock Sioux) in the decision that they have made, and at the same time support a movement away from fossil fuels and toward cleaner, renewable energy,” she said.

The Dakotas Access Pipeline, a $3.8 billion project of Dallas-based Energy Transfer Partners, is intended to bring crude oil from North Dakota to a shipping point in Illinois. Proponents say it will increase U.S. energy independence and provide jobs.

But leaders of the Standing Rock Sioux say the pipeline is routed across land sacred to the tribe and could threaten drinking water safety.

The U.S. Army Corps of Engineers is reviewing permitting for the project, and President Obama has said the Corps is considering whether the pipeline could be re-routed. 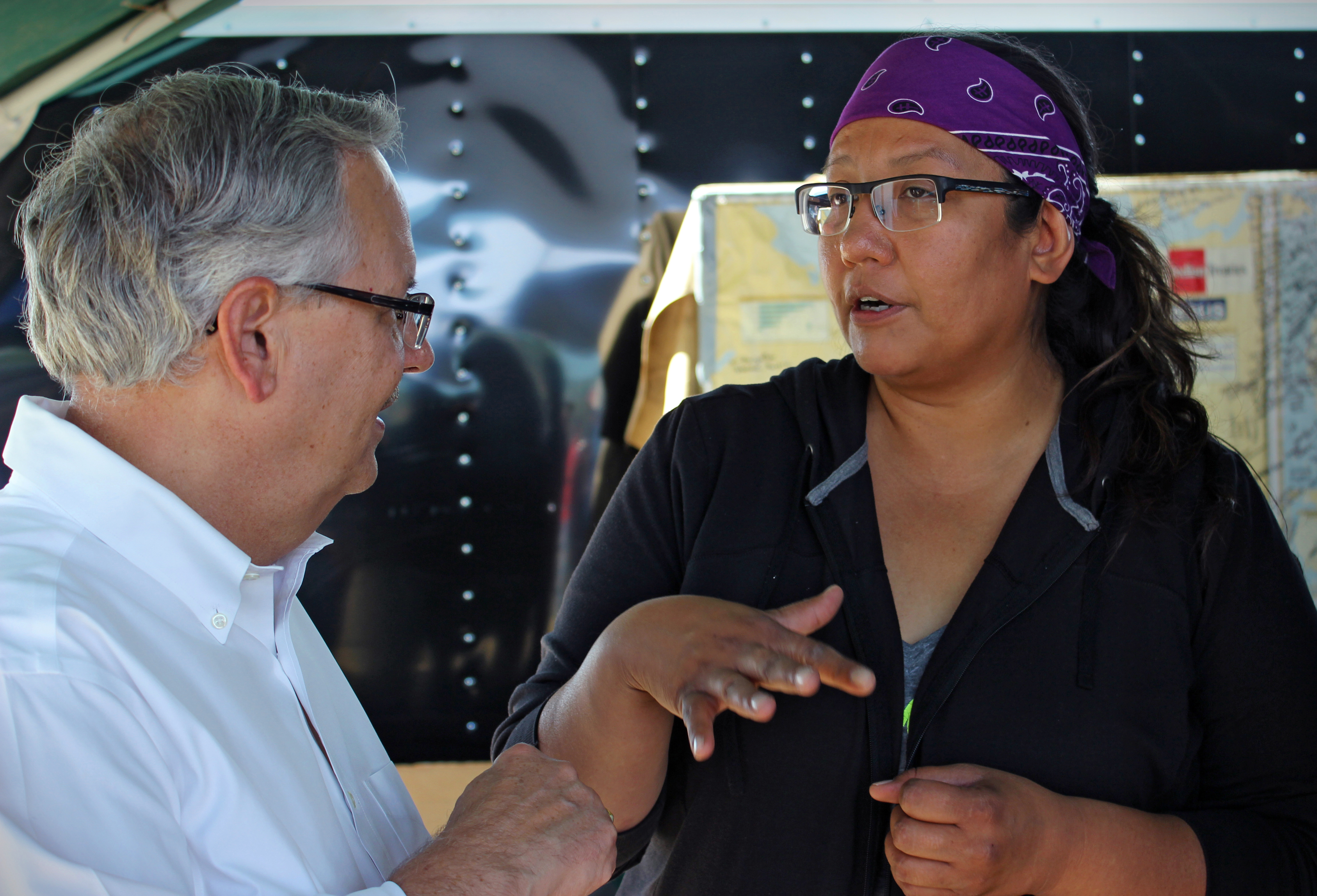 Bishop Bruce Ough and Jennifer Martell of Sitting Bull College met at a camp near Cannon Ball, N.D., on Sept. 10. The camp has been a gathering place for opposition by the Standing Rock Sioux and many others to the Dakota Access Pipeline. Photo by Dave Stucke, Dakotas Conference.

The long protest by the Standing Rock Sioux began to attract media attention months ago and has drawn support from many other tribes, environmentalists, and a range of faith groups. Thousands have visited the main camp site near Cannon Ball, North Dakota, including Dakotas-Minnesota Area Bishop Bruce Ough and top agency leaders, such as the Rev. Susan Henry-Crowe of the United Methodist Board of Church and Society.

The Rev. David Wilson, superintendent of the Oklahoma Indian Missionary Conference, has made three trips. He’s concerned by recent reports of clashes between protesters and authorities on private land where pipeline construction has continued.

“My prayer has been for the safety and well-being of all the people out there,” he said.

Wilson noted that the camp grew over his visits, and has been peaceful. He noted the many tribes represented and said no issue in the recent past “has solidified native people to this magnitude.”

Meanwhile, United Methodists have been engaged in the Standing Rock controversy in a number of ways, and the pace seems to be quickening.

More than 1 million have people have expressed support for the Standing Rock Sioux protest in recent days via Facebook, National Public Radio reports.

And more than 450 clergy from varying faith traditions have registered to attend the Nov. 3 event.

The call for clergy to come was made Oct. 25 by the Rev. John Floberg, supervisor of Episcopal churches on the North Dakota side of Standing Rock. The reservation also includes part of South Dakota.

“Our duty as people of faith and clergy could not be clearer: to stand on the side of the oppressed and to pray for God’s mercy in these challenging times,” he said in an open letter.

That resonated with Fairhurst. Though she knows her first visit to Standing Rock will be short, she’s already thinking ahead.