Forty years ago, as a high school student, Jane Graner felt a call to ordained ministry in The United Methodist Church. It came not long after she discovered she was gay.

The events were, to some degree, related.

“I thought my journey could be helpful to others,” said Graner, a cradle United Methodist. “And I thought naively that by the time I got through high school and college and seminary, there wouldn’t be any problem with being an openly gay ordained person in The United Methodist Church.”

Graner can now answer her call fully. At age 57, and 23 years after earning a seminary degree, she was ordained an elder in the North Texas Conference during a June 3 worship service at Christ United Methodist Church.

Wearing her late mother’s cross and with her late father’s Rotary medallion in her pocket, Graner got hands laid on her and accepted her stole with 19 others becoming fully connected elders or deacons.

“This has taken so long to get here, and it feels wonderful,” a teary Graner said afterwards.

Graner, while outspoken about being gay, has been single since her 28-year-partnership with another woman ended some years back.

North Texas Conference Bishop Michael McKee said the conference’s Board of Ordained Ministry and Clergy Conference were within the Book of Discipline to approve her ordination, given that she’s self-avowed but non-practicing in her homosexuality.

“I look at those 20 people, and the future is in very good hands — all the people I ordained tonight,” McKee said after the June 3 service.

McKee has known Graner for decades, having once been her youth minister in Fort Worth, Texas, where she grew up.

“She was always bright, intelligent and faithful,” he said.

Other conferences have ordained openly gay persons, and Mountain Sky Area Bishop Karen Oliveto, a lesbian married to another woman, was elected and consecrated a bishop in 2016.

‘To the best of our knowledge, Jane is the first openly LGBTQ person to move through the process and be ordained in either of the southern (U.S.) jurisdictions,” Young said. 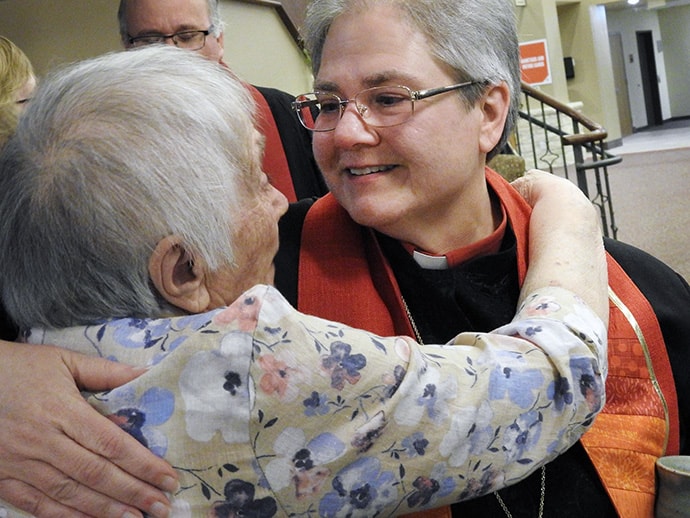 The Rev. Jane Graner accepts congratulations after being ordained an elder during a June 3 service at Christ United Methodist Church in Plano, Texas. Graner, 57, is believed to be the first openly gay person ordained an elder in either of the southern jurisdictions of The United Methodist Church. Church law prohibits ordination of “self-avowed practicing” homosexuals, but Graner is single, a fact North Texas Conference officials noted when asked about her ordination. Photo by Sam Hodges, UM News.

Graner earned a master’s degree at Perkins School of Theology in 1996. She worked in lay ministry for many years.

As a lay person serving as assistant minister for discipleship at Northgate United Methodist Church in Irving, Texas, Graner was encouraged by her pastor, the Rev. Gregory Neal, to pursue joining the clergy.

Neal’s a strong supporter of removing restrictions banning LGBTQ persons in ordained ministry, but he said Graner’s skill set and commitment were the real reasons he pushed her.

“It became obvious to me that she really and truly was a superb candidate,” said Neal, now pastor at First United Methodist Church in Farmersville, Texas.

With Neal’s support — it didn’t hurt that he was on the district committee on ordained ministry — Graner became a licensed local pastor in 2013.

In that status, she’s led Oak Haven United Methodist Church in Irving the past six years.

Graner was commissioned as a provisional member of the conference clergy three years ago and was on track to be ordained last year. But she was deferred for a year.

She said she was always candid about her sexuality in interviews with the board. Whether the delay owed to that or an inadequate answer she gave to a theological question, she’s not sure.

But Graner is glad her ordination came this year, as The United Methodist Church has seen widespread resistance to 2019 General Conference, which strengthened official restrictions against same-sex unions and ordination of self-professed practicing homosexuals.

“Within days after General Conference, I saw the way the Holy Spirit was working in the church,” Graner said in a video of ordinands played during the North Texas Conference gathering. “It’s like the Holy Spirit woke this church up.”

Next month, Graner begins a new appointment as pastor of Trinity United Methodist Church in Duncanville, Texas. For now, she’s accepting congratulations and expressions of gratitude.

“I hadn’t left the sanctuary (after ordination) but two minutes when a young woman I did not know came up to me, hugged me and said, `Thank you. Now I know this is possible,’” Graner said.

Among those cheering Graner on has been Patti Owen, lay leader at Oak Haven United Methodist. She said Graner had been a strong leader for the church, particularly as a teacher and preacher.