The Rev. Lea Matthews called her ordination day “joyful,” but still fraught with “complexity and complications,” since she is the latest LGBTQ person to be awarded credentials in violation of rules in the United Methodist Book of Discipline.

“I had to hold the complexity of the moment, which was the larger context of the denomination being in absolute crisis,” Matthews said in an interview with United Methodist News. “To know that as I stepped onto that stage and knelt down, so many of my queer siblings across the connection are not able to do that and have been greatly harmed or explicitly excluded.”

The Book of Discipline says that the practice of homosexuality is incompatible with Christian teaching, and bars “self-avowed practicing homosexuals” from ordination in the church. Despite passage of  legislation during General Conference 2019 that confirmed this stance and toughened penalties, resistance has been strong. LGBTQ people have been commissioned or ordained in the Baltimore-Washington, Michigan, North Texas, and Northern Illinois conferences in the past month.

Between 10 to 15 people protested during the annual conference in support of the church’s ban on LGBTQ people being ordained, according to the New York Conference website. The protesters did not disrupt the ordination ceremony. 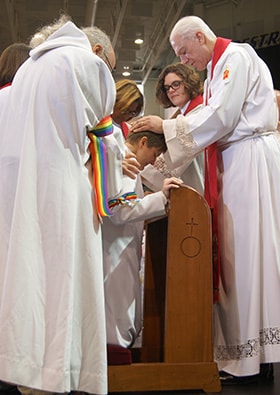 Bishop Thomas J. Bickerton (right) ordains the Rev. Lea Matthews as a deacon in full connection during the New York Annual Conference meeting. Also pictured, from right, are the Revs. K Karpen, Denise Smartt Sears and Heather Sinclair. Photo by Stephanie Parsons, NYAC.
“The strong affirmation from the Board of Ordained Ministry and the overwhelming support expressed from the clergy session were clear confirmations of the amazing gifts that Lea possesses,” said Bishop Thomas J. Bickerton, resident bishop of the New York Area. “Her call is deep and clear, as is her effectiveness. She truly is a gift to the church.”

Matthews was called to ministry as a Baptist pre-teenager in Hattiesburg, Mississippi, she said.

“I came out at age 17 and was told that there was no place in Christian ministry for me,” Matthews said. “So overnight, I lost the embrace and the affirmation and the inclusion in that body of believers that had been my spiritual home and site of experiencing God.”

Instead, she became a teacher and taught English in public schools in the Bronx for a decade. She considered the job as a ministry. After “pew hopping” for a while, Matthews joined Christ Church United Methodist in New York.

“I fell in love with Wesleyan theology, practical theology that sees no holiness outside of social holiness,” she said. “And I fell deeply in love with radical grace through the Methodist tradition. It was quite a surprise when that grace didn’t extend to me, according to the Book of Discipline.”

Despite her love of teaching, she started to feel like “my soul wasn’t settled.”

“It was with some courage and some stupidity that I finally decided to go to seminary and take a complete leap of faith into a denomination that was still deeming me incompatible with Christian teachings,” Matthews said.

Matthews, a graduate of Union Theological Seminary, has worked at St. Paul and St. Andrew United Methodist Church for four years. She became associate pastor after being commissioned as a deacon in 2016.

“Like most church workers, my portfolio is laughably large,” Matthews said.

The children and family minister and young adult minister, she also organizes the church’s sanctuary movement and anti-racism work and preaches. She is in charge of baptisms, new memberships and adult education classes, does interreligious justice work, responds pastorally to the needs of the congregation and helps coordinate the congregational care ministry.

“I have known many pastors in my life, and I can unequivocally say that Lea is one of the most skilled, passionate, faithful and principled pastors I have encountered. … The hardest thing for me this year was knowing that my friend and gifted colleague, who has sacrificed so much to give so much to this church, would have to worry about protests and negative personal attention in a week that should have been full of nothing but joy and affirmation for her and her family.”

Matthews said she believes the church will be radically different in years to come, as the debate over sexuality plays out.

“If I didn’t believe that there was a possibility of that, then I wouldn’t call myself a Christian and I wouldn’t presume to know what God can make out of this mess,” Matthews said.

“We have unresolved racism, we have unchecked patriarchy, we have a rampant colonialism, that all have to change in order to become closer to the kingdom of God.”