After long wishing that United Methodists could remain together in one body, Bishop Cynthia Fierro Harvey acknowledged that the time has come when some will break away.

“Every part of the body is important to the whole,” Harvey preached April 25 during her final address as the Council of Bishops president. “I also realize that it might be time to bless and send our sisters and brothers who cannot remain under the big tent.”

She spoke as the week’s Council of Bishops meeting got underway — just days before the planned May 1 launch of the Global Methodist Church, a new theologically conservative Methodist expression.

Harvey based her address on Romans 12, in which Paul proclaims: “We are one body in Christ, and individually we belong to each other.”

She expressed grief that some people have decided they belong elsewhere. However, Harvey also shared her hopes that the international United Methodist Church will remain a big tent — a welcoming home to Christians no matter their sexual or theological orientation.

“I believe in The United Methodist Church, and I believe in you,” she told her episcopal colleagues and those watching the bishops meet via Facebook. “Continue to be the people of God that boldly and courageously tells the story of a church that is big enough for the left, the right and the in-between.” 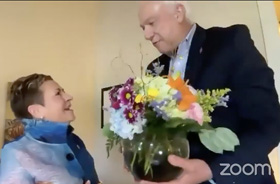 New York Conference Bishop Thomas Bickerton (right), president-designate, surprised current Council of Bishops President Cynthia Fierro Harvey by showing up at her Louisiana office and presenting her with flowers from the council in gratitude for her service as president. During her two-year tenure, the bishops have met more frequently with all meetings done online. Screengrab courtesy of the Council of Bishops via Zoom by UM News.

Harvey, the first Hispanic woman elected Council of Bishops president, has served during a tumultuous time inside and outside the church. She stepped into the office of president in spring 2020, shortly after the COVID-19 pandemic shut down travel and most activities around the globe. She steps down from the role as United Methodists in coordination with the United Methodist Committee on Relief are working to help refugees and other people displaced by Russia’s invasion of Ukraine.

Harvey, who leads the Louisiana Conference, also has helped guide the church’s response to multiple floods, tornadoes and hurricanes in the storm-battered state.

In her two-year tenure as president, the bishops have met more frequently, but every meeting has been virtual. The bishops also have dealt with increasingly strained denominational ties as the pandemic has disrupted so much of church operations including what many expected to be a pivotal General Conference.

Even before COVID became a household word, the denomination’s top legislative assembly faced multiple proposals to divide after decades of intensifying debate over LGBTQ inclusion. When complications from COVID led to the third postponement of General Conference from 2020 to 2024, the Global Methodist Church organizers decided they no longer wanted to wait to start something new.

However, the lack of a formal separation plan has left bishops grappling with how to handle church disaffiliations and other possible divisions while also meeting the denomination’s pension obligations and other commitments to ministry.

Harvey said she now understands why the Book of Discipline, the denomination’s policy book, is often vague or complicated on matters of separation.

While today’s moves toward disaffiliations go forward amid an unprecedented General Conference delay, denominational separations are nothing new for the people called Methodist. After all, Methodism founder John Wesley ushered in the first split himself by encouraging the launch of the Methodist Episcopal Church in 1784 — a new U.S. denomination entirely independent of Wesley’s home Church of England.

For the next 200 years, Methodism’s history would be one of breaking up and making up.

More about Council of Bishops meeting

The bishops heard a little bit more about that history during their April 25 meeting as part of an update on the bishops’ ongoing work toward anti-racism.

Discussing race in the context of denominational separation and reconciliation makes sense, said a group of panelists who have studied and, in some cases, lived part of that history.

“Race has been at the heart of a majority of our past splits, and it has yet to be thoroughly discerned in an effective, transformative and liberated manner in our mergers,” said Ashley Boggan Dreff, the top executive of the United Methodist Commission on Archives and History. The agency plans to release several resources around the theme of “Splits, Separations and Reconciliations” for Heritage Sunday on May 22 this year.

In the first 100 years of Methodism in America, Dreff said, eight breakaway groups name race as either the primary or the secondary reason for departure. That included predominantly Black denominations that broke away because of the discrimination they faced in predominantly white congregations. Most famously, the Methodist Episcopal Church split over slavery in 1844. But when three denominations reunited in 1939, it came at the cost of pushing African Americans into the racially segregated Central Jurisdiction.

Retired Bishop Forrest C. Stith, who helped establish the African American Methodist Heritage Center, gave a thorough overview of this history. Stith said proposals to abolish the Central Jurisdiction and integrate the church came up at every General Conference after the “demonic decision” in 1939 to treat Black people as sacrificial lambs of unity until the 1964 General Conference that began to see the jurisdiction’s unwinding.

“I personally had been the lone Black clergy in the old Baltimore conference as they struggled with their relationship with the adjacent Central Jurisdiction conference, the Washington Conference,” Stith said. “I witnessed on the floor, the debates and a struggle to move towards unity. The two conferences not only worked together, but in ’65, they merged.”

Stith said leaders formed Black Methodists for Church Renewal in 1968 not just to be a caucus group within the newly created United Methodist Church but also to renew the denomination and answer the question: “Why did we stay?”

In her presidential address, Harvey spoke of why people stay in The United Methodist Church now and where she sees God at work in the denomination. She pointed to the work United Methodists have done to feed the hungry, address racism, work for climate justice, welcome immigrants and help disaster survivors rebuild.

“While some have worked to divide our church, there are those who have done more to unite the church in its work for justice and full inclusion than ever before with grit, determination and the guidance of the Holy Spirit,” she said.

“The persons sitting in our pews continue to be the body of Christ in more significant ways than has ever been experienced. Let us not think so highly of ourselves to think that we can thwart the work of the Holy Spirit.”

United Methodist centrists and progressives have made common cause in working for the inclusion of LGBTQ people in church life, but a veteran General Conference delegate thinks the coalition could be short-lived.
Social Concerns