The Methodist movement was just beginning, and John Wesley already faced pressure from all sides. Why didn’t he break with the Church of England and start his own denomination?

On one side, he had Methodist lay preachers who wanted to administer the sacraments but could not do so within the strictures of the Church of England. On the other, he had fellow priests unhappy with what they saw as new competition and sniping at him for violating church rules.

However, Wesley stressed that he intended to remain in the church of his birth and wanted Methodists to do likewise. In 1758, he even included his “Reasons Against a Separation from the Church of England” as part of a collection of Charles Wesley hymns.

His message was clear: Any split would damage the Methodists’ witness and thwart their divine calling to renew the Church of England.

“We look upon ourselves, not as the authors, or ringleaders of a particular sect or party … but as messengers of God, to those who are Christians in name, but heathens in heart and in life,” he wrote.

As Wesley saw it, the local Methodist chapel was great for preaching and Christian formation, but to participate in Holy Communion, the people called Methodist needed to head to their nearest Anglican church.

Nevertheless, Wesley would go on to help establish a separate Methodist Episcopal Church in the newly separate nation of the United States.

He died in 1791 thinking himself a good son of the Church of England, but a new denomination already was claiming him as father.

As United Methodists today discuss how to stay united despite their own pressures, many are looking to Wesley’s model for guidance. However, Wesleyan scholars warn that people cannot fully understand Wesley outside his 18th century context.

When it comes to Wesley and church unity, the example he set is complicated.

Working toward mutual Christian understanding and unity is the main job for The United Methodist Church’s ecumenical arm.

The Rev. Jean Hawxhurst, an ecumenical staff officer for the Council of Bishops, says staying together is crucial to the denomination’s witness.

“The United Methodist Church has a powerful opportunity to witness to the world that the love of Jesus Christ is stronger than the disagreements that threaten to divide us,” she said. “Clearly, we are called to let all our relationships be governed by Christ-like love. Staying together is the only witness that lives up to that high calling.  Schism does not live up to that calling.”

At present, The United Methodist Church is in talks with the Episcopal Church — the sister church of John Wesley's beloved Church of England — about a possible full communion agreement in the future.

Hawxhurst believes one thing United Methodists should examine is what they mean by unity.

“Do we mean uniformity; do we mean like-behavior or like-action? Do we mean what has been referred to as ‘organic’ or structural/institutional unity?” she asked. “Or, do we maybe mean something different, like spiritual unity or unity based on what happens in our souls when we respond to Jesus' prayer in John 17?”

Engaging these questions, she said, might give the denomination hope of moving forward together.

Wesley had a deep attachment to the church that provided his father’s living as a parish priest and the foundation of his  and brother Charles' own spiritual development and ministry. However, he also had very practical reasons for wanting Methodism to remain within its fold, say Wesleyan scholars.

The Rev. Jason Vickers, United Methodist elder and past president of the Wesleyan Theological Society, pointed out that the Church of England as the established state church held a position alien to most Americans.

“The way I make this point to my students in seminary is to say that 18th century England has more in common with, say, 21st century Turkey than the 21st century United States,” said Vickers. He is professor of theology and site coordinator of the Asbury Theological Seminary’s Memphis campus.

Legally, in Wesley’s Britain you could be part of another church just as in today’s Turkey you can be something other than Sunni Muslim. But you needed to be prepared for second-class status. The church’s power came with teeth.

Under the Toleration Act of 1689, dissenting Protestants like Baptists and Congregationalists could not run for political office, serve in the military or attend Oxford or Cambridge. A 1711 law imposed fines on anyone who, after partaking Anglican Eucharist, was found worshipping in a dissenting tradition’s meetinghouse.

If anything, Catholics occupied an even more tenuous position in 1700s British society (just ask the Irish).

“A schism with the Church of England would have had dire consequences both financially and socially for the Methodists,” said Morris L. Davis, a professor of Christian history and Wesleyan Methodist studies at United Methodist Drew University Theological School.

Theological reasons to stay or go

In his 1786 sermon “On Schism,” Wesley spoke of church splits in blunt terms.

“It is evil in itself,” he preached. “To separate ourselves from a body of living Christian, with whom we were before united, is a grievous breach of the law of love. … It is only when our love grows cold, that we can think of separating from our brethren.”

However, in the same sermon, he also argues for when a church separation is not only acceptable but demanded by conscience.

In that case, he said, the sin of separation would not be on the person who leaves but upon those who necessitated the departure.

He definitely had no interest in seeing the Church of England return to the Roman Catholic fold. 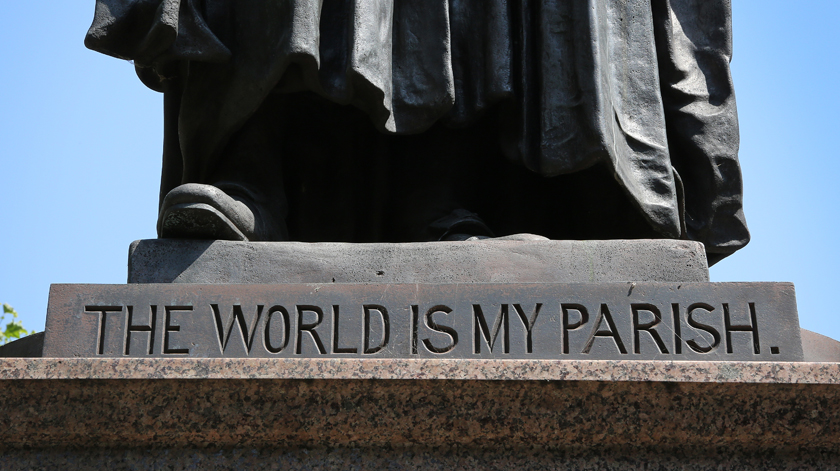 "The World is My Parish" is inscribed at the base of a statue of John Wesley located in the courtyard outside Wesley's Chapel and John Wesley's house at 49 City Road in London. Photo by Kathleen Barry, United Methodist Communications

Wesley, in his writings, continued to oppose a general separation from the Church of England throughout his life.

Nevertheless, by 1784, he had established a U.S. denomination that eventually would become the multinational United Methodist Church.

In the wake of the American Revolution, the Church of England had basically ceased to function in a nation that was no longer part of England. The Episcopal Church would not be established until 1789.

In the interim, Wesley did not wait for permission. He ordained clergy and sent Thomas Coke as superintendent, even though he himself was no fan of the U.S. fight for independence.

“It was a very deliberate move to separate from the Church of England,” said the Rev. Ted Campbell, a United Methodist elder and church history professor at Southern Methodist University’s Perkins School of Theology.

“John Wesley did some very specific things that I think if any United Methodist clergyperson did, he would be out immediately or very soon,” Campbell said. “If any elder in The United Methodist Church ordained other clergy, we would not allow that.”

Campbell cautions against leaning too heavily on John Wesley’s example in discussing the unity of today’s United Methodist Church.

Campbell said he personally thinks United Methodists should look at what’s fundamental that binds the current church. In Campbell’s case, he sees those fundamentals as the denomination’s Articles of Religion, the Confession of Faith and the General Rules.

Ryan Danker, a Methodist studies professor at United Methodist Wesley Theological Seminary in Washington, stressed that for Wesley, the doctrines of salvation were key.

“I think if we are going to find a way forward with Wesley then we have to focus as he did on the core doctrines of salvation and holiness,” he said. “If we find agreement there, then we will continue to be in a Wesleyan way.”