Sierra Leone Area Bishop John K. Yambasu was remembered as a bridge builder, for his critical leadership on ending conflict in The United Methodist Church, and for “being the voice of Jesus when it needed to be heard.”

Yambasu, who died at age 63 in an Aug. 16 car accident, was remembered by his fellow bishops and other United Methodists during a Service of Remembrance and Rites of Passage on Sept. 6 at King Memorial United Methodist Church and a prayer vigil on Sept. 5. Memorials were held throughout Sierra Leone and in other countries in Africa over the past week.

In a video eulogy played during the funeral service, the president of the United Methodist Council of Bishops said that Yambasu’s funeral sermon was preached “by the way he lived out his everyday life.

Harvey, who also leads the Louisiana Conference, praised Yambasu’s leadership in bringing together United Methodists of different theological beliefs and engaging them in a conversation with the aim of reaching resolution on divisions over LGBTQ inclusion.

The meetings he arranged of theological centrists, traditionalists and progressives resulted in the Protocol of Reconciliation and Grace Through Separation, a proposal to General Conference to allow an amicable separation of the church.

Yambasu’s funeral attracted people from all walks of life — academics, politicians, Muslims and varying denominations of the Christian community.

His widow, Millicent Yambasu, spoke of her late husband as a loving, caring husband and father who was “a real gift to humanity.”

“He was a dreamer and a visionary who touched so many lives here in the conference, in Sierra Leone and the world at large,” she said during a service on Sept. 4.

East Africa Area Bishop Daniel Wandabula said he agreed with those who said Yambasu was “irreplaceable.”

“We should not despair. Our struggle should be to keep his legacy alive and to grow from his example. Our hope should be with the thousands of leaders, especially the young people that Bishop John Yambasu has trained, mentored, groomed and empowered over the years. It is our responsibility to take up the baton and run with it to the finish line,” Wandabula said.

While Yambasu was born and raised in Sierra Leone, Wandabula said that like John Wesley, Methodism’s founder, “the world was his parish as he brought voice to global issues that impacted his denomination, The United Methodist Church.”

Côte d’Ivoire Area Bishop Benjamin Boni recalled the first time he met Yambasu in Côte d’Ivoire, when Yambasu was a missionary serving the young people of sub-Saharan Africa. He said God used Yambasu in diverse ways — from youth service, administration, evangelism, mission, reconciliation and unity to the social life of the people of God and the entire society.

“In a nutshell, God powerfully used him,” Boni said. 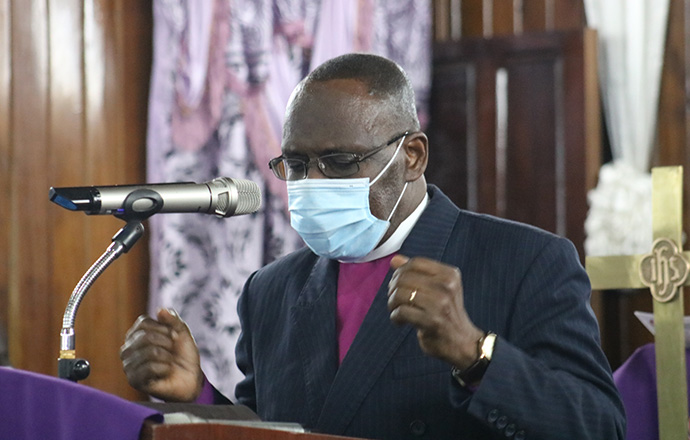 There was a standing ovation when Boni asked the congregation to clap in memory of the great works that Yambasu did. Elected bishop in 2008, Yambasu took on roles that made him a leader for his country as well as the church.

He provided critical leadership during the deadly 2014-2016 Ebola outbreak that killed more than 11,000 people in Sierra Leone, Liberia and Guinea, and the 2017 landslide that killed hundreds after torrential rains and flooding in Freetown.

In another video played at the service, West Ohio Area Bishop Gregory Palmer said that where Yambasu stood on a particular matter never “put him in opposition to you as a fellow Christian, as a fellow human being.”

He said the Sierra Leone bishop was a natural bridge builder in a “world of brokenness and pain.”

Hundreds joined the procession through the streets of Freetown up to the hills where Yambasu was buried in the compound of the Bishop Wenner School of Theology of the United Methodist University. The school was a dream he was working on at the time of his death.

At the graveside, the Rev. Julius Nelson, a friend of Yambasu’s from Liberia, spoke of the bishop as a faithful patriot and nationalist.

“He loved his brethren with whom he labored. He loved and stood with his people, in all of our church life and missionary endeavor…. He was a shining star of the African continent,” Nelson said.