As the death toll continues to rise, United Methodist Bishop John Yambasu helped organize a service of remembrance that allowed survivors to mourn the dead.

The scale of the disaster meant many families could not have funeral service before a mass burial of some 300 victims because the bodies were already decomposing.

Earlier reports had put the death toll at about 500, with hundreds more missing, but clergy at the Aug. 27 service said as many as 1,000 died in the mudslide and flooding two weeks ago. More than 3,000 are homeless after the torrential rains that caused the disaster.

Yambasu, who is president of the Council of Churches of Sierra Leone, said the council organized the Remembrance and Thanksgiving Service for Landslide Victims and Survivors to allow survivors to observe a funeral service for their loved ones. The service was held close to the spot where the landslide occurred. 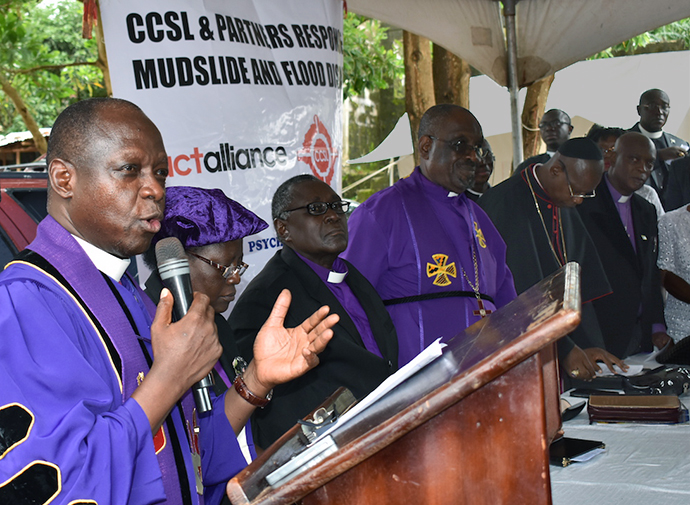 Bishop John Yambasu gives the benediction at the end of a remembrance and thanksgiving service for the victims and survivors of a devastating landslide at the bottom of Mount Sugar Loaf, Sierra Leone, on Aug. 27. United Methodists — including entire families — are among the hundreds killed after torrential rains caused deadly mudslides and flooding near Freetown. Photo by Phileas Jusu. UMNS.

“We have decided to observe this service of remembrance and thanksgiving at the very scene of the disaster while the loss, pain and grief is still fresh in our hearts and to mourn the loss of our loved ones whom we hope to see again in heaven,” Yambasu said.

He said the service also allowed a chance to give thanks to God for the thousands who survived and to ask for God’s divine forgiveness and mercy upon Sierra Leone.

The bishop recalled that during the last two decades, Sierra Leone has suffered through a civil war and the deadly Ebola outbreak, even before the most recent disaster.

He said the gathering was to plead for God’s mercy and to ask Him to protect the nation and to avert any other unforeseen calamity in the future.

In addition, Yambasu expressed thanks and appreciation to the Sierra Leone government, national and international NGOs and friendly nations who stood by the country and continue to provide services. 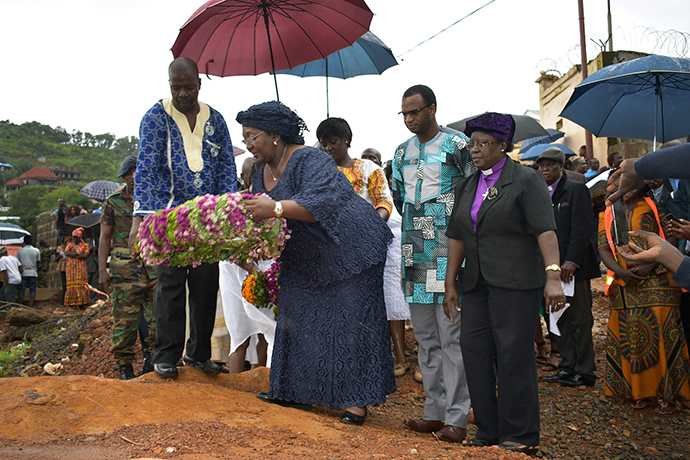 Sierra Leone’s First Lady, Sia Nyama Koroma, lays the first wreath at the site of the landslide after a worship service held in memory of those who died in the landslide and flooding two weeks ago. Many of the bodies were never recovered. Photo by Phileas Jusu, UMNS.

The service recognized the gallantry of the several volunteer rescue teams, especially the youth who placed their lives on the line to rescue people and recover the dead from the rubble of destruction, the bishop said.

“I want to call the attention of our brothers and sisters who are the survivors of the disaster that we are here to worship with you and give you hope and to let you know that all is not lost,” said the Rev. Christiana Sutton Koroma, an executive with the Council of Churches, an ecumenical organization.

“For as long as there is life there is hope and that God is with us. We are troubled but not destroyed. God will see us through in Jesus name!” she assured family members at the service.

The general secretary of the council, Mrs. Ebun James Dekam, said Sierra Leoneans must pledge to be committed to caring for the environment. She called on local authorities to be vigilant in protecting the environment.

The Rev. John Nat Tucker of the St Paul’s Catholic Church in Regent said the loss was incalculable and the extent of the tragedy immeasurable.

A condolence letter from the top executive of the World Council of Churches, the Rev. Olav Fykse Tveit, was read.

Bishop Arnold Temple, a retired bishop of the British Methodist Church, called for an investigation into the cause of the landslide and said God was not to blame for the disaster.

Koroma recalled that the country had been through calamities, insurgencies and Ebola but said the landslide was devastating and unprecedented.

“Words alone cannot express how we feel today. Some people say it is horrifying; some say it is a nightmare. But as a nation, we must continue to hold onto God,” she said.