United Methodist Bishop Scott Jones was removed from the Southern Methodist University trustee board last month, another episode in an ongoing legal battle for control of the Dallas school.

Jones, an SMU alumnus and former professor at SMU’s Perkins School of Theology, had served on the board since his election as bishop in 2004.

Fellow trustees removed him April 19, soon after he petitioned a Texas court to join a lawsuit filed against SMU by the South Central Jurisdictional Conference of The United Methodist Church.

Jones, who oversees the denomination’s Texas Conference, described his removal from the board as illegal and “vindictive” in an April 20 court filing.

SMU in its own filing earlier this month said Jones was removed because he breached his fiduciary responsibility as a board member by suing the school.

In response to questions from United Methodist News, SMU released a short statement that did not address Jones’ removal.

“We value our continuing relationship with the Methodist Church and the service of its members and leaders on the SMU Board of Trustees, including Bishop (Michael) McKee who was recently elected to another four-year term as a trustee,” the May 27 statement says.

Jones cast a dissenting vote last November when trustees decided to change SMU’s articles of incorporation, deleting references to the conference’s authority to approve trustee nominations and school land sales and leases. One deleted passage declares SMU to be “forever owned, maintained and controlled” by the conference.

SMU President R. Gerald Turner released a statement on Dec. 6 saying the change in governing documents was necessary “to make it clear that SMU is solely maintained and controlled by its board as the ultimate authority for the University.” He described the board’s action as complying with Texas law.

The board changed its bylaws to be consistent with the new articles of incorporation. 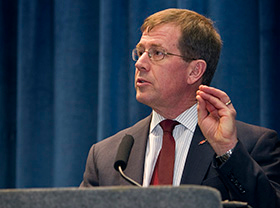 Turner said SMU intended to maintain ties with The United Methodist Church, including through Perkins.

But he stressed to the Dallas Morning News that SMU had a commitment to non-discrimination, and that the 2019 General Conference of The United Methodist Church’s approval of the Traditional Plan — reinforcing bans against LGBTQ ordination and same sex weddings — conflicted with SMU’s values. He also noted that the prospect of a split of The United Methodist Church created uncertainty for SMU.

On Dec. 4, the South Central Jurisdictional Conference filed suit in state district court in Dallas. The lawsuit argued that the 1996 articles of incorporation SMU’s board sought to change guaranteed the conference ultimate control of the school and couldn’t be altered without the conference’s approval.

SMU’s court filings in response contend that the Texas Business Organizations Code leaves decisions about the articles of incorporation with the trustees. SMU also holds that the conference had, by approving nominations for the trustee board, given the board “prior authorization” to change the governing documents.

Jurisdictional conferences were to be held this summer, but have been pushed back to Nov. 10-12, 2021 because of the COVID-19 pandemic.

Between quadrennial meetings, a Mission Council handles administrative business for the South Central Jurisdiction. It was the council that chose to go to court.

“We were not opposed to (SMU’s board) making some changes. It’s a changing world,” Missouri Conference Bishop Bob Farr, a Mission Council member, said by phone. “But there is a fundamental disagreement as to whether SMU has to ask for permission to get those changes.”

Jones, in a phone interview, shared why he hired a lawyer and petitioned to join the suit.

“I took this step at the request of the attorneys for the jurisdiction as a way of cooperating with their efforts,” he said. “This dispute is ongoing and my participation is part of an attempt to resolve this in favor of the jurisdiction’s claims.”

Jones filed his petition to join the suit on April 16. Three days later, he filed an amended petition. It included a copy of an April 19 note sent to him by Robert H. Dedman Jr., SMU trustee board chair, informing him he had been by removed as a trustee “for cause.”

Jones’ amended petition asks that the board’s decision to remove him be declared void.

SMU’s filing in response argues that he violated his fiduciary duty as a trustee by going to court, but also describes the question of his trustee board membership as moot. The filing says his latest term has now expired and he is term limited from another unless granted a waiver.

“There’s some unclarity about when my term was to come to an end,” Jones said in the phone interview.

The 1996 Articles of Incorporation say SMU’s board must include three bishops of the South Central Jurisdiction, as well as nine other people recommended by the jurisdiction’s College of Bishops.

The new articles of incorporation delete those requirements. And SMU’s board has recently changed beyond Jones’ removal.

A May 18 press release notes that Bishop Cynthia Fierro Harvey, who leads the Louisiana Conference and is president of the Council of Bishops, had completed her term as an SMU trustee.

The same release names six new board members, none a United Methodist bishop.

That leaves North Texas Conference Bishop Michael McKee as the sole United Methodist bishop on the 42-member board.

“The new bylaws call for one bishop to serve on the board and it makes perfect sense for that bishop to be Bishop McKee at this time,” Harvey said by email.

She also said that bishops and pastors on the board were excused from voting on whether to remove Jones.

Judge Maricela Moore of Texas’ 162nd Civil District Court is presiding in the lawsuit, the record of which has grown to hundreds of pages, in multiple filings by both the conference and SMU.

In a May 6 order, she dismissed some claims made by the conference, but others she did not. SMU’s May 27 statement said Moore’s rulings so far “make it clear that the board has the ultimate authority” over SMU.

“We look forward to the remaining claims being resolved and dismissed as well,” SMU’s statement said.

Farr said that “rulings dismissing certain claims were in error and we will be filing an appeal,” and noted that the conference’s pending claims include that it has a “beneficial interest in all of SMU’s assets.”

The lawsuit’s filings are available online, under the parties’ names and under the case number, DC-19-19359.

After a mass shooting claimed seven lives and injured dozens of others at a Fourth of July parade in Highland Park, Ill., Bishop John Hopkins is urging United Methodists to act. “This mass shooting calls us to mourn, pray ... and strengthen our resolve to find ways to address the growing epidemic of gun violence."
Faith Stories

Mourning the loss of his father and brother, Damon Neal is finding healing in a mural he is painting at Dallas Indian United Methodist Church he calls “Window to Heaven.” Neal, a Native American, believes God is taking “every negative thought I had and ... putting it into a positive."
General Agencies