Organizers have announced that the next General Conference will be Aug. 29-Sept. 7, 2021, in Minneapolis, despite pleas that the decision-making body not meet at the start of the academic year.

However, the organizers are still looking for ways to ensure delegates, even if they can’t meet in person, can participate online in what many expect to be a historic legislative meeting.

The United Methodist Church’s top legislative assembly — postponed from this May by the COVID-19 pandemic — faces multiple proposals to resolve longtime debate around LGBTQ inclusion by splitting the denomination along theological lines.

The postponed General Conference will remain at the Minneapolis Convention Center as originally planned. The Commission on the General Conference authorized Sara Hotchkiss, business manager, to pursue new dates with the venue after it canceled events into this May because of the virus.

“The hospitality industry has been devastated by COVID-19 with staffing levels significantly reduced, so negotiating amid the pandemic was a much slower process,” Hotchkiss said in a statement.

“I am grateful for our partnerships in the industry we have built over the years that assisted us in getting our foot in the door early enough to find any dates in 2021,” she said.

However, the commission expressed regret in its statement about not being able to accommodate a request from young adult delegates to select different dates. The new schedule is similar to proposed dates first disclosed in an email to church leaders from the Council of Bishops. 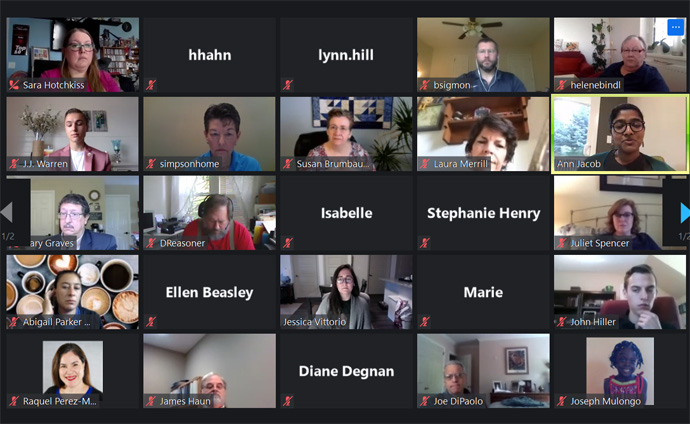 The General Conference Commission met online May 16 with Ann Jacob, Jessica Vittorio and J.J. Warren — three young adult delegates who wrote and circulated a petition to change those proposed dates after they became public.

The commission then met for more than three hours in closed session, but when the meeting reopened, the group did not report any decisions and declined to take questions.

The Book of Discipline, the denomination’s policy book, lists a few exceptions to its open meetings rules, including negotiations. However, the book’s Paragraph 722 also says: “A report on the results of a closed session shall be made immediately upon its conclusion or as soon thereafter as is practicable.” The commission did not make public its decision until more than a week after its closed meeting.

The young adults told the commission that the late summer schedule could disenfranchise the record number of young delegates elected to what could be a landmark General Conference.

“Our concern really relates to an injustice,” Vittorio, a North Texas Conference delegate, told the commission.

What about bishop elections?

The seven central conferences — church regions in Africa, Europe and the Philippines — also are rescheduling their meetings and bishop elections. The Book of Discipline, the denomination's policy book, requires the gatherings be held within a year of General Conference.

The bishops announced at their spring meeting that they would work with episcopacy committees in each jurisdiction and central conference to fill any vacancies left by bishops who retire before elections are scheduled. The Council of Bishops has final approval on any interim bishops.

General Conference, the only body authorized to speak for the church, typically meets in late April or early May — the end of the academic year. However, Vittorio said the current proposed dates present challenges to students, teachers, professors and parents, who cannot take off the first two weeks of the school calendar.

The Council of Bishops, at its meeting May 1, approved a motion strongly encouraging the commission to consider the young adults’ petition. The document drew more than 2,000 signatures from United Methodists in some 80 annual conferences around the world.

“We asked United Methodists whether the inclusion of young people in the decision-making body of our church mattered, and they said, ‘yes,’” Ann Jacob, a delegate from the Eastern Pennsylvania Conference, told the commission.

She and the other delegates in a letter urged the commission to select alternative dates or provide alternative methods to allow full participation, including virtual voting.

For the coming assembly, annual conferences elected about 120 General Conference and reserve delegates who are age 35 or younger. That represents about 11% of the international lawmaking body and a substantial increase over the number of young people usually elected.

“Including young adults in the General Conference is always an important consideration. We affirm that their voices need to be heard,” Kim Simpson, the commission’s chair, said in a statement.

“Unfortunately, this request did not come to the commission until late in the process. By that time, the available dates were secured and any attempt to change the dates would endanger the carrying forward of the deposits to the newly agreed upon dates. This is at least a half-million dollars.”

Hotchkiss said it was a challenge to accommodate a 10-day meeting.

Planning the assembly comes with multiple moving parts that must align. These include securing visas, hotel space, transportation, interpreters and a large-enough venue for a gathering set to draw 862 delegates and 66 bishops from four continents as well as potentially thousands of others.

United Methodists in the Minnesota and Dakotas conferences have been planning to host the gathering in Minneapolis since November 2013. The cost for hosts of General Conference “often is no less than six figures,” Hotchkiss told the bishops earlier this month.

But all planning has been made more complicated by the global pandemic, which has caused postponements and disrupted economies worldwide.

As of May 26, Johns Hopkins University reported that the coronavirus had killed more than 348,000 worldwide. In the U.S., more than 100,000 people have died from COVID-19, and nearly 40 million have filed for unemployment since the crisis began. Cases are still on the rise in Minnesota.

The group will present its recommendations to the commission for consideration.

Vittorio, one of the young adult delegates, said the process has helped her become more aware of the strong support for young people across the denomination. She also was grateful to be able to present the delegates’ concerns.

“That being said, I am deeply troubled by the statement in the announcement that places the burden for action on the young people and implies that we spoke up too late in the process for our requests to be viable,” she said.

Her group launched its campaign to change the dates on April 22, the day after the tentative dates went public.

“Throughout this process we experienced a significant amount of secrecy and ‘confidentiality’ which served as an ever-present roadblock to our attempts at aiding in solutions to these concerns.”

The United Methodist lawmaking assembly is not the only major Christian gathering upended by the pandemic.

Organizers of the world-renowned Passion Play in Oberammergau, Germany — held since the 17th century in gratitude to God for deliverance from the plague — have delayed this year’s performances to 2022.

The Southern Baptist Convention canceled its annual meeting for the first time in 75 years. Archbishop of Canterbury Justin Welby also delayed Lambeth Conference to 2021. The typically once-a-decade event in Canterbury, England, brings together bishops from the multiple countries of the Anglican Communion.

Three United Methodist annual conferences, including one in Africa, have asked the denomination’s highest court to rule on the ramifications of General Conference’s third postponement since the onset of COVID. The Judicial Council also faces more questions about church disaffiliations.
Evangelism