It begins with a weeklong intensive spiritual formation, learning and reflective time in person at a retreat center, followed by three months of weekly online classes.

The program provides practical training and continuing education from ministerial experts — gained from experience and not from a seminar — to enhance pastoral abilities and capabilities to serve their churches in a cross-cultural appointment.

The classes are practical and apply to subjects such as funerals and weddings, online service, self-care, hospital visitation, preaching in English and improving English accents, small-group ministry and retirement plans. They are led in English because the participants’ churches are English-speaking.

There are 15 graduates of CRCC Madang per year and 60 graduates total. The graduates make up about 24.7 % of the 243 Korean full-time pastors serving a cross-racial appointment as of 2020.

The Rev. Grace Pak devised the program. While she was president of the National Association of Korean-American UM Pastors Serving Cross-Racial/Cultural Appointment (NAKAUMPSCA), Pak was passionate in her efforts to support that community, in order to help them be effective and faithful pastors and to build up the body of Christ. 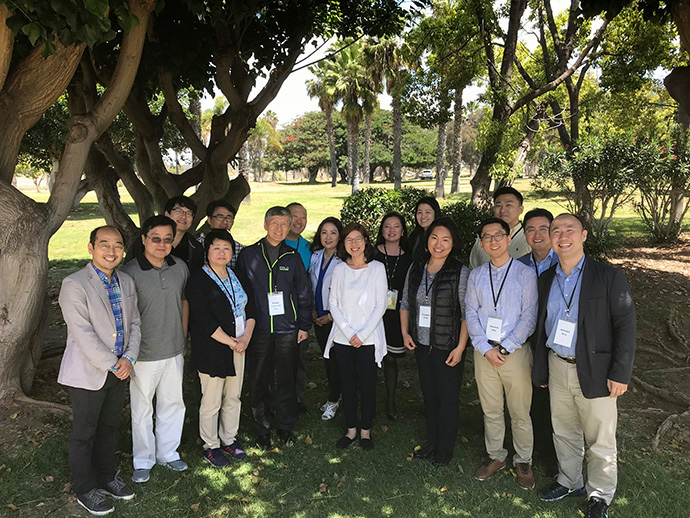 Participants in the first CRCC Madang program, held in San Diego in 2018, gather for a group photo. The program begins with a week of intensive spiritual formation, learning and reflection time. File photo courtesy of CRCC Madang.

“There were no learning opportunities, which was needed in the CRCC community even though there were plenty of experts who had gifts and talents in ministry.” Pak said.

She called a meeting in October 2015 between her organization and the United Methodist Korean Clergywomen Association, where the program was designed. The first classes began in 2017.

Pak had a vision that CRCC Madang would build a community and opportunity to provide practical pastoral education to 15 pastors a year and 150 in 10 years to become transformative leaders in the denomination and beyond.

One of the program’s first graduates, the Rev. Heewon Kim, now serves three churches in the Northern Illinois Conference. He shared his experience.

“It was full of meaningful learning, with diverse subjects from various experts,” he said. “We were all beginners in ministry, and eager to learn and hear the experiences and ‘know-hows’ of ministry from our seniors. I loved their honest and candid sharing.”

The most significant lesson he gained from the program was from the Rev. HiRho Park, who was then on staff of the United Methodist Board of Higher Education and Ministry.

Kim recalls her saying that there could be an appointment that seems unfair, but the keys to overcoming an unfair appointment are “to equip yourself with your pastoral skills and abilities rather than complaining about it.”

“Her advice became a strong and realistic challenge for me,” he said.

One of the most recent graduates of CRCC Madang is the Rev. Miso Park, who is serving Bergen Highlands United Methodist Church in the Greater New Jersey Conference.

“Most of my classmates have served a church between three to eight years in isolated rural areas, so there were not enough opportunities to meet and learn from experienced pastors,” Park said. “However, the faculty members who were experienced and experts in cross-racial ministry were from all over the country, shared their experiences, and taught us very practical matters of ministry.”

The registration deadline for CRCC Madang is April 30. Any Korean-American pastor who has been appointed to cross-racial/cross-cultural ministry more than three years and less than eight years can apply.

The registration fee is $500 per person. The CRCC Madang board will give scholarships to pastors who need financial help. Board members donate $100/month up to a maximum of $300 in scholarship funds. Some pastors receive financial help from their district superintendent’s office or they use their continuing education funds.

Because her class was held during the pandemic, Park had a chance to learn much more about how practical CRCC Madang was, especially for those beginning their ministry, and she appreciated it. She recommends fellow Korean clergy to attend.

“During the pandemic, the pastor who taught us the online worship service attended my church service and gave me feedback and advice, which was very helpful,” she said. “Also, I learned there how to provide pastoral care to my parish and how to care for myself during these difficult times.”

Even though it has been a very successful and significant program for the Korean pastors serving cross-racial/cultural appointments, they had to deal with financial issues.

The Rev. Sungho Lee, a board member and the program’s acting executive director, said that the goal at the very beginning was to build up sustainable financial resources to operate independently, even though they received some help and support from the Korean Ministry Plan and Board of Higher Education and Ministry.

To save operating expenses, organizers designed virtual classes even before the pandemic began, except for the last week for a weeklong retreat. They registered as a nonprofit organization and organized the board to support CRCC Madang, and now, Lee said, they raise funds to operate it independently.

According to Lee, effectively serving in a cross-racial/cultural appointment is to answer God’s calling.

“God called us to bring new spiritual wind to The United Methodist Church and America,” Lee said. “CRCC Madang helps pastors work hard and diligently in their pastoral settings. It is a place to learn the ministry that we did not learn from their seminaries that we need. It is a place of training practically and solidly to enhance their pastoral skills and abilities for Korean pastors who have been appointed to a cross-racial church.”

CRCC Madang focuses not only on practical training and education but also on a new movement in the denomination, according to retired Bishop Young Jin Cho. Cho is the chair of CRCC Madang’s board and a teacher for its church renewal class.

“The UMC is in desperate need of renewal. Renewal and revitalization come when pastoral leadership is transformed,” he said. “We have to build American churches on a spiritual foundation, not just on skills.”

To combat the decline of United Methodist churches in the U.S., Cho said the solution is not to have a “new smart program or initiative,” but rather, a different approach that emphasizes clergy renewal and renewal of spiritual foundation.

“It is not just for pastors, but a change that must come to the whole church, one at a time,” he said. “Eventually, we want this to become a movement to renew the denomination as a whole.”

Kim is director of Korean and Asian news at United Methodist Communications. Contact him at 615-742-5470 or [email protected]. To read more United Methodist news, subscribe to the free Daily or Friday Digests.

“If you live life long enough, you have a moment when it all literally falls down,” writes the Rev. Dr. Tori Butler. She shares the time this happened to her and how she got back up.
Church Leadership

Hundreds gather in Dallas and online for “Space at the Table: Conversations of Hope for the UMC Future,” an event prompted by the pandemic and local church disaffiliations.