Some young United Methodists warn that the Traditional Plan — adopted Feb. 26 during the denomination’s special General Conference — is the choice of older congregants who are not the future of the church.

Others, like Monique Assi, a church member in Côte d'Ivoire, praised the plan as being biblically correct.

“This plan is in perfect harmony with the word of God,” said Assi, 32, a lifelong United Methodist who is communication director for her local church in West Africa. “For me, it is proof that The United Methodist Church remains attached to the values and principles advocated by the Bible.”

The plan retains a ban on gay marriage and forbids “self-avowed practicing homosexuals” from being ordained in The United Methodist Church. It also adds more accountability and penalties for those who defy the bans. The One Church Plan, which would have allowed such decisions to be made locally, was defeated.

The Judicial Council, the denomination’s top court, will address questions about the constitutionality of parts of the Traditional Plan when it meets April 23-26 in Evanston, Illinois.

The notion that the Traditional Plan is meant to be hurtful toward LGBTQ people is incorrect, Assi said.

“This decision is not the hatred we express to the LGBTQ, not at all,” she said. “This decision is rather the expression of our fidelity to the word of God. … The Bible is quite clear and explicit about homosexuality, that it should not be practiced in the church.”

Other young United Methodists took the passage of the Traditional Plan hard.

During the Feb. 23-26 special General Conference, 15,529 young people signed a statement asking for passage of the One Church Plan and for more young delegates to be selected in the future.

“I think the hardest part is that we were not represented, and to know that my voice was completely overlooked,” said the Rev. Chrisie Reeves-Pendergrass, 31, an elder at Gilbert United Methodist Church in Gilbert, South Carolina.

“There was such a vast overrepresentation of (delegates that are retired or nearing retirement), and the fallout of this will have to be led through the local congregation by everyone else. It’s really easy when you don’t have to deal with the consequences … on the ground in the everyday.”

Shayla Jordan, a lay delegate from Great Plains, echoed that sentiment while speaking during General Conference.

“People speaking here don’t represent the church that will be for years down the road,” Jordan said.

Young LGBTQ people, especially those headed toward ministry careers in The United Methodist Church, are alarmed, some students said.

“It’s a time of grieving right now,” said Kailie Hamilton, 19, who is studying social work and political science at the University of Kansas. “That our church that we have grown up in and loved did this to us; to us as queer people, to us as young people, to us as a generation, to us as a world, to every marginalized community out there.”

Hamilton hasn’t decided whether to pursue a career in the church, but it is still an option she is considering.

Chelsea Shrack, 31, campus minister at the Wesley Foundation at Kansas State University, said she feels sad for her LGBTQ friends.

“I am a recent graduate of seminary and so many of my peers identify as LGBTQ and have so many gifts to offer our conference and our world, and they won’t have that chance,” she said.

“Our church will be so much worse off for that.” 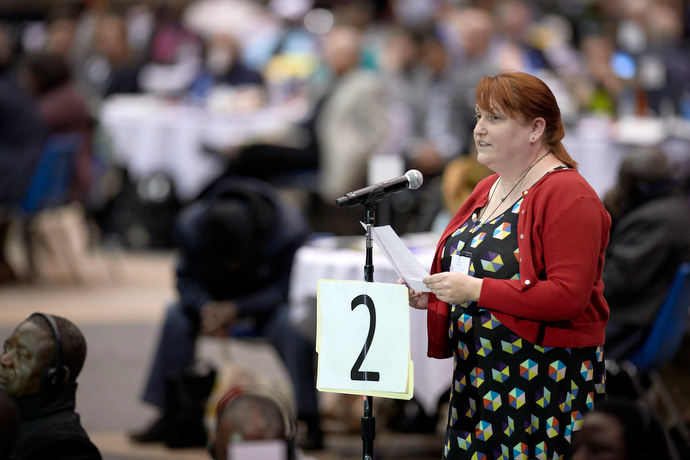 Aislinn Deviney, a delegate from the Rio Texas Conference, speaks during the debate on a vote to strengthen denominational policies about homosexuality. Deviney, who described herself as a young evangelical, said many young people “fiercely believe marriage is between one man and one woman.” Photo by Paul Jeffrey, UMNS
Michael McDowell, 21, a junior at Rice University who is planning a career in United Methodist ministry, said he had mixed feelings about the passage of the Traditional Plan.

But McDowell said he worries about what happens next.

“Where I certainly feel mixed about this is the fact that this pretty much means that the church is going to split.”

He is also concerned about his LGBTQ friends who feel targeted by the denomination.

“Really it’s a question of how we read the Bible and not a question of, ‘Do we love you or do we not love you?’”

Kent A. Manzo, 22, a district youth president in the Mindanao Philippines Annual Conference, said he was “delighted” by passage of the Traditional Plan.

“This church has chosen to put premium on God's consistency and truth,” Manzo said. “Even though I belong to a generation where the majority of people embrace the non-conservative perception toward homosexuality, I still cling to the notion that the need to accommodate homosexuality due to societal pressures is not a substantial reason to bend our church's foundation and principles.”

CJ Lord, 22, who is set to begin seminary training at Emory University’s Candler School of Theology in the fall, said he is taking a wait-and-see approach.

“As of right now, I am going to wait for the Judicial Council’s ruling on the Traditionalist Plan,” he said. “I’m a faithful Wesleyan and The United Methodist Church is the most faithful that I can get to serving God in a tradition that upholds my theological convictions. However, getting it wrong at General Conference this year makes it a little bit harder.”

Lizette Che, 28, youth and young adult director of the Cameroon Mission Initiative of The United Methodist Church, is still praying for unity.

“Some are pleased and some are deeply hurt and disappointed,” Che said. “Some might be thinking they have defeated the other but to me, there is no win and there is no defeat. … My heart goes out for the brokenness experienced within the body of Christ. In times like this, togetherness is very important.”