The United Methodist Church’s Voice of Hope radio station will now be broadcast throughout eastern Côte d’Ivoire with the assignment of a new frequency in Abengourou.

The news was delivered by Bishop Benjamin Boni of the Côte d'Ivoire Episcopal Area on March 15, the final day of a jubilation marking the 10th anniversary of the radio station, which is based in Abidjan and called “La Voix de L’Espérance” in French.

“As of March 10, 2020, the High Authority of Communication and Audiovisual has decided to assign to the Côte d'Ivoire United Methodist Church the frequency number 91.5 in the city of Abengourou for the operation of its radio,” Boni read from an excerpt of a letter signed by René Bourgoin, the authority’s president.

The church applied for the frequency in 2015.

The satellite station in Abengourou will serve as a relay for Voice of Hope programs. It will bear the same name as the Abidjan station but will be able to contextualize part of its programming.

“We are in the process of finalizing certain aspects, including the content,” said Lydie Acquah, director of the radio station. “They will be able to retransmit the entire content from Abidjan during the half day. Then, we're going to desynchronize frequencies to allow them to retransmit their own content.”

Acquah said the station also is working on the recruitment and training of local staff and volunteers. The total cost of the project is $40,000.

“Extending the waves is important, but it is also costly,” Acquah said.

She said the station will begin fundraising from internal and external partners.

The new frequency means that the Voice of Hope is authorized to broadcast at the national level, covering a 150-kilometer radius around both Abengourou and Abidjan. The two cities are 207 kilometers (about 130 miles) apart. Abengourou is on the border between the predominantly Christian South, the Animist East and the Muslim North.

“Our vision is to accompany the church in this missionary district,” Acquah said. 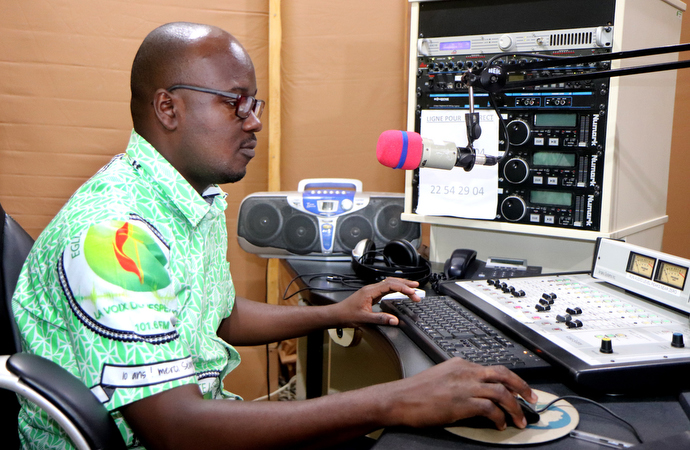 Vital Bongba provides live coverage of the closing worship service of the 10th anniversary celebration for the Voice of Hope from the station’s studio. Bongba is the producer of two radio programs, the webmaster and community manager of the station. Photo by Isaac Broune, UM News.

With a 2,000-watt transmitter, the radio station in Abidjan broadcasts 24 hours a day on FM 101.6 with a potential audience of 7 million people. With the new frequency, she said they expect to reach 2.5 to 3 million people around the Abengourou region.

Next week, Acquah said, the station will increase the power of its transmitter from two to four dipole antennas so that the entire eastern region will be covered by the waves of Voice of Hope.

The High Authority of Communication and Audiovisual has given the station nine months to implement the partial extension. If the satellite station succeeds, the group said it would grant another frequency in the political capital of Yamoussoukro in the center of the country, according to the letter.

During the jubilee celebration, the long-awaited announcement was met with song and dance from those gathered at Jubilee Cocody United Methodist Church, which is located next to the radio station in Abidjan.

“Our greatest ambition to be heard all over Côte d'Ivoire has just been heard,” Acquah said.

The Voice of Hope radio has not been silent since Bishop Boni addressed the audience on New Year’s morning in 2010.

“It is not easy for any radio station to broadcast without interruption, to consolidate social peace, to be a bearer of hope for our youth and marginalized children...,” Acquah said.

In a landscape dominated by several media, the prohibition of confessional radio stations from advertising and with very few resources to operate, she said she has seen the hand of God in its operation.

From October 2010 to April 2011, the worst moments of the post-electoral crisis in Côte d'Ivoire, the radio continued to broadcast messages of peace, restoration and hope.

“Our role takes on its magnitude in the most difficult moments,” Acquah said.

Boni, whose residence is adjacent to the radio station, supported her testimony.

“Our radio has done us a lot of good during the long weeks of the crisis,” Boni said.

Since its inception, the staff at the station has grown from five to 25. In addition to French and English, the radio offers a summary of teachings and news in 19 local and sub-regional languages.

Although confessional radio stations are not allowed to talk about politics, Acquah recognizes that the Voice of Hope has a duty to educate people in all aspects. It has organized programs with the U.S. Embassy on human responsibility during elections and with other faith-based media to bridge the social divide.

Amid the global COVID-19 crisis, the station is sharing government and conference best practices to help stop the spread of the virus. Programs, including sermons of hope, are being broadcast to pray for the situation and those suffering.

Since churches are closed, Voice of Hope has become a “virtual temple,” Acquah said.

“The experience of 10 years convinces us even more that in a society such as ours, the confessional media have an important part to play,” she said.

Although he could not be present for the anniversary celebration because of the coronavirus pandemic, Dan Krause, top executive for United Methodist Communications, donated $10,000 on behalf of the denomination’s communications agency to enable The United Methodist Church in Côte d'Ivoire to continue the important ministry.

“Your work shows how radio can be used as a powerful evangelistic tool to bring the Word of Christ to life among peoples,” he wrote.

Celebrating a trailblazer for women’s ministries

United Methodist Joyce D. Sohl “never misses an opportunity to remind church women how much power God has given us and of our call to use that power.”
General Church

Two Korean United Methodist clergy shared free hymns and special music that can be used during the Lenten season and on Easter Sunday.