The Jubilee United Methodist Church Choir, led by Serge Melloh, sings during the consecration of The Voice of Hope radio station in Abidjan, Côte d’Ivoire. UMNS photos by Tim Tanton.

United Methodists showed how to throw a party with the daylong celebration of a new radio station—a celebration so joyful and energetic that it could not be dampened by downpours outside.

“We are happy that God has inspired the church to build this radio station to serve the glory of his name,” Bishop Benjamin Boni declared, standing outside the station’s brightly polished wooden doors March 14.

What is the frequency, and what will be the name of the radio station as a symbol of the living God? Boni asked, reading from a prepared text.

The station’s name is The Voice of Hope, and its frequency is 101.6 FM, replied the Rev. Michel Lobo, administrative secretary of the United Methodist Côte d’Ivoire Conference. The name, he explained, came from the 2008 General Conference theme, “A Future With Hope.”

A four-hour worship service followed next door at Jubilee United Methodist Church, where nearly 1,000 people filled the sanctuary and overflowed into outside seating. The choir, a praise band and a brass ensemble created a mighty sound of soaring French hymns and music that poured out through the open windows and doors. Precious breezes blew back in, cooling those inside.

The choir, decked in maroon robes and mortarboards, waved white handkerchiefs in vigorous yet graceful movements as they sang, frequently dabbing the moisture that glistened on their faces.

Edouard Okoue, the project coordinator who led the development of the station, recognized the dignitaries and overseas guests and gave glory to Jesus Christ for the station. He thanked the church members who contributed “beyond what they had to do.”

He commended the station’s director, Lydie Acquah, who has led the development of the staff and programming for the past four months. “Mrs. Acquah, you have worked hard with your team,” Okoue said. “We put our confidence in you, and we want to surrender you to the Lord.”

Acquah embodied the spirit of the day, dancing to the music frequently. She urged people to give to the special collection for the station near the end of the service.

“The baby is born,” she said. “The baby needs shoes and garments.”

She ticked off specific needs—computers, cars, vans, supplies—and the people responded, dancing as they placed money in the offering baskets at the front of the sanctuary. A shout of acclamation rang out when a former prime minister, Pascal N’Guessan Affi, announced he was donating a car. Joel Ackah, an insurance executive and president of the conference board of investments, offered insurance for the building and car. The day before, his brother, Emmanuel Auguste Ackah, ambassador to Ghana and Côte d’Ivoire Conference lay leader, had brought a power generator for the station.

Throughout the service, speakers expressed gratitude for the partnerships that created the station, and representatives from the two United Methodist agencies along with government ministers offered words.

Hollon spoke on behalf of his agency and for Bishop Huie—flight problems prevented the Texas delegates from arriving in time. He reminded the congregation of the Apostle Paul’s instructions to the Philippians, to “provide people with a glimpse of good living and of the living God” and to carry light into the world. 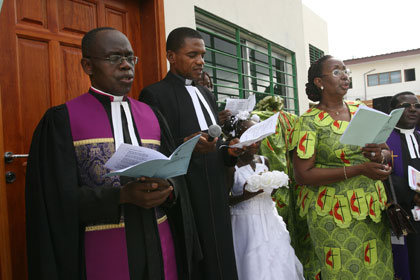 “What you have undertaken with creating this radio station is a very visionary thing to do,” he said. “It’s a very Methodist thing to do, to take the good news into the world. It’s a very faithful thing to do, to go into all the world with messages of hope, healing, peace and reconciliation.

Taking the podium, Ken Yamada, staff executive with the Board of Higher Education and Ministry, noted that the weather outside the worship service had changed.

“It is raining,” he said. “God is joining us in blessing this radio station.” The congregation applauded.

Yamada said he hopes the station will be an important educational and communications resource for the people of Côte d’Ivoire.

“The General Board of Higher Education and Ministry has already begun working with Bishop Boni and Dr. Yed Angoran (advisor to Boni) on establishing a distance-education center at the United Methodist university in Côte d’Ivoire,” he said.

The center will link with a francophone project in Europe, the North Katanga University in the Democratic Republic of Congo and Africa University in Zimbabwe. “This is another step in providing essential resources and infrastructure for the development of principled Christian leaders who will transform Africa and the world.”

The station began broadcasting Dec. 24 with a signal that covers Abidjan, the commercial capital of Côte d’Ivoire, as well as towns around the city—an area with an estimated 3 million people. While broadcasting different genres of Christian music in French and English, the station also offers programming on a range of topics identified in audience surveys—spiritual formation, health, school studies, legal aid, marriage counseling. 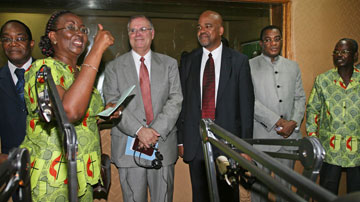 The programming reflects a principle that Boni emphasized in the service: Evangelism must address a person’s whole needs. The work of salvation isn’t restricted to the soul, he said.

“The Lord is really listening to our needs, and spreading the gospel should be our priority,” the bishop said. He told the congregation that he also envisions building a television studio.

Boni said the church must work closely with the minister of communication. Yao Saki, a representative of the minister, offered words of support. The presence of several political dignitaries reflected the relationships the church has in the government.

The church’s view of radio as a force for good was lifted up during the sermon, in which the Rev. Nathanael Ohouo preached against “evil press” and said the church’s duty is to fight negative and untruthful messages with the saving word of God.

During his communion prayer, Boni added: “We don’t want to have a press that divides, but a press that unites”—one that advances hope, not despair.

Hope was evident throughout the day, as the celebrations culminated in a three-hour concert that had the United Methodists dancing until nightfall.

*Tanton is on staff at United Methodist Communications.