A campus of the Methodist University of Angola is being turned into a testing and treatment center for COVID-19.

There have been 24 confirmed cases of the coronavirus and two deaths in Angola, which has been under a state of emergency since March 23. Churches are closed, university students have been sent home and a curfew has been established to reduce the spread of the virus.

There have been more than 25,000 confirmed cases of coronavirus in Africa and more than 1,200 deaths, according to data from the Africa Centers for Disease Control and Prevention.

The Western Angola Conference turned over the Cacuaco campus in the Funda region on April 11 at the request of the Angolan government.

During the handover ceremony, Sílvia Lutucuta, minister of health for Angola, said she was impressed with the quality of the infrastructure.

“Despite the fact that I am a daughter of The (United) Methodist Church and a professed member of this denomination, I had never known this important infrastructure of the university,” she said. “We praise God for this important step and the church for always being ready to work with the government.

“I thank the university and The United Methodist Church for their efforts to work side by side with the Angolan executive in this struggle, and for making their facilities available as an institutional quarantine center,” Lutucuta said.

She said the campus is strategically located for the flow of COVID-19 patients.

The Rev. Manuel André, an administrator at the university, said the Cacuaco campus has more than 40 large rooms, 26 offices and smaller rooms that are suitable for COVID-19 testing and treatment. 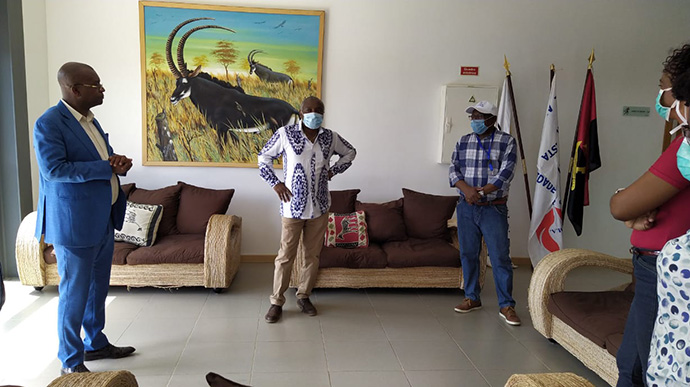 The Rev. Manuel Andre, an administrator at Methodist University of Angola and a representative of Bishop Gaspar Domingos, welcomes members of the government to the Cacuaco campus. Photo by Orlando da Cruz, UM News.
“This campus also has meeting rooms, 20 rooms already prepared for individual accommodation, a cafeteria, kitchen, gym, swimming pool, an auditorium for 316 people, wide sanitary facilities and changing rooms and laundry, among other facilities,” he said.

The buildings also have wide corridors, and all rooms are equipped with air conditioning units and good natural ventilation, Andre said.

The campus’ water supply line will be reinforced to handle the possible influx of patients, said Lucrécio Costa, the secretary of state for waters.

Andre said in addition to sharing the university campus, the conference is responding to those in need during the pandemic.

“The United Methodist Church, through its pastoral charges, is developing a campaign to deliver food baskets to reduce scarcity of food for people in need in different communities,” said Andre, who represented Bishop Gaspar Domingos at the handover ceremony.

He said 40 students from the university’s public health program also are being trained as volunteers to work at the testing center and other places as necessary.

With churches closed, United Methodists have been conducting worship services and Bible studies online and delivering messages of hope on Radio Kairos, part of the United Methodist Radio Network.

Da Cruz is a communicator for the Western Angola Conference.

General Conference, postponed by pandemic, is scheduled for late summer 2021, despite requests those dates be changed.
Social Concerns

The Four Corners Native American Ministry is among those helping tribal members and front-line workers as COVID-19 cases continue to rise on the reservation.