United Methodists from all points of the globe spent six hours in prayer for the church before beginning the 2019 General Conference’s hard work of reviewing church policy regarding homosexuality.

By midday, there had been no reference to LGBTQ people and that concern was voiced by those who support changing church policies concerning homosexuality. The second half of the prayer day began with an emotional call to pray for “our LGBTQ brothers and sisters,” issued by Bishop Debra Wallace-Padgett of North Alabama.

Dorothee Benz, a lay delegate from the New York Conference, said LGBTQ people brought concerns to the bishops that there had been “no substantial time to pray for and with us.” And, the presence of LGBTQ persons on the floor as delegates and in the bleachers holding signs and flags were not acknowledged, she said.

“I wish that the bishops would have acknowledged the harm done to LGBTQI people this morning by their silence. I wish that cisgender heterosexual bishops had come down from the stage to pray with us,” Benz said.

“But I was moved by those who came and stood with us and embraced us. We will continue to remind the church that we are here, we are as worthy of mention, as faithful, as integral to the church's future, as any Methodist,” Benz added. Cisgender refers to a person whose sense of personal identity and gender corresponds with their birth sex. 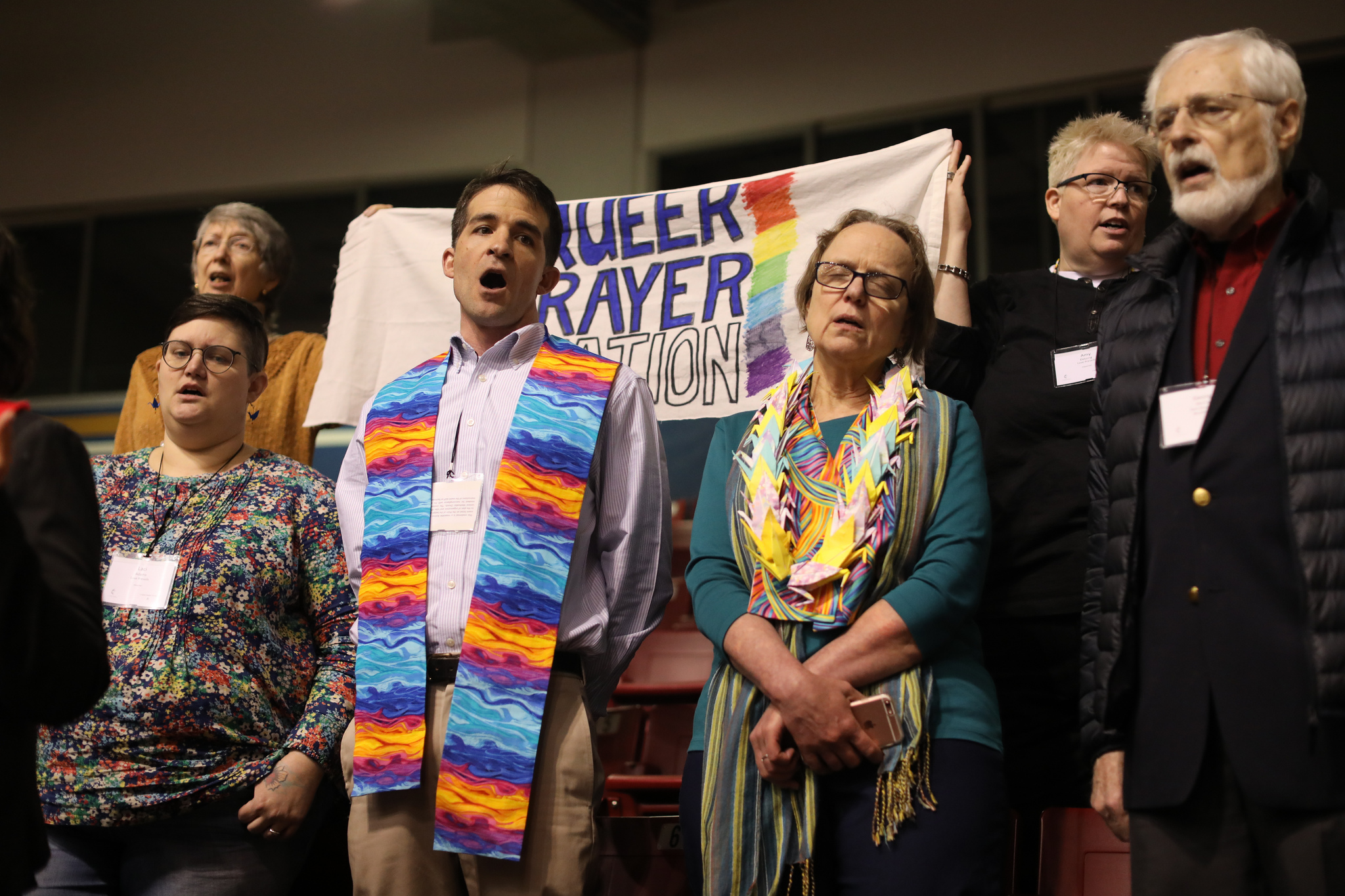 El Rev. Will Green (centro) dirige el canto de "Jesús, Acuérdate de mí Cuando Entres en tu Reino" en la "Estación de oración de los/as diferentes (Queer)" durante la mañana de oración del 23 de febrero la Conferencia General Especial 2019 en San Luis. Foto por Kathleen Barry, SMUN.
As the body came back together, Wallace-Padgett said, “We see you, we are together as part of the Christian body, and when one suffers we all suffer. We need to care for one another, stretch the hand of sacred love to one another, knowing we are children of God. With the heart of Jesus, we move into prayer time specifically for LGBTQ siblings that are here and around the world.”

As the choir began to sing “I Need You to Survive,” circles were formed around LGBTQ delegates and a rainbow flag was waved. Voices around the Dome at America’s Center, lifted up the words, “I won’t harm you with words from my mouth, you are important to me. I prayed for you, you prayed for me, I need you to survive.”

In the morning, bishops from Europe and Eurasia, Africa, the U.S. and the Philippines guided the gathering in experiential prayer sharing the mission, ministry and challenges of The United Methodist Church.

Bishops Eduard Khegay, Moscow Area, and Harald Rückert, Germany Area, led the group in singing the Swedish hymn, “How Great Thou Art” — first in English and then in Swedish.

Bishop Mande Muyombo, North Katanga Area, in his booming voice, said “In Africa we pray loudly. We pray hard. We pray for the church. It is a wonderful church that transforms the poor.” 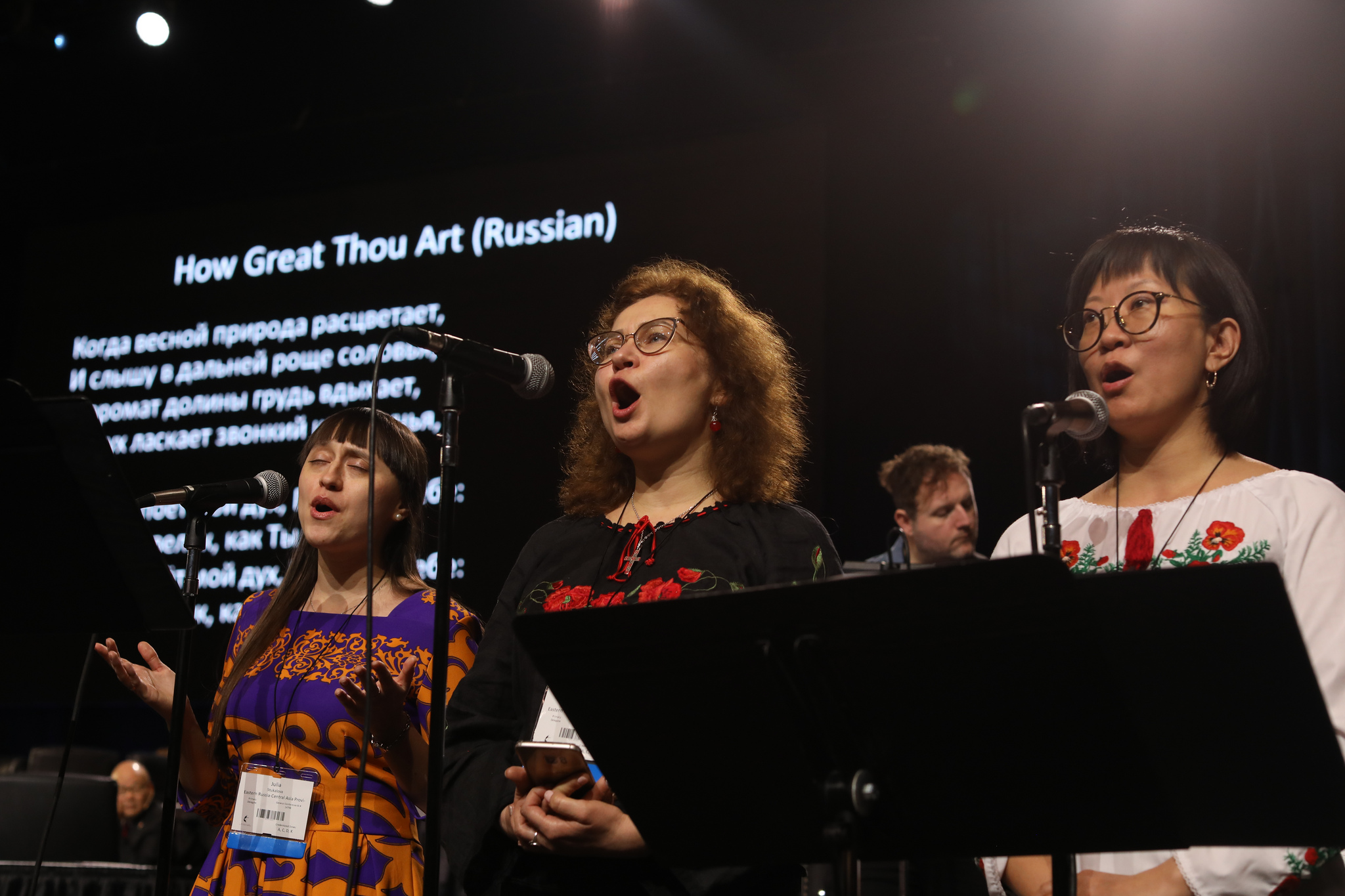 “Here we are again, God. United Methodists are conferencing again, a little sooner than usual. We need your guidance a little more than usual.”

Beata Ferris, delegate from the Dakotas Conference, felt the Day of Prayer “set the right tone” and found herself and those near her on the floor literally moved by some of the more international elements.

“People were clapping and dancing and singing with the African music, and trying to sing in Russian and Swedish,” she said. “I have a feeling we didn’t do a very good job, but we tried very hard.”

The Rev. Ben Lalka, a licensed local pastor serving Victor United Methodist Church, in Victor, New York, described himself as “in-between” on how the first day was spent.

“It is good to set the precedent of a time of prayer, a time of discerning God’s will for our church,” he said. “But this is my first General Conference, and I’m worried that we won’t have enough time (for legislative work). But I’m trying to trust in the Holy Spirit, trying to trust in our leadership.”

Bishop James Swanson Sr. of the Mississippi Conference said during the lunch break that a first General Conference day devoted to prayer was “something we should have been doing all along.”

Swanson said that while many delegates have their minds made up about legislation, others don’t. And the benefit of prayer goes beyond discernment, he added.

“It might help us with attitude. That’s what I’m more concerned about – attitude, and how we treat each other.”

Swanson said the bishops he sat near and prayed with were visibly moved by the Eurasian and African prayer-in-song offerings.

“It really highlighted our diversity.”

Staying together through all the storms was a recurring theme in the prayers spoken in the many languages of the denomination.

Bishop Kenneth Carter, president of the Council of Bishops, and Wallace-Padgett modeled a prayer for the delegates.

Facing each other, holding hands, they repeated to each other, “If I have done anything intended or unintended to harm you, please forgive me. May the peace of Christ be with you.” 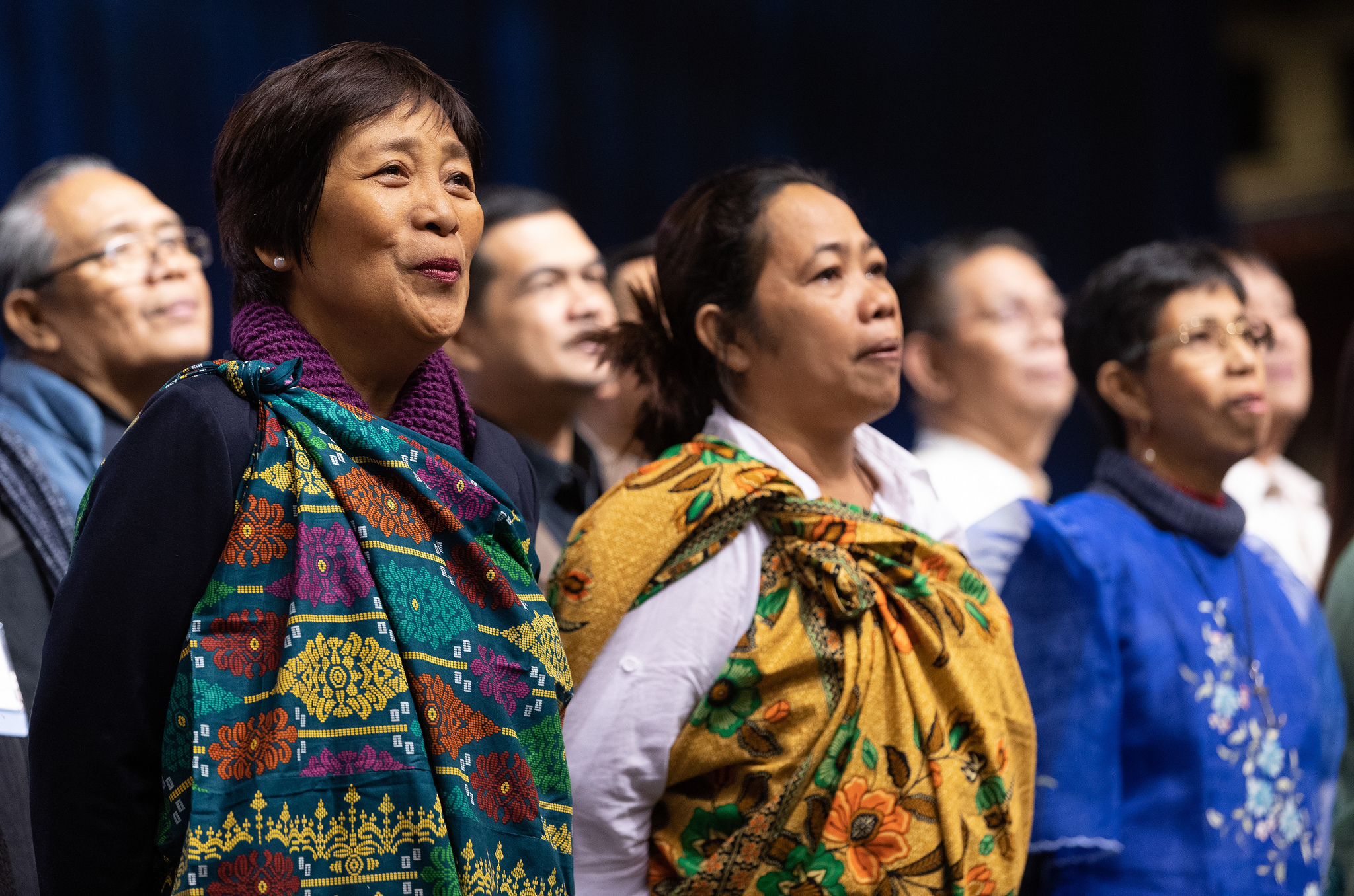 Delegates from the Philippines and Southeast Asia sing during a day of prayer at the 2019 United Methodist General Conference in St. Louis. Photo by Mike DuBose, UMNS.
Gilbert is a multimedia reporter for United Methodist News Service. Sam Hodges and Joey Butler contributed to this story. Contact them at 615-742-5470 or [email protected]. To read more United Methodist news, subscribe to the free Daily or Weekly Digests.