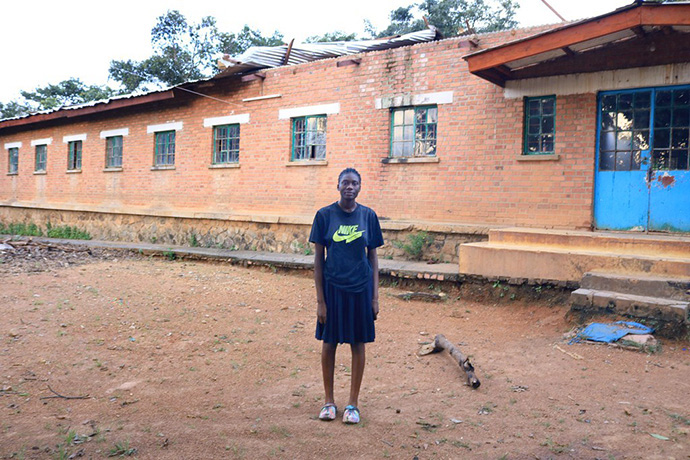 Kibambe Kazadi Gracia, a student at Mulungwishi Secondary School, stands in front of the girls' dormitory where part of the roof was blown off at Mulungwishi Mission, a United Methodist mission in the South Congo Episcopal Area. Photo by John Kaumba, UM News.

The United Methodist Church’s Mulungwishi Mission suffered significant wind damage during recent storms. A computer science student was injured when a brick fell on his head.

The United Methodist mission in the South Congo/Zambia Episcopal Area houses a university, a women's school, a medical clinic, and elementary and secondary schools.

Mulungwishi is located about 93 miles from the city of Lubumbashi, in southwestern greater Katanga. Founded in 1913 by the first bishop, John Springer, it is also home to the first United Methodist university in Congo.

According to Professor Kongolo Chijika, rector of the Methodist University in Katanga, the rain began at about 4:30 p.m. on March 8 with a violent wind that blew away the roofs of the houses.

The boy who sustained the head injury has been in intensive care, and his condition is improving, Chijika said.

The seminary, women’s school and university at United Methodist Mulungwishi Mission are supported through several Advance projects through the United Methodist Board of Global Ministries.
Click here for more information

Musolo Kongolo, deputy director of the women's school, was on site when the storm struck.

“I was in the building with two wives of student pastors and two workers,” she said. “We were all afraid of the way the rain and wind were increasing, and we began to pray to implore the hand of the Lord on us, as we already felt in danger. All of a sudden, we saw the roof ripped off the building.”

The damage varies from building to building. “The school of the women does not function; in certain classrooms, the pupils do not study,” he said.

The Rev. Mwelwa Musenge, pastor of the Mulungwishi station, said pastors’ homes were also wiped out, “not to mention the number of trees that were uprooted.”

Kibambe Kazadi Gracia, is a sixth-year student studying humanities, math and physics. “We are all traumatized,” she said. “For the moment, we are crammed into the girls’ dormitory of the university.”

Chijika is seeking help from Congo authorities and partners in rebuilding and repairing buildings at the historic United Methodist site. He thanked God for saving him and his family. “That day, in the middle of the rain,” he said, “we were all in the house. We were afraid that a tree might fall on the house.”

This was the first disaster due to high winds recorded in this part of the South Congo/Zambia Episcopal Area since the mission was established.

Chijika has lived and worked at Mulungwishi for 40 years, starting as an undergraduate and then a graduate student.

“I worked as an assistant at the Faculty of Theology, and in 1995, I went to Canada for my doctorate,” he said. “I have done a lot of work in the administration of the Methodist University in Katanga, but I have never experienced such a catastrophe here.” 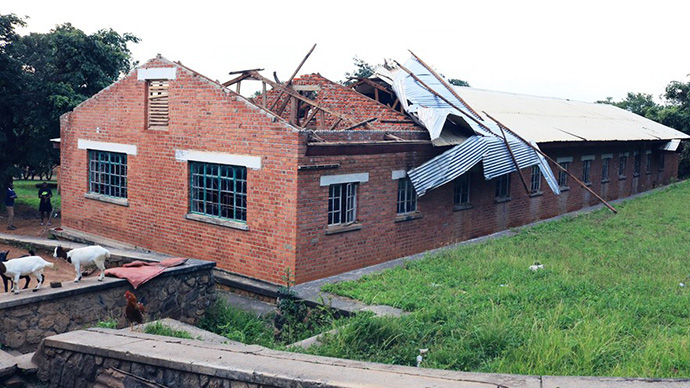 A girls' dormitory at United Methodist Mulungwishi Mission was among the buildings damaged during a storm on March 8. The mission in the South Congo Episcopal Area houses a women's school, medical clinic, elementary and secondary schools and the first United Methodist university in Congo. Photo by John Kaumba, UM News.

Since 1951, Mulungwishi has trained United Methodist pastors throughout the world. From Mulungwishi, other theological faculties were formed throughout Congo.

“The Faculty of Mulungwishi, which is the mother of all the faculties in Congo, gave birth to the Faculty of Wembo Nyama, followed by the Methodist Faculty of Kamina, as well as the Faculty of Kindu,” Chijika said. In the South Congo/Zambia Episcopal Area, four faculties are now universities: Lubumbashi, Kolwezi, Kasaji and Kapanga.

The Rev. Honoré Kasongo Lyemo, superintendent of the Samarie District in Lubumbashi, was a graduate student from 1996 to 1999, and did his undergraduate degree from 2002 to 2004. He finished by obtaining his master’s degree in leadership and management at Mulungwishi.

In tears, student Gracia said, “We want to launch a distress call to all the elders who have passed through Mulungwishi to support us, all the partners of The United Methodist Church and people of goodwill. We women and children want to study in good conditions. We need your assistance.”

Kaumba is the director of communications for The United Methodist Church in the South Congo/Zambia Episcopal Area.

Funds from the United Methodist Committee on Relief’s International Disaster Response program helped purchase food and other supplies for people in Beni who have fled attacks in outlying areas.
Mission and Ministry