• Justice Ruben T. Reyes served on both the Supreme Court of the Philippines and the top court of The United Methodist Church.

• Friends say he brought an understanding of legal complexities and a passion for prayer to deliberations.

• At the time of his death at age 82, he was still serving as the Judicial Council’s vice president.

Justice Ruben T. Reyes served as a respected jurist on the top courts of both his country and his church.

As a member of the United Methodist Judicial Council and former associate justice on the Supreme Court of the Philippines, Reyes had a broad knowledge of the law in varied contexts.

Fellow United Methodists say he also brought to his deliberations a passion for prayer and an ability to maintain good relations amid deep disagreements.

Reyes died Sept 13 in his native Philippines at the age of 82. At the time of his death, he was serving as vice president of The United Methodist Church’s Judicial Council.

“Ruben was devoted to God and committed to service in his vineyard,” said N. Oswald Tweh Sr., the Judicial Council’s current president and an attorney in Liberia.

Reyes also was a friend and mentor to Filipino United Methodists ministering around the globe.

Liberato “Levi” Bautista worked alongside Reyes when they were both lay leaders in the Philippines Central Conference, which encompasses United Methodist churches across the island nation. Reyes was chair of the board of laity, and Bautista was the national president of the United Methodist Youth Fellowship.

“He was very congenial to young people and their concerns,” said the now Rev. Bautista, who heads the United Nations office of the United Methodist Board of Church and Society.

“He was tenderhearted, so that while we may have disagreed occasionally on the floor of the sessions of the central conference, we remained good friends — our humanity needful of redemption always being at the heart of how he sustained relationships.”

Bishop Rodolfo Alfonso “Rudy” Juan, who leads United Methodists in the Davao and Baguio areas of the Philippines, said Reyes was "a compassionate and supportive leader."

"He had a heart for the lowly," the bishop said. "As a faithful lay leader of The United Methodist Church in the Philippines, he and his family supported young workers, especially those engaged in campus ministry!"

The Rev. Edgar De Jesus, president of the National Association of Filipino American United Methodists, called Reyes a father figure. Reyes stood with De Jesus and his wife at their wedding. The late justice also hosted the Filipino American association’s 2018 gathering in Manila.

“His love for family, his church and service to the judicial system in the Philippines and the global UMC were inspirational and life-giving to many among us,” said De Jesus, who is also pastor of Davis Street United Methodist Church in Burlington, North Carolina.

Reyes was still on his country’s Supreme Court when General Conference first elected him to the church court in 2008. He was re-elected again in 2016, and that same year his fellow Judicial Council members chose him as their vice president.

“Justice Reyes was a thorough and committed jurist paying meticulous attention to the many aspects of cases,” said the Rev. Susan Henry-Crowe, Judicial Council president in 2008-2012. She now is top executive of the United Methodist Board of Church and Society.

“Justice Reyes brought both his loyal United Methodist identity and his legal acumen to the Judicial Council. Widely traveled, he understood cultural contexts as well as the complexity of various legal systems, which informed his thinking on United Methodist legal matters.” 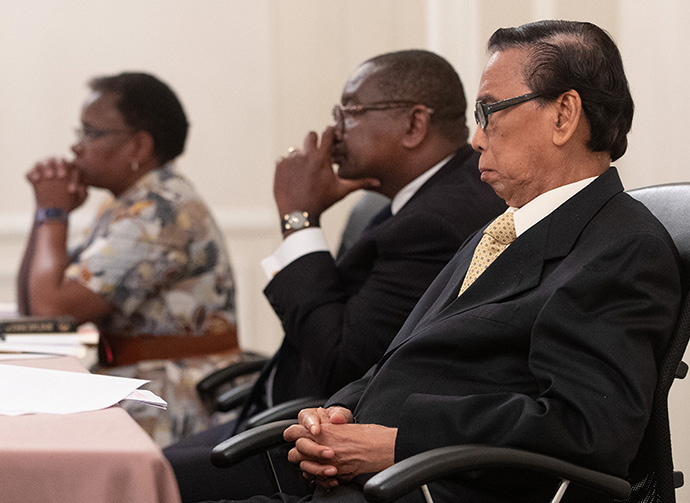 The Rev. William B. Lawrence, who was also elected to the Judicial Council in 2008 and was later its president in 2012-2016, said he learned that clergy on the court often approached church law in different ways from the experienced attorneys.

“Occasionally, when Ruben spoke during our deliberations, we learned legal phrases that were used in the Philippines, though we lacked them in the United States,” Lawrence recalled. “And in such moments, I just sat back and smiled as the lawyers pondered how to say something that could be written in different ways in different lands.”

During Reyes’ tenure, the Judicial Council ruled on questions of law arising from some of the church’s most contentious debates. He participated in decisions on denominational structure and clergy due process, as well as multiple legal questions related to denominational rules on homosexuality.

Judicial Council rulings are unsigned, with members only signing their names to dissents or concurrences. When members are absent, elected alternates step in.

The Rev. Dennis L. Blackwell, a Judicial Council member since 2004, said Reyes modeled how to maintain good working relationships even amid challenging deliberations.

“He was the kind of man who could disagree with you and then leave the disagreement on the table,” said Blackwell, pastor of Asbury United Methodist Church in Woodlynne, New Jersey. “He could go toe to toe with you, and whether you prevailed or he prevailed, you’d go out to lunch and laugh together, and it would be over.”

“Ruben was always desirous of knowing the JC decisions that related to the issue before us,” she said. “He was very glad to receive information about additional cases that may apply to the matter that we were to deliberate.”

Multiple Judicial Council members also spoke admiringly of Reyes’ quirky sense of humor that could ease tense moments and his eagerness to cover their meetings in prayer.

Reyes was born on Jan. 3, 1939, in Hagonoy, Bulacan, a municipality north of Manila.

He was an active member of Central United Methodist Church in Manila, where he took on multiple roles including lay leader. He also became an accomplished lawyer who worked in private practice and then as a trial judge.

He was appointed to the Philippine Court of Appeals in 1994 and eventually was the court’s presiding justice in 2005. Philippine President Gloria Macapagal Arroyo appointed him to the nation’s highest court in 2007 and he retired in 2009 when he reached the mandatory retirement age of 70.

But even as he rose through the legal ranks, friends say Reyes remained deeply committed to Christian service including his role as president of the Philippine National Prayer Breakfast Foundation.

The Rev. Øyvind Helliesen, elected to the Judicial Council in 2016, said Reyes was a deep, convinced Christian.

“He believed in prayer,” said Helliesen, who is a United Methodist chaplain in Norway. “He was proud when he told us about his role in the ‘Prayer Breakfast’ in the Philippines.”

Reyes’ survivors include his wife and fellow lawyer, Ellie, his four children and 10 grandchildren. Interment will be Sept. 16 at Holy Cross, San Bartolome, Quezon City. Because of COVID-19 restrictions, no visitors will be allowed at the wake or interment.

“Justice Ruben Reyes was a great servant of the church,” she said. “We give thanks for his faithful leadership in the Judicial Council and for his contributions to the greater United Methodist Church.”

The banners she made blessed many

Ruth Gene Tucker, who died on June 24, created hundreds of Christian-themed banners that hang in her church, Christ United Methodist in Farmers Branch, Texas, and other places. Her pastor, the Rev. Scott Holcomb-McClain, reflects on Tucker’s life and ministry.
General Church

Ask The UMC continues to answer questions, address misperceptions, and counter misinformation about The United Methodist Church and the process of disaffiliation from it.
Violence

Innocence was lost, but writer translated the trauma of the moment into new goals and dreams of helping others.