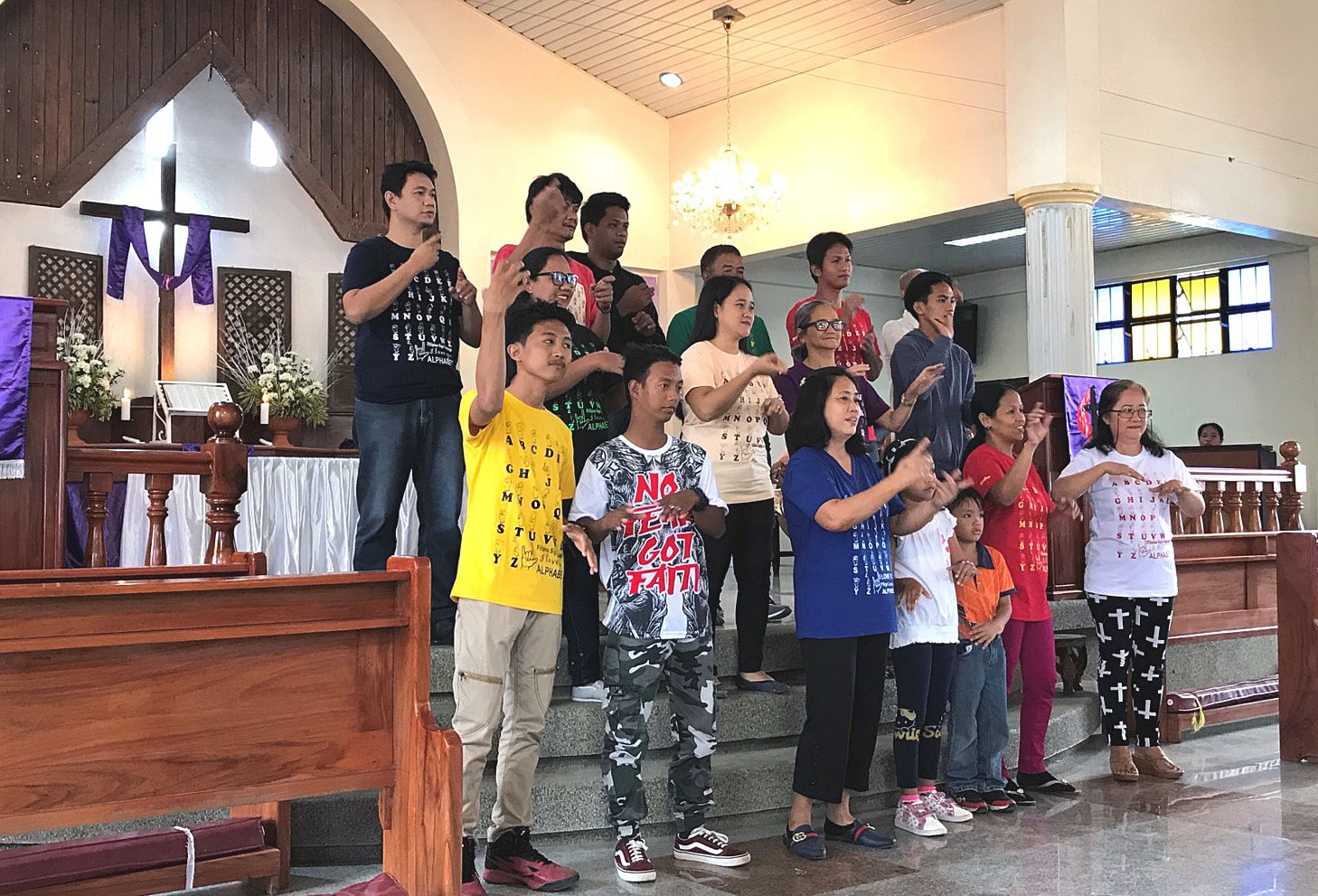 A United Methodist deaf choir signs the words of a hymn during worship in the Baguio Area in northern Philippines. Across the country, an assessment team saw evidence of church vitality. Photo courtesy of the Standing Committee on Central Conference Matters.

The United Methodist Church in the Philippines faces plenty of challenges, including a large number of annual conferences and a struggle to pay workers a living wage.

However, an assessment of the country’s three episcopal areas found overall “a very strong and healthy UMC in the Philippines, with leaders working hard with an entrepreneurial spirit and creativity.”

Members of the Standing Committee on Central Conference Matters, which works with the church regions in Africa, Europe and the Philippines, presented the assessment during the committee’s meeting in Manila.

The seven-member team made the report as part of gauging whether the Philippines Central Conference should have more than three bishops.

Bottom line: The team recommended no increase to episcopal leadership.

“Based on what we have seen and the current climate of deep budget reduction at the general church level, we feel confident that the current three episcopal areas are fully adequate to provide the leadership needed in the Philippines Central Conference,” the report said.

The team did recommend Filipino United Methodists further discuss the size and number of conferences in their country. The team’s report also advised continued cooperation among the episcopal areas “to learn from one another and to increase the resources they bring to their common struggles.”

Assessing the number of bishops

The Book of Discipline, the denomination’s policy book, requires that the number of central conference bishops be determined based on missional potential.

By Discipline, the standing committee must consider:

The committee must also complete further analysis of the context and missional potential for changes in the episcopal areas.

Christine Flick, a team member from Germany, told the standing committee that the team found common strengths in churches across the country.

“There is a strong spirit of evangelism and a growth mindset,” she said. “All the churches are encouraged in mission.”

For example, the report noted, churches in every district have a commitment to plant and financially support new worshipping congregations until they are self-sufficient. Some local churches support as many as four new worshipping communities.

An archipelago that consists of more than 7,000 islands, the nation faces many of the same hardships as other developing nations, with the added battering of typhoons exacerbated by climate change.

The United Nations ranks the Philippines 113th out of the 189 countries on its 2018 Human Development Report, which looks at such factors as life expectancy, expected years of schooling, environmental sustainability and poverty.

The Baguio Area, in the northern part of the country, has launched Covenant discipleship groups that basically function as Wesleyan class meetings and micro-finance cooperatives, providing help to members who do not have access to traditional banks and credit. The ministry bears the name CARE for the Margins, which stands for “Christ Assures Resources for Everyone.”

The Davao Area, in the southern part of the country, has made creating income-generating projects to build church sustainability a priority. These include tapping rubber trees, cultivating fruit and vegetable farms and transforming the episcopal offices into a retreat center.

The Manila Area, in the central part of the country, is working to address human rights abuses.

“Respect for human rights is one of our pet projects because here in Manila there are so many human rights violations that the church should speak and do its prophetic role,” said Francisco, who also chairs the standing committee.

However, the nation’s economic troubles mean many local United Methodist churches cannot pay clergy and deaconesses a living wage, and there are limited funds at the district and annual conference level to subsidize pay. 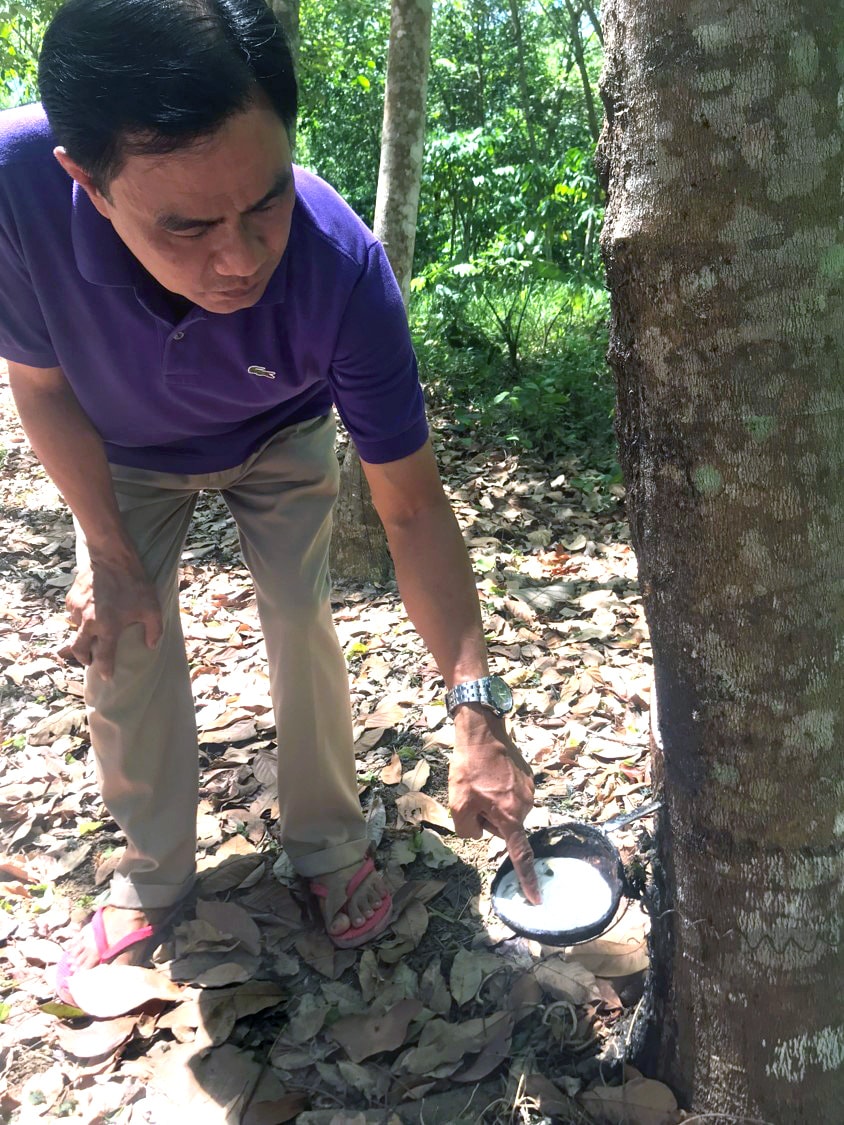 Bishop Rodolfo Alfonso “Rudy” Juan crouches near a rubber tree during a visit by United Methodists to his Davao Area in southern Philippines. The Davao Area has launched a number of income-generating projects to support ministry, including tapping rubber trees. Photo by Bishop Harald Rückert of Germany.

In confronting this problem, churches get creative. In some places, larger churches help supplement the salary of church workers in smaller churches. Some local churches supply their pastors with rice, corn, chickens and other foodstuffs. Still, many pastors must take second jobs.

The Manila Area has initiated an effort to centralize providing a standardized salary for ordained clergy, deaconesses and licensed local pastors. Each church in the area now sets aside 1% of its annual budget to ensure these church workers receive at least minimum compensation.

The country is home to a total of 207,190 lay United Methodists and 1,910 clergy, according to the most recent figures shared with the team.

Those United Methodists live in 26 annual conferences, church regions that meet once a year. Some of those conferences consist of a single district, and some barely meet the requirement that they have 25 clergy members.

Some United Methodist leaders have questioned the number of Philippines conferences because each annual conference, no matter how small, receives at least two delegates at General Conference, the denomination’s top lawmaking assembly.

The assessment team’s report didn’t mention the debate over delegate allotment. But it did note there are clear advantages to having small conferences, particularly when dealing with island geography that makes travel a real challenge.

Smaller conferences also encourage giving, the report said, because people take pride in supporting their annual conference where they have close relationships.

However, the 26 conferences come with extra costs as well, the report said. Among those are the heavy administrative load and travel schedule placed on the three bishops. Also, each small conference bears increased expenses for personnel as well as committees and meetings required by the denomination’s Book of Discipline.

Finally, the reported noted, the multiple small conferences results in “a reduction in the ability for people to learn from one another across different contexts.”

The three bishops in the Philippines all expressed gratitude to the team members for their assessment work.

Torio said the team’s visit and conversations gave people “another experience of The United Methodist Church as a global church.”

The board of The United Methodist Church’s finance agency has approved a monthly stipend for active bishops who serve more than one episcopal area in this time of disruption.
Bishops