The integrity of The United Methodist Church’s lawmaking body will be the focus of a special task force digging into possible voting improprieties at the recent 2019 General Conference.

Some are already questioning whether members of the Commission on the General Conference can fairly investigate, since the commission credentials and oversees voting at General Conference. The 12-member task force has been authorized to negotiate with auditing firms to help with the work.

Debate is ricocheting around the church about whether an independent group is needed for a completely transparent investigation.

Uniting Methodists, a group supporting unity of The United Methodist Church, called for an “open-book process” for the investigation in a statement.

“With all due respect for the commission’s work, given the serious nature of accusations related to voting at the highly polarized St. Louis session, the circumstances require an independent investigation,” the statement reads. More than 800 delegates aimed to set the denomination’s direction in its longtime debate over homosexuality during the special General Conference.

New York Area Bishop Thomas Bickerton, a member of the Commission on the General Conference and a member of the task force that will be looking into potential voting irregularities, said integrity is also his primary concern.

“It is disappointing to think there has been any kind of impropriety whatsoever,” he told United Methodist News Service.

He also pointed out the task force has not had its first meeting yet.

“When the committee organizes and begins to discern what direction to take, I believe they will give full consideration to whatever it takes to find out the full truth, which may include an independent investigation,” he said. 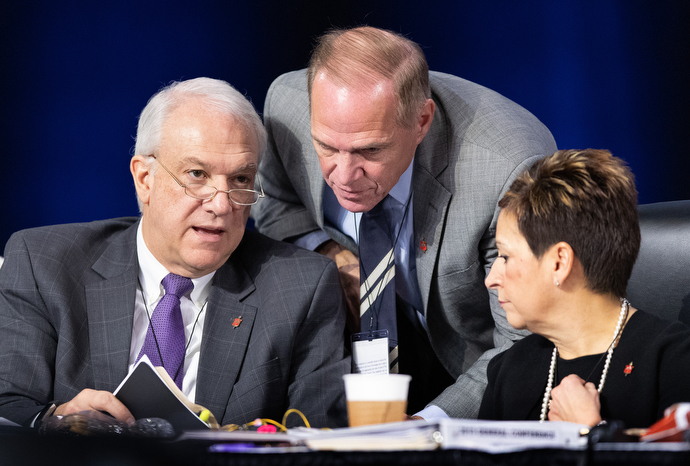 Bishops confer during the 2019 United Methodist General Conference in St. Louis. From left are Bishops Thomas Bickerton, John Schol, and Cynthia Fierro Harvey. Bickerton, a member of the Commission of General Conference and a member of the task force that will be looking into potential voting irregularities, said integrity is his primary concern. “It is disappointing to think there has been any kind of impropriety whatsoever.” Photo by Mike DuBose, UMNS.
Duncan McMillan, commission chair, voiced similar sentiments.

“The commission is deeply committed to ensuring the integrity of the legislative process and we take seriously our responsibility to look into this matter fully. Once we have completed a thorough review, we will consider next steps,” McMillan said.

The task force was formed after revelations of potential voting irregularities at the lawmaking assembly. Delegates there adopted the Traditional Plan, which reinforces the denomination’s bans on same-sex weddings and “self-avowed practicing” gay clergy while adding enforcement measures.

The Rev. Gary Graves, secretary of the Commission on the General Conference, has said the number of ineligible voters was too slim to affect the outcome of the vote on the Traditional Plan or the defeat of the One Church Plan. The One Church plan would have left questions of marriage up to individual clergy and churches, and ordination up to annual conferences.

However, a vote that would allow churches, within limitation, to leave the denomination while keeping church property was decided by a two-vote margin. Graves said since voting is by secret ballot, it is unknown if the possible ineligible voters supported a particular outcome.

Kasap told United Methodist News Service that he thought an independent investigation would be best, as long as the Commission on the General Conference has the funds. His son Philippe Kasap Kachez’s credentials are among those being questioned.

“I hope we do not waste time on blame,” said Kasap, who contends the furor over voting is because people are unhappy about the outcome of the special General Conference.

While Kasap Kachez is not listed on the delegate attendance records, both he and the bishop said he was elected as reserve in 2018. Bishop Kasap provided a copy of the 2018 South Congo Conference journal, which lists Kasap Kachez’s election as a reserve.

An organization investigating itself is “a prescription for disaster,” said Stephen Drachler, a crisis communications consultant working with faith groups, governmental entities and other organizations. He also served as a General Conference delegate in 1992, 1996 and 2012.

“In last year’s election for North Carolina’s 9th District in the U.S. House of Representatives, allegations of improper conduct with absentee ballots caused the state elections board to order a new election. The evidence showed that while the number of fraudulent votes cast in the tight election wasn’t enough to change the final result, the election was tainted to the point it needs to be redone. This could be what has happened to the 2019 General Conference. An independent investigation is the only way to credibly find out,” he writes in a blog.

The Rev. Keith Boyette, president of the Wesleyan Covenant Association, said the Commission on the General Conference has proceeded properly to appoint a task force of its members according to the United Methodist Book of Discipline and the Rules of General Conference.

The Wesleyan Covenant supports the Traditional Plan passed by the 2019 General Conference.

“The Commission on the General Conference has established robust means to guard the conference’s integrity and we commend its ongoing efforts to fortify those means where necessary,” he said.

The Rev. Jim Harnish, a member of Uniting Methodists, said an independent investigation could provide some recommendations for selection and credentialing of delegates for 2020.

Harnish said the primary intention in speaking out is to ensure transparency and truthfulness. Rumors and accusations after General Conference increase the distrust in the denomination, he said.

“It damages the witness of the church in the world. … I hope we can overcome some of the things that divide us rather than reinforce our differences,” he said.

United Methodists rose to the challenge of caring for survivors of the Sept. 11 terrorist attacks, but many of these helpers needed support afterward for their own trauma.
General Church

A pioneer of the Korean United Methodist Church, former bishop Hae-Jong Kim passed away on Nov. 3.
Mission and Ministry

Being the church at epicenter of US pandemic

United Methodist leaders paint a sobering picture of the coronavirus impact on New York and New Jersey but also show the church is still at work.