Kim was considered a pioneer, planting Korean immigrant churches with zeal. He planted the first Korean church in New Jersey and 15 other Korean churches, including the Korean Community Church of New Jersey, and provided direct and indirect support to those churches.

Kim’s ministry was not without controversy.

Elected to the episcopacy in 1992, he served the New York West and Western Pennsylvania conferences before retiring in 2004 and then resigning as part of the resolution of a complaint filed against him.

The details of the January 2005 disciplinary complaint were kept confidential. As part of the resolution process, he resigned as bishop while retaining his clergy credentials.

Kim resumed his ministry as a pastor of Alpine Community Church in 2008.

Kim was born in Kwang-Ju, South Korea, in 1935. He became a Christian during the Korean War at the age of 17. While working for the United States Marine Corps chaplain as an interpreter, translating sermons before Korean audiences, he decided to enter into ministry. 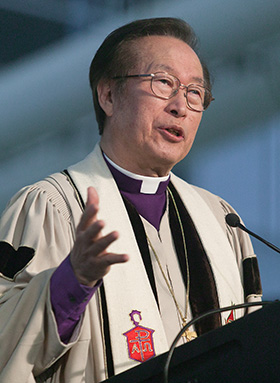 “I have never seen a person as passionate about planting Korean churches as (Kim),” said the Rev. Sang-Kong Choi, pastor of Christ United Methodist Church of North Huntingdon in White Oak, Pennsylvania. “He was a pioneer in the Korean immigrant church. It was a blessing to me that I was also able to experience the planting of a Korean church because of my relationship with him.”

Choi said that after planting a church, Kim contacted area bishops, superintendents and the Board of Global Ministries to find and provide possible assistance to the planted churches.

“Through his dedication, sacrifice, support and encouragement, the Korean church grew and bore fruit,” he said.

The Rev. Kwang-Jin Kim, a former president of the Association of Korean American United Methodist Churches, said that Hae-Jong Kim was a role model for his own ministry.

“God brought him to this country and equipped him to be a leader to serve The United Methodist Church and save the Korean people. That is the grace of God that I learned through Kim,” he said.

During the Korean War, Kim was a shoeshine boy for an American soldier. After Kim was elected as bishop, he invited that soldier to the first annual conference he presided over.

“I am so grateful for the grace of God,” Kim said. “Joseph also served as a houseboy in Egypt. Just as he eventually saved Egypt and became the prime minister of Egypt, God called me, who was a shoeshine boy, here to the United States, and now I am a bishop of The United Methodist Church.”

“First of all, I thank the Lord for the leadership and exertion of the Rev. Hae-Jong Kim,” he said. “The Korean United Methodist Church remembers his pioneering dedication and passion. He had to endure countless conflicts and solitude during his leadership journey, which was like a pilgrimage route.

“Since he has finished his journey of faith and joined so great a cloud of witnesses, I sincerely pray for the consolation of the Lord to the bereaved family who have lost their mother and father in a short period of time."

Thomas Kim is director of Korean and Asian news at United Methodist Communications. Contact him at 615-742-5470 or [email protected]. To read more United Methodist news, subscribe to the free Daily or Weekly Digests.