No matter what happens at the special General Conference next year, United Methodists will wake the next day and still have work to do.

That was a frequent refrain at the April 4-7 meeting of the Connectional Table, a leadership body of 64 lay and clergy members who act as a sort of denomination-wide church council coordinating ministry.

The Connectional Table devoted most of its discussions to how it can help the church fulfill its calling during this time of uncertainty and beyond the 2019 policymaking assembly, which will deal with the denomination’s decades-long divisions over homosexuality.

“We might not know what it will look like, but we can be sure that there will still be a United Methodist Church,” preached the Rev. Kennetha J. Bigham-Tsai in her opening sermon. “And there will still be God calling our church to be in mission in the world.” 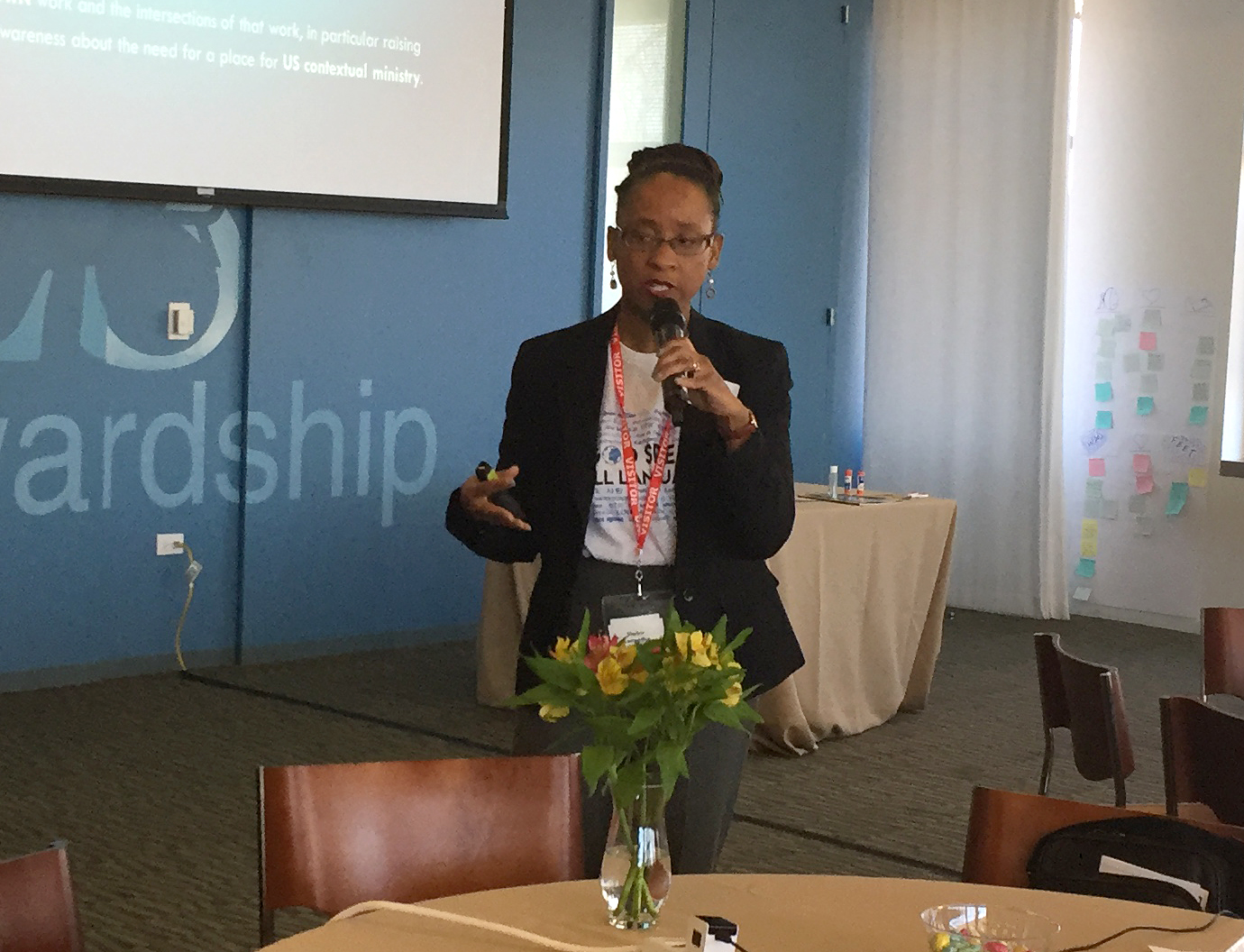 The Rev. Kennetha J. Bigham-Tsai speaks during the April 2018 meeting of the Connectional Table in Chicago. The meeting brought her on board as the body’s chief connectional ministries officer. Photo by Heather Hahn, UMNS.

At the end of its meeting, the Connectional Table also worked on and subsequently released the same message to the wider church.

“The world is in need of the saving love of Jesus Christ, and The United Methodist Church has always been an effective witness of Christ’s love,” the letter said. “It is vitally important that we continue to be so now. Therefore, today and every day, the mission is yet alive.”

The Book of Discipline, the denomination’s governing document, describes the Connectional Table’s purpose as “the discernment and articulation of the vision for the church and the stewardship of the mission, ministries and resources of The United Methodist Church.”

Signs printed with that purpose surrounded the Connectional Table members as they worked.

The meeting was more about discussion and discernment than any action.

In small groups, members conversed about ways of strengthening the worldwide connection of the multinational 12.5 million-member denomination.

They also talked about ways to boost the denomination’s four areas of ministry focus.

Members also heard various presentations that looked to the church’s future as well as its past.

Who is On the Connectional Table?

In addition, the body brings together other denominational leaders, including the presidents and top executives of the denomination’s 13 general agencies and General Conference. The executives have voice but not vote.

The Rev. Alfred T. Day III, the top executive of the United Methodist Commission on Archives and History, offered an overview of how Evangelical United Brethren and Methodist churches joined to form The United Methodist Church 50 years ago. He noted that 1968 was a time of division, just as today is.

He held out hope The United Methodist Church might still be a countercultural witness of unity amid difficult times just as it was a half-century ago.

Pieterse reminded the leaders that struggle within the church is nothing new.

“Strictly speaking one ought to say that the church is always in a state of crisis and that its greatest shortcoming is that it is only occasionally aware of it,” he said, quoting the Dutch theologian Hendrik Kraemer.

One challenge facing The United Methodist Church that both Pieterse and Connectional Table members pointed to is the need to live into its connectional covenant outlined in the Book of Discipline’s section on mission.

“Integrally holding connectional unity and local freedom,” that section says, “we seek to proclaim and embody the gospel in ways responsible to our specific cultural and social context while maintaining ‘a vital web of interactive relationships.’”

To address the church’s current challenges of living into its global nature, Pieterse encouraged his fellow United Methodists to view God — not any single part of the church — as the center of mission.

“God is working in mission whether or not we are there,” he said.

“To be sent, theologically speaking, is to be beckoned from the future where God is already at work.”

After each presentation, Connectional Table members took time to converse and reflect on the material. The meeting also included daily worship and Holy Communion.

Nordic-Baltic Area Bishop Christian Alsted, chair of the Connectional Table, said near the meeting’s conclusion that the leadership body’s work can benefit from taking time for such conversations.

“As United Methodists, we are often very preoccupied with the end product, but there is something of value to be said about the conferencing process, particularly when it comes to discerning and articulating vision,” Alsted said. “It takes time. It takes much prayer. It takes much conversation. It takes much careful listening.”

The Connectional Table, which acts as a church council for the denomination, boosts United Methodist efforts to get people around the globe inoculated against COVID-19.
General Church