As the nation prepared to choose the next U.S. president, a handful of people gathered for prayer at New Life United Methodist Church, in rural Ripley, Tennessee.

“We are a small church but we are trying to change the world,” said the Rev. James Paris, the part-time local pastor. “Remember the Bible says the small will confound the mighty, 1 Corinthians 1:27.”

Paris and his church were hardly alone.

Across the U.S., and in the midst of the COVID-19 pandemic that has killed more than 231,000 people in the U.S., United Methodist churches responded to the contentious political environment by offering special services and prayer opportunities tied to Election Day. 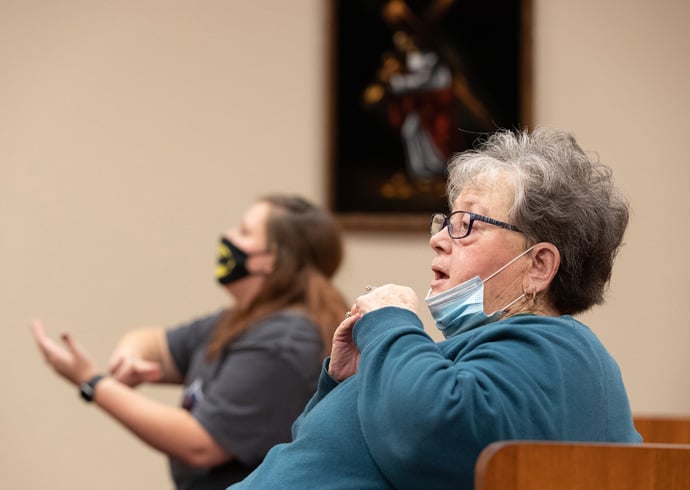 Los Alamos, New Mexico. Manchester, Missouri. Charlotte, North Carolina. In these locations and many others, United Methodists planned pre-election, Election Day and even post-election gatherings for reflection and Christian perspective.

“Go out and vote tomorrow if you haven’t already. God wants everyone to vote,” Paris said, emphasizing he was not telling people how to vote but only encouraging them to vote and pray for the U.S. leaders.

In a highly divided nation, he said, the tendency is to draw lines based on who you like or dislike.

“Pray and seek God before you vote, let the Holy Spirit lead you,” he said from the pulpit.

He also encouraged the gathering to keep up with the news, be in touch with local leaders and hold them accountable.

The group at New Life United Methodist, converted from a masonry shop into a church beginning in 2010, spoke prayers aloud, at Paris’ urging.

“We pray each night for our country before we go to bed,” said Billie Paris, the pastor’s wife. “We need God back in our country.” 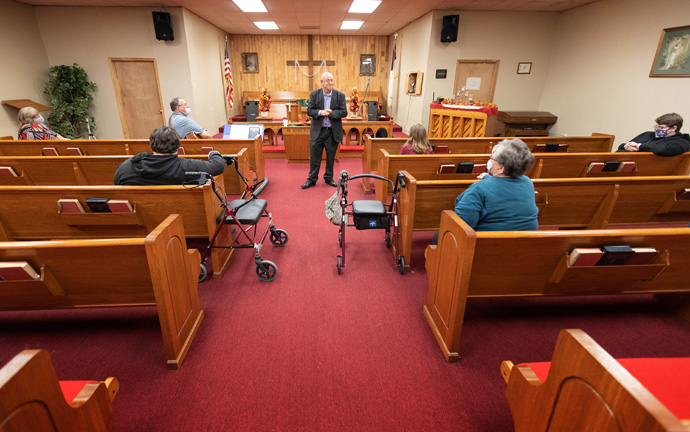 Prayer changes things, the pastor added. “Jesus prayed a lot. If Jesus prayed, how much more do we need to pray?”

Prayer was a constant as United Methodist churches worked around the pandemic to respond in faith to Election Day anxiety and partisanship.

The sanctuary of Christ United Methodist Church in Rochester, Minnesota, has been closed for months because of COVID-19. But Election Day saw the doors open again, with all welcomed inside for prayer.

“It will offer the comfort of place and the power of place for many of us (in a time of political upheaval),” said the Rev. Elizabeth Macaulay, pastor.

About 40 seminary students and graduates in the Atlanta area planned to staff voting precincts as poll chaplains in Georgia on Election Day.

“It’s undeniable that people tend to behave when there are people around in clerical collars,” said the Rev. Nicholas Grainger, a first-year student at United Methodist Candler School of Theology at Emory University and student pastor at Haralson United Methodist Church in Senoia, Georgia. “So, as a pastor this is how I can minister to my community beyond my local church and be a presence.”

First United Methodist Church in Los Alamos, New Mexico, planned an online communion service for the evening of Election Day.  The Rev. John Nash, senior pastor, said the event will help get across that political beliefs are important but not most important.

“Our hope and our salvation rests with Christ,” he said. “When we forget that we are, first, committing idolatry. Second, we’re forgetting what binds us together as the body of Christ.”

Nash’s church is part of Election Day Communion, an ecumenical, Mennonite-led campaign begun in 2012. Thirty churches across the country enlisted this year, 12 of them United Methodist, according to the campaign website.

One is Richfield United Methodist Church in Minneapolis. The Rev. Nate Melcher said his church’s online communion service would be  the start of a pastoral care push extending through Advent.

That’s needed due to the election, the pandemic and racial conflict, he added.

“We’re going to be in a very tender time as a nation as we step into the rest of 2020,” Melcher said. 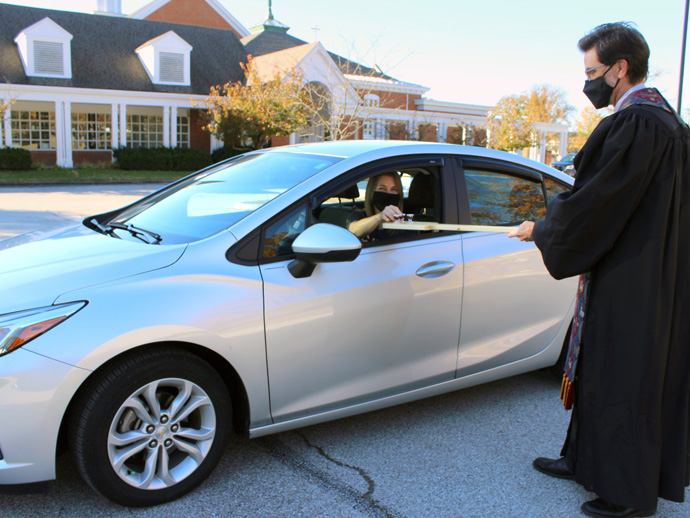 Church member Chad Brenton adapted boat paddles so that communion elements can be set into them and safely extended into open car windows. The Rev. Andy Bryan, pastor, looked forward to delivering the Lord’s Supper by oar.

“In a particularly divisive campaign season and election, I just feel it’s more important than ever to announce and embody our essential oneness in Christ,” he said. “The best way to do that is communion.”

Some pastors were asking congregants to pray for the political candidates they are hoping will lose, along with supporters of that candidate.

“I’ve always found that it’s hard to make someone an enemy who you have prayed for,” said the Rev. Lathem Postell, associate pastor of Due West United Methodist Church in Marietta, Georgia.

At Due West, church members prayed about the election during half-hour blocks on Nov. 2.

In north central Pennsylvania, a heavily Republican area, the Rev. Jane L. O'Borski hoped to inspire compassion on both sides of the political divide.

“Despite which candidate wins, I think we have a sense of it’s OK to hurt one another with our words and actions. I don’t believe that’s true, and I’m hoping we can inspire a sense of peace,” said O’Borski, pastor of Wyalusing, Hollenback and Spring Hill United Methodist churches in Wyalusing, Pennsylvania.

Spring Hill, near a polling place, was to be open on Election Day for prayer.

Lake Travis United Methodist Church in Austin, Texas, welcomed people to spend part of Election Day praying outside or inside its sanctuary. The event was to conclude outside with socially distanced hymn singing.

Like a lot of United Methodist churches, Lake Travis has its share of committed Democrats and Republicans.

“It’s just so important that we see each other as neighbors and as children of God,” said Patty Highland, music director.

Three precincts in Baton Rouge, Louisiana, were voting on Election Day in the family life center of St. John's United Methodist Church. At the front of the church’s property, eight prayer stations were set up under oak trees.

“People can come by anytime from dawn until dusk,” said the Rev. Lane Cotton Winn, lead pastor. “We have a really beautiful piece of property … where people can have a time of quiet solitude and reflection.” 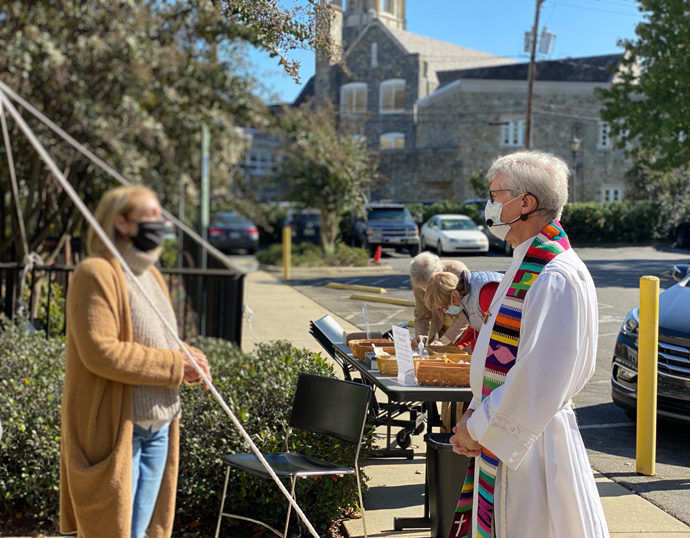 The Rev. James Howell, senior pastor at Myers Park United Methodist Church in Charlotte, N.C., greets a member outside the church where a communion service was held with social distancing. Photo by Sarah Gibson.

Howell said he often tells people that while political participation is important, a focus on political ideology distracts from Jesus’ “higher and nobler agenda.”

“They nod and listen when I tell them this,” Howell added, “but then they lose their minds when they turn on CNN or Fox.”

Gilbert, Hodges and Patterson are writers for United Methodist News. Contact them at 615-742-5470 or [email protected]. To read more United Methodist news, subscribe to the free Daily or Weekly Digests.