The United Methodist Church in both Norway and Germany made decisions about becoming more inclusive of LGBTQ people in their congregations.

During a virtual meeting in late November, the Norway Conference made plans to issue a public apology to LGBTQ people as part of an ongoing process leading to full inclusion. The United Methodist Church would be the first church in Norway to issue such an apology.

The executive committee of The United Methodist Church in Germany agreed to be more open on matters related to human sexuality, while also creating a “Community Covenant” aimed at accommodating those members and congregations from a more traditional, conservative perspective.

The executive committee, meeting Nov. 20-21, accepted by an “overwhelming majority” a proposal from the 21-person roundtable chaired by Germany Area Bishop Harald Rűckert. The roundtable, despite differing opinions on homosexuality, submitted the proposal to the committee unanimously. Delegates of the Germany Central Conference were there to discuss the proposal and recommended the committee accept it, but did not vote. 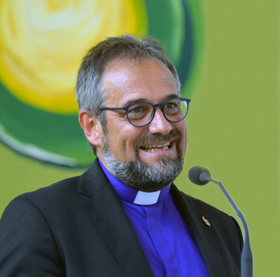 The decision suspends negative and restrictive passages of the German version of the Book of Discipline related to homosexuality — including the ban on same-sex weddings —while ensuring that pastors and churches from the conservative wing of the German church are “not required to act against their own conscience,” the church said in a news release.

The committee’s actions are provisional until the next meeting of the postponed Germany Central Conference in November 2021. The executive committee expressed its hope that these changes make it possible to stay together as a church in the spirit of “convicted humility” and noted that the plan preserves the connectional nature of the church.

At the Norway Conference, there was a long debate about the wording of the planned apology.

“For me, personally, it means not that much. I belong to Moss United Methodist Church, an open church that has always welcomed me as a gay person,” said Lasse Gåsland Skage, a lay delegate from that church who initiated a network for Methodists who identify as LGBTQ in Norway.

“But for many before me who did not feel welcome, and for people with kids and grandkids who are gay, I believe this is very important. I believe there are many who feel that the church is undoing a long-time injustice,” he said.

A sentence from Ole-Einar Andersen, who brought the apology proposal to the floor, was cited as a good starting point for the text.

“We acknowledge that through condemnatory attitudes and actions we have inflicted great harm, pain, sorrow and suffering on fellow human beings, contrary to the gospel of God’s unconditional grace and love for all,” Andersen wrote.

The formulation of the text will be left to the conference’s executive board and cabinet.

The amendment passed with 70 votes in favor, 32 against and 6 abstentions. 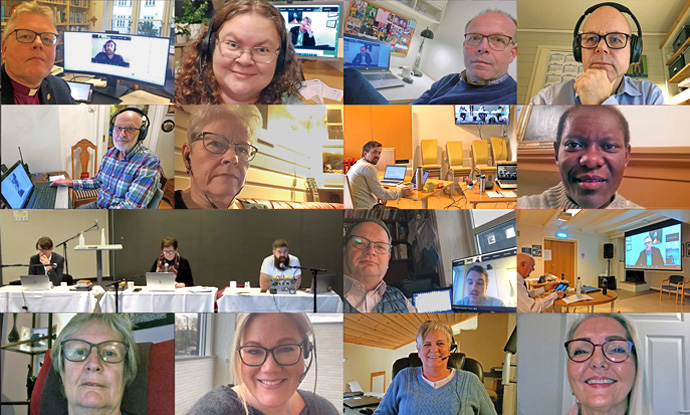 Attendees of the virtual meeting of the Norway Conference held in late November (including Noridic and Baltic Area Bishop Christian Alsted, top left) shared selfies taken during the session. The Norway Conference plans to issue a public apology to LGBTQ people as part of an ongoing process leading to full inclusion. Image courtesy of Karl Anders Ellingsen, The United Methodist Church of Norway.

The conference postponed considering two proposals, one to temporarily lift restrictions on marriage and ordination of LGBTQ people in The United Methodist Church, and another to reject restrictions adopted in the Traditional Plan, which passed the 2019 General Conference. Those two proposals will be considered at the first annual conference after the next United Methodist General Conference.

The move to full inclusion began at the 2019 Norway Annual Conference.

“This is a natural part of this process that we started last year. I’m pleased to see that we have a clear direction and goal,” said Audun Westad, who is the chair of the conference executive board.

“The dream is a fully inclusive church for everyone. It’s good to see that also this year’s annual conference with many new delegates maintain a clear majority for this process,” he said.

During its discussion, the German church’s executive committee agreed on many parts of the decision to be more inclusive while protecting the rights of those with a more traditional perspective through the Community Covenant.

“I can't quite realize yet what has happened now,” said Rückert. “This is an important stage, but we still need a lot of care and consideration for each other, so that the plant of trust can grow and flourish in our churches.”

The path can only succeed, the bishop added, “if we focus on God and are willing to go the way forward all together.”

Bishop Patrick Streiff, resident bishop for the Central Conference of Central and Southern Europe, took part in the Germany executive committee meeting for a few hours, joining from his office in Zurich, Switzerland.

He expressed “high respect for the culture of conversation” that he experienced.

Because the human sexuality discussions also led to differences in his own conference, Streiff said he was interested in the German discussion and the decision of the executive committee.

At the 11th General Assembly of the World Council of Churches, around 3,000 participants from 120 countries met to discuss the future direction of ecumenism.
Local Church