Achieving voting rights for all in the U.S. means pushing “from the ideal to the reality,” says the Rep. Emmanuel Cleaver II, a United Methodist pastor and longtime representative of Missouri’s 5th Congressional District.

For many Americans, that will be a difficult and uncomfortable process, the Democratic congressman points out, a process that means acknowledging and ending the structural racism that hampers the 1965 Voting Rights Act. Key parts of the law were invalidated by the U.S. Supreme Court in 2013 and efforts to reauthorize those have failed.

However, Cleaver is heartened by diverse crowds of young people coming together to march against racism. “That’s the part that provides me with the gasoline to continue to go because they are out, in some instances, putting their lives on the line,” he said.

Cleaver, 75, spoke with Erin Hawkins about his faith and his perspective as a congressman and an African American during The United Methodist Church’s fifth online discussion about eradicating racial injustice. Hawkins, an executive with the California-Pacific Conference, was until recently the top executive of the denomination’s Commission on Religion and Race.

The Oct. 7 discussion is part of “Dismantling Racism,” a multi-agency effort that includes participation from Religion and Race, the Council of Bishops, United Methodist Women, Discipleship Ministries, the Board of Church and Society and United Methodist Communications. Other agencies and many annual conferences are contributing.

Cleaver, a Texas native, comes from a family of preachers and militants — two cousins were leaders in the Black Panther Party. He was inspired by activist pastors of the 1950s and 1960s, including the Rev. James Lawson — whom Cleaver called “the single most influential civil rights leader in the country that most people don’t even know” — and eventually decided to go to seminary himself.

A successful run for city council in Kansas City, Missouri, eventually led to Cleaver’s election as that city’s first African American mayor in 1991 and to Congress in 2005.

Cleaver can recount instances of voter suppression. He recalled how Waller County officials moved the voting precinct for about 5,000 black students at Prairie View A&M University in Texas — the historically black college where he graduated — from the student union to 27 miles across town to make it difficult to cast a ballot. “This was not just some random official,” he said. “This was organized and deliberate to suppress the Black vote. And it happens all over the country.” 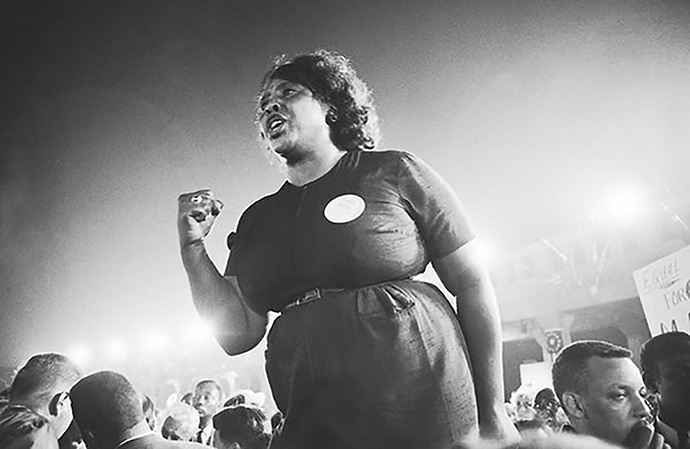 Fannie Lou Hamer was a voting and civil rights activist whose work helped lead to the passage of the Voting Rights Act of 1965. File photo by Ken Thompson, United Methodist Board of Global Ministries.

The Q&A that follows is a condensed version the conversation between Hawkins and Cleaver, which can be viewed in full here.

Hawkins: We’ve got a pandemic, an election, Black Lives Matter, all kind of working together around who’s in and who’s out, who has power and who doesn’t, who is disproportionately impacted and who seeks to gain. What’s important about this moment, especially when it comes to the matter of voting and voter suppression?

Cleaver: We are struggling right now as a nation to fulfill who we are. We have said for the world to hear: ‘We hold these truths to be self-evident that all men are created equal, that they are endowed by their creator with unalienable rights, among them life, liberty and the pursuit of happiness.’ The problem is that we’ve not made that actually happen. And so we’re trying to push the country from the ideal to the reality. And it’s a difficult push and it’s uncomfortable to many for the push to be able to take place.

And I think right now it’s different than any other moment that I have ever experienced because I’m watching young people, black and white and brown, coming together saying: Look, we are tired of this boogey man here in the United States: race/racism.

I’ve stood speaking to marchers in Kansas City, Missouri, and I was almost brought to tears because of the diversity of the group (of 7,000 to 8,000 people). And there were more whites than blacks. That’s the part that provides me with the gasoline to continue to go because they are out, in some instances, putting their lives on the line.

One would think that in a democracy that everyone would want everyone to vote. Unfortunately, it’s been the reverse, and it’s been almost since the day after Lyndon Johnson signed the Voting Rights Act. And in all the years that I’ve been in office there’s been an attempt to stop the impact of the 1965 Voting Rights Act.

Right now in your cities — anywhere in the country — things can be moved as it relates to the election. Changes can be made. In 1965, the Voting Rights Act said that could not happen until or unless there was an administrative review by the (U.S.) attorney general. That’s gone right now. (The U.S. Supreme Court invalidated that requirement in 2013.)

When you say, ‘watch people at the polls,’ that can be interpreted any number of ways. And the one way that I’m sure to interpret much of this is that that’s a point of intimidation. You surround people around the voting precincts. Or you start telling people, ‘L’ook, there’s a lot of voter fraud.’ All of the studies… the Brennan Center here in Washington, most of the studies, they will tell you that if you have 25 million people voting and … 19 of the votes are questionable, you essentially don’t have a problem. And that’s the case in the United States. We have no voter fraud of any significant level.

When they start passing voter ID laws, that hurts us. Let me tell you why. They’re saying you’ve got to have some kind of government ID. So if you’re not a driver, if you don’t drive a car and have a government-issued driver’s license, in Texas and a lot of other places they will sell you a state identification for $27 or whatever it is. Well, the moment you pay that $27 to get some ID, you just paid a poll tax.

Hawkins: Are there other communities of color or socio-economic groups that are targeted by these tactics of voter suppression?

Cleaver: Absolutely. Black and brown people are particularly the targets. Latinos, Latinas, you know, are experiencing the same issues that we are as African Americans. They, too, are struggling. The first generation of people here in the country, many of them are afraid to go and get a voter registration because they think that it might have something to do with immigration. Even if they’re legal, they are nervous about it.

Hawkins: How do we talk to people who don’t believe voter suppression is a matter that requires attention and action?

Cleaver: Well, I think this is as clear as water. But I think you’re right. There are some people for whatever reason … you know, some people may seriously and genuinely believe that anybody can vote. They may want to believe it because they don’t want to believe that they are citizens in a country that would try to prevent people from voting. And so it’s difficult for them to accept that because they have to accept the fact that this nation does have systemic racist tendencies.

Hawkins: Armed with this awareness … what would you suggest to us to do as Christians, as United Methodists, as people who are a part of this country?

Cleaver: My suggestion is the same suggestion that (U.S. Rep.) Jim Clyburn is giving to voters in South Carolina. He’s saying, “Go vote now.” As soon as it’s legal for people to vote because of all the things surrounding this election, we’re saying go vote now in person.

We have here the freedom of religion that is not offered in some places around the globe. We also have a God that grants us free will to make decisions. And one of the decisions I think we ought to make is that we’re going to participate fully in society, trying to make society something that would be in harmony with God’s will.

Strengthening the Black Church for the 21st Century will offer tips on innovative ministries and better use of technology at its 2021 conference in Houston, which will be a hybrid live and virtual event.
General Conference

Organizers named the values that will guide their decision on whether the denomination’s legislative assembly goes forward as scheduled.
Social Concerns