As a young man, the Rev. James Lawson was chosen by the Rev. Martin Luther King Jr. to train young civil rights peacemakers to fight racism with love and respect — to step into the fray and say, “I follow Jesus.”

“That was a powerful mantra that I learned in the Methodist Youth Movement in the ’40s and ’50s,” said Lawson, a United Methodist elder who is now 91.

Lawson’s life work has been to create a nonviolent nation.

He said some historians call the civil rights movement a Black church movement because the Black church was the only place where members of the movement could meet safely.

“Many of the mass meetings were a modification of a worship service, a religious meeting,” he said.

Watching the Black Lives Matter campaign today, Lawson said this movement is the most important nonviolent campaign since the movement in the 1960s that he and the late John Lewis and C.T. Vivian helped lead.

“As a student of nonviolence and history, this past spring I have said the 21st century has a chance to have movements like this one. To be far larger and more dynamic than anything we did in 20th century.” 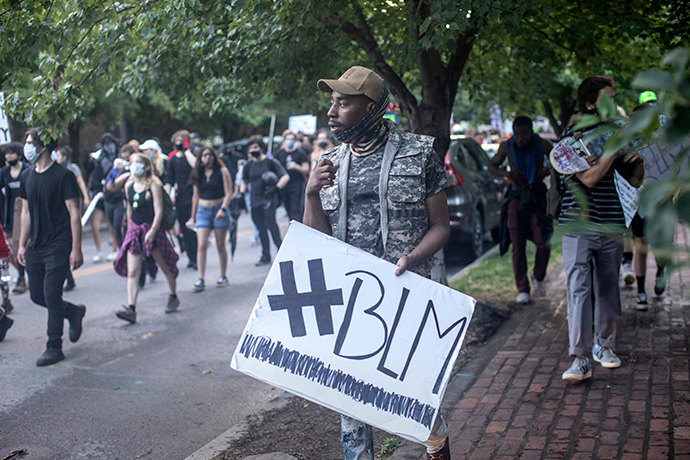 People walk in support of the Black Lives Matter movement during a June 4 march in Nashville, Tenn. The Rev. James Lawson says he has watched the movement growing as people have gathered in 700 cities to speak the names of people killed by police. File photo by Kathleen Barry, UM News.
Lawson still teaches nonviolence at the University of California, Los Angeles and at California State University in Northridge. He lives in Los Angeles, where he is pastor emeritus of Holman United Methodist Church.

Lawson has watched the movement growing as people have gathered in 700 cities to speak the names of people killed by police. The network is offering the nation something unique, he said.

“They have organized around the grief and offered a ministry to the families of the Black men and women who have been shot and killed by police. They have helped those families to grieve, helped them to be empowered — to not let the murder, the execution of their child, go quietly away.”

He calls it a modern religious movement.


“Now Trayvon Martin’s father and mother are involved with George Floyd’s family. They have surrounded almost every family with a ministry of healing.”

The movement is giving a voice and addressing the pain of the families, helping them to turn over their grief to God and to stand up as a family, Lawson said.

The movement and families are saying, “This is not God’s will. To me that is astounding and it is happening in our society today,” he added.

“In public life you have a movement that is trying to be a minister to the families and therefore to the nation. Look at that network, they are helping them to heal all over the country.” 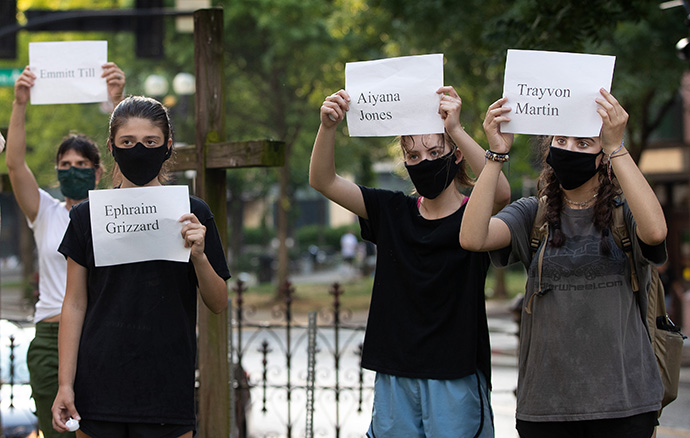 People gather in the courtyard of McKendree United Methodist Church in Nashville, Tenn., during a June 4 prayer vigil to grieve and remember people lost to acts of racism. They are holding signs in honor of victims of racial violence. File photo by Mike DuBose, UM News.
Calling this movement a protest is focusing on the wrong word, he said. The media doesn’t see it, they don’t study the people.

“Protest is such a bad term because all those marches and walks are calling the U.S. to a new way of life.

“The movement is calling for the dismantling of the old forms of racist violence that we have taken for granted and replacing them with new forms of kinship that will allow us to be a far stronger nation and better people. Repent of the sin and take on new life, that is a Christian and religious mantra.

“Break down sin, repent and discover new life in the process. The great story that is lasting and eternal. We churches need to see that story.”

The Rev. Dr. Tori Butler interviews the Rev. Wanda Bass, who was present to witness the first Black woman being elected bishop in the South Central Jurisdiction.
Bishops

Bishop Thomas J. Bickerton used his first address as Council of Bishops president to call on backers of a breakaway denomination to stop mischaracterizing The United Methodist Church.
Social Concerns

The United Methodist Church supports workers' rights in a heritage that goes back to early Methodism in England.