Long-term recovery is an accurate description when it comes to Katrina.

The United Methodist Committee on Relief closed out its last grant to the Mississippi Conference in December 2013. Even now, training must continue and equipment and facilities maintained in preparation for the next major disaster.

The same is true for Louisiana.

“From 2005, until we closed shop in 2012, we helped over 125,000 households in the state of Louisiana,” said the Rev. Darryl Tate, director of disaster response for the Louisiana Conference.

United Methodists in that state multiplied about $35 million allocated by UMCOR with volunteer labor and other gifts, bringing the total to an estimated $139 million worth of in-kind donations, he added.

Epworth Project in Slidell, Louisiana, still sends more than 1,400 volunteers a year to help homeowners like Betty Johnson in East New Orleans. This summer, she sat on her back porch watching teams of young people do in a few months the repairs she tried for 10 years to finish. Her house is not the only one on the street that still needs major repairs.

Many congregations make Louisiana or Mississippi the destination for annual youth mission trips. Ginghamsburg Church in Tipp City, Ohio, has sent 85 teams, including one earlier this summer. Hundreds of volunteers and homeowners have formed life-long relationships.

From that point on, Roeder-Kunkel started gathering mission teams to go to New Orleans. “We’ve become a real family,” she said.

United Methodists raised nearly $70 million for hurricane relief and recovery on the Gulf Coast. Newsweek magazine ranked the United Methodist Committee on Relief sixth in a survey of “Big Names in Katrina Relief.”

“We knew from the very beginning we had to do this right,” said the Rev. Tom Hazelwood, then UMCOR’s executive secretary for U.S. disaster response. “And I feel like we did.” 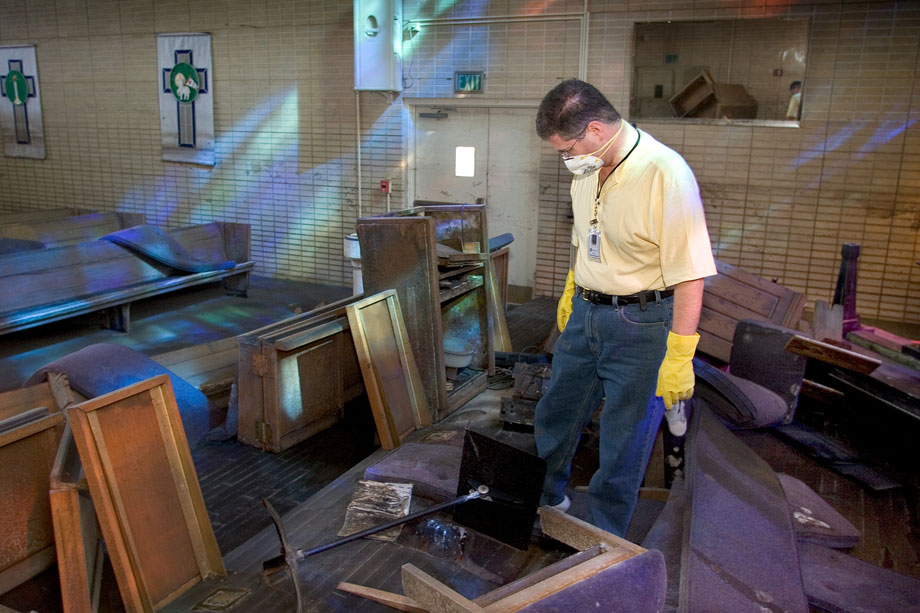 The Rev. Darryl Tate views the ruined sanctuary of St. Luke’s United Methodist Church in New Orleans for the first time since he fled Hurricane Katrina in this 2005 file photo. File photo by Mike DuBose, UMNS.
A decade later, Hazelwood is still amazed that within the first year following Katrina, every U.S. congregation seemed to have “a laser focus” on responding.

Local churches raised money, sent teams and gathered supplies. “Every Sunday school class was talking about it, every worship service prayed about it,” he said. “Because we were so focused as a church, I think it drove what UMCOR did.”

Those efforts meant everything to many people.

Tom Bocek and his family lost not just one but two homes after Katrina. Their second home was destroyed by fire the day they moved in new furniture.

Bocek, a retired military man, was working to rebuild his second home when he just lost hope.

“I dropped to my knees, exhausted. I said, ‘God, I know I’m a strong military guy but I’m done, there is nothing left in men, I am out of hope.”

That’s when an UMCOR van drove up with 11 volunteers. They came in smiling, they prayed, they helped hang sheetrock. 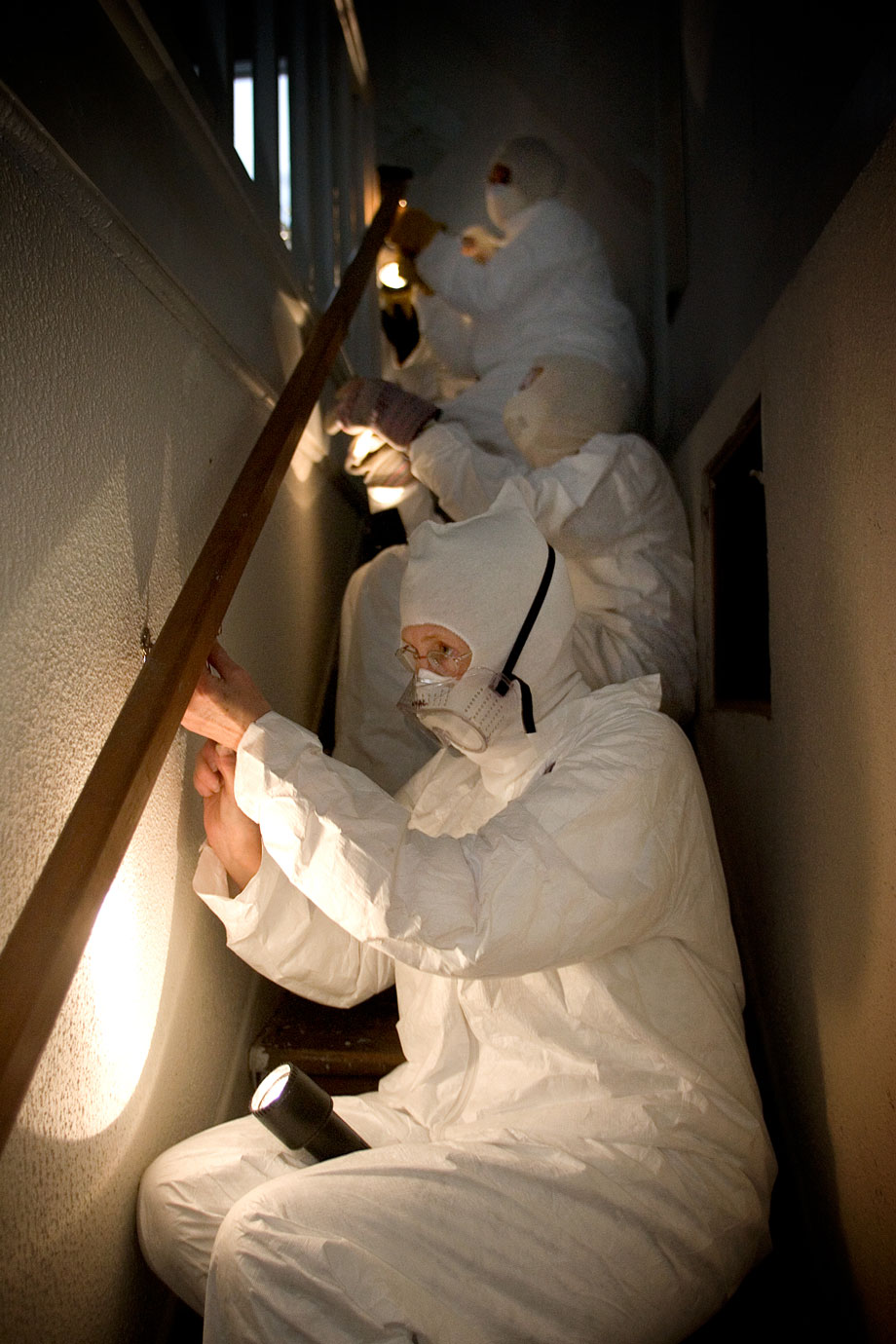 Sue Bymul (front) works with other members of her team from Christ Church United Methodist in New York at the home of Alberta Paige in Biloxi, Miss., after Hurricane Katrina in this 2006 file photo. File photo by Mike DuBose, UMNS.

For two and a half years after the hurricane, UMCOR oversaw Katrina Aid Today, a national case management consortium funded through a $66 million grant from the Department of Homeland Security and Federal Emergency Management Agency.

That grant, funded by donations from foreign governments for post-Katrina rehabilitation, was the largest single government-managed grant ever given to the private sector for disaster response.

At its peak, Katrina Aid Today had 138 offices in 34 states. Each of the nine faith-based and voluntary organizations in the consortium, including UMCOR, provided in-kind services and their own aid for Katrina recovery. Before closing on March 31, 2008, the program assisted more than 73,000 households with long-term recovery.

It was the first such cooperative venture and Hazelwood attributes its creation to the Rev. Paul Dirdak, who was UMCOR’s top executive at the time.

“He was the catalyst who saw what we could do and was smart enough to figure out how we could put together a proposal that would work,” Hazelwood said.

The team that made it work included Hazelwood, the Rev. Kristen Sachen, Jim Cox and Warren Harrity, who wrote the proposal for Katrina Aid Today. Harrity and Cox both later served terms as the organization’s executive director.

Catherine Earl — currently UMCOR executive secretary for disaster response in the U.S, Caribbean, Central America —  made it all happen by developing the training methods used for case management, Hazelwood said.

What was needed, Earl said, were skilled and capable people with just “the right mix of empathy and common sense” to offer individual assistance and help Katrina survivors plot their next steps and navigate complicated disaster recovery systems.

The United Methodist Council of Bishops also established the Katrina Church Recovery Appeal and distributed $2 million in February 2007 to help restore damaged church facilities, pay salaries for clergy while their congregations could not, establish new congregations or consolidate existing ones, renew church-based community ministries and provide churches in need with worship resources. 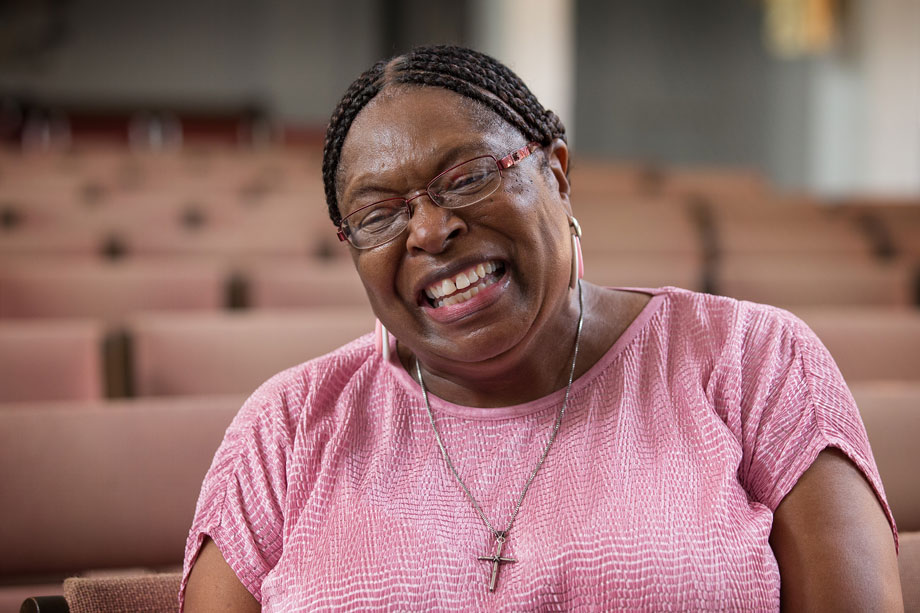 From start-up to streamlined

UMCOR’s own disaster response for Katrina was a three-stage process: an emergency stage of up to 10 days; the relief stage, to help homeowners who needed to muck out, assess damage and receive emotional and spiritual care, and the long-term recovery stage.

“We were deader than dead after Katrina,” Crawford said.

The Rev. Don Cottrell, provost of the United Methodist Louisiana Conference, said the city has probably shrunk by 100,000.

“New Orleans is not the place it was but it is still a great place,” Cottrell said.

Central New Orleans and the French Quarter are back to normal, he said, and people have learned a lot over the past 10 years about starting over.

Now they are one: First Grace.

Right after the storm, the combined congregation averaged around 60. Now, with 285 members, the church has added a Spanish language service on Sundays. The church’s doors are open most days and nights with ministries ranging from a homeless shelter for women and children to a legal clinic for immigrants.

“When we first started there was a great deal of anxiety with African-Americans and white members saying, ‘Oh, we are going to lose our identity.’ During that five-month courtship that’s when we looked at what will we retain and what will we give up. What is it that makes us the body of Christ?” said Margaret Ferguson Washington, one of the first members of First Grace. 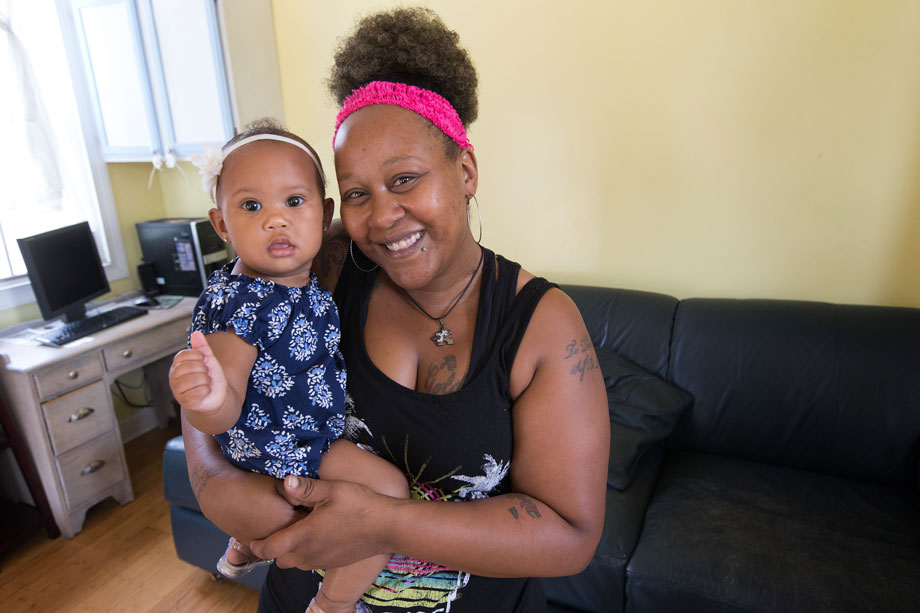 Shante and her 10-month-old daughter, Ja'Lyn, are residents of Hagar's House, a sanctuary for women and children in New Orleans. The ministry was begun by First Grace United Methodist Church following Hurricane Katrina. Photo by Mike DuBose, UMNS.

Many homes, churches and businesses took a beating but Moore Community House, a United Methodist mission that has been in Biloxi for 90 years, came through the storm stronger than before.

“I would never had believed, in 2007, if someone had told me in 2015 (that) I would say there were silver linings to Katrina,” said the Rev. Carol Burnett, director, laughing. It took the center until 2010 to reopen at a cost of about $3.5 million.

“Now, we have this incredible facility that was built for early childhood education. What we had before were these tiny little single family houses that were maintenance headaches.”

Another United Methodist ministry that is going stronger than before is Seashore Mission. The day shelter for the homeless provides 200 meals, three days a week. It also provides showers, laundry facilities, free clothes, a food pantry and a rousing Sunday worship service.

“We were here before Katrina and we are thriving more now,” said Judy Longo, a United Methodist local pastor and director of the mission.

During the hurricane, several members of the church and the community died when Seashore’s building was destroyed, leaving just a slab.

A 6,500 square-foot building that was Bankston Paint Store has been transformed into new mission space. “We are here for a reason, God placed us in this building in this location for a reason. We are in a perfect place … we feed the body and the soul,” Longo said with a big grin. 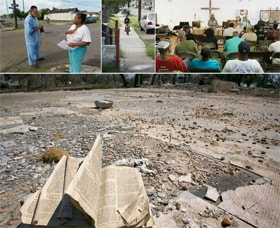 Broken places put back together

The only thing saved from St. Paul United Methodist Church in Pass Christian, Mississippi, after Katrina was a huge Bible that now has a place of prominence inside a glass enclosure in the entrance hall. The church is back, but for members like Janet Alexander, getting their own home put back together is still a dream.

“We owned two commercial fishing boats, my husband and me, and we were out there to the last minute trying to save the boats,” she recalled in hushed tones inside the restored church. “We got one around the back, but the other one we couldn’t move. We left it in harbor and it sunk.”

Both boats were totaled.

Alexander said she survived Hurricane Camille in 1969 but Katrina was worst.

“We lost a lot of people after, people we didn’t think would ever be sick, they just died. We lived in a FEMA trailer for about a year – myself, my husband, my daughter and her two kids and one son. All of us in that little tiny trailer. Seemed like you had to go outside for everything, too many people inside,” she said, smiling and shaking her head.

Alexander’s husband, a commercial fisherman for 40 years, died last April. “He went down after he couldn’t go fishing. He just didn’t want to do anything else, that was his livelihood. He lived on the water.”

But she said she has appreciated the work of volunteers, who “did us a wonderful service. It seems like they were here from day one.”

Gilbert and Bloom are United Methodist News Service multimedia reporters based in Nashville and New York. Contact them at [email protected].