Elizabeth Cumbest sings a song she wrote to help raise money for the reconstruction of Seashore United Methodist Assembly, a Mississippi church that was destroyed by Hurricane Katrina. With Bishop Hope Morgan Ward in the background, Cumbest sang during the 2008 United Methodist General Conference. Photo by Mike DuBose, UMNS.

United Methodists have been generous in their response to Hurricane Katrina relief-but more is needed.

During a "Katrina Report" on April 28 to delegates of the church's General Conference, Bishop William Oden of Dallas thanked church members for the $3 million raised so far for the Katrina Church Recovery Appeal, but he noted that "Katrina fatigue has set in." He called for a recommitment to the rebuilding and reconstruction of the U.S. Gulf Coast.

Established by the Council of Bishops, the Katrina Church Recovery Appeal is helping to restore hurricane-damaged United Methodist facilities; pay salaries for clergy while their congregations cannot do so; establish new congregations or consolidate existing ones; renew church-based community ministries such as day-care centers; and provide such worship necessities as Bibles and hymnals to churches in need.

More than 40 United Methodist churches were destroyed or severely damaged by Hurricanes Katrina and Rita in 2005.

Through the United Methodist Committee on Relief, church members raised more than $60 million for humanitarian aid to Katrina survivors, and that assistance is continuing. Bishop Hope Morgan Ward of Jackson, Miss., pointed out that 11,000 families in Mississippi had received help so far from the denomination.

She left a gift of "broken things" on the desks of delegates and asked them to pray with her to the God "who is the healer of hearts, restorer of communities and our strong hope."

The United Methodist Mississippi Annual (regional) Conference still receives 300 calls a week for assistance from Katrina survivors, according to Ward, and more than 7,000 families in the state continue to live in housing provided by the Federal Emergency Management Agency. 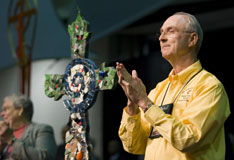 Standing beside a cross made from hurricane debris, Bishop William Hutchinson of Louisiana thanks United Methodists for their response.

Elizabeth Cumbest, a church member from Ocean Springs, Miss., performed a song for delegates that she wrote to help raise funds for the conference's Seashore United Methodist Assembly. About $45,000 has been raised so far.

Bishop William Hutchinson of Louisiana asked delegates for continued prayers, work teams and financial gifts for Katrina recovery. "The work is not finished," he said. "We continue to be in great need."

During a press conference following the report, Ward said her conference had received about $1 million so far from the Katrina Church Recovery Appeal to assist congregations with costs above insurance reimbursements. In Mississippi, 340 United Methodist churches had some damage, with 27 churches destroyed or badly damaged.

"Twenty-seven of our United Methodist clergy lived in FEMA housing for a year, some for two years," she added.

Mississippi churches fared better than their counterparts in Louisiana, according to Ward, because the water came in and out like a tsumani wave rather than a flood. The devastation in Louisiana has slowed the return to church buildings, and salary support for clergy remains a major need there, she said.

"One of the greatest unmet needs in Louisiana and Mississippi is insurance for our properties," she added. "Anything we build on the coast has very, very high property insurance."

Mollie Stewart, chairwoman of the board of trustees of Gulfside Assembly-a historic United Methodist retreat center in Waveland, Miss., destroyed by Katrina-spoke of plans to rebuild. Wood from the property was used to create the altar furniture at General Conference.

*Bloom is a United Methodist News Service writer based in New York.