A U.S. government program, despite its flaws, supplied a financial lifeline to hundreds of United Methodist ministries in the early days of the pandemic.

The federal Paycheck Protection Program for the first time offered federally guaranteed small-business loans to nonprofits with fewer than 500 employees, including churches.

The goal: To help employers keep workers on the payroll during coronavirus-related closures. Loans can be forgiven — essentially becoming grants — if employers show they used at least 60% of the funds on paying workers and meet other criteria.

The program has faced criticism for favoring larger enterprises over smaller ones and violating the U.S. legal tradition of separating church and state.

Nevertheless, many United Methodist leaders point to the program as a needed reprieve at a time of plummeting giving and rising ministry needs.

“Even though there are a lot of churches doing better right now, there are others that very clearly did not have to lay off significant numbers of staff because they were able to get a PPP loan,” said Scott Brewer, treasurer and director of administrative services for the Great Plains Conference.

The release of data came under pressure from the U.S. Congress and multiple media outlets. As of June 30, the program had distributed more than $500 billion.

UM News converted the SBA spreadsheet into a database to search for known United Methodist ministries. That spreadsheet included names and addresses of 661,218 recipients that received between $150,000 and $10 million. UM News searched for organizations with “United Methodist” in their name, annual conferences, seminaries, and church-supported historically Black colleges and universities.

The SBA reports that the loans overall supported more than 51 million jobs. Applicants were not required to report the number of jobs retained, and the spreadsheet marked many recipients as retaining zero jobs or left the space blank. So, the best UM News could get is an estimate for United Methodist jobs retained.

As always when dealing with large amounts of data, inaccuracies caused by human error may exist.

The Paycheck Protection Program is open through Aug. 8.

Here is a listing of United Methodist ministries included in the Small Business Administration data.

This month, the U.S. Small Business Administration — which administers the program — made public its large-dollar recipients, including various United Methodist ministries.

According to a UM News analysis of the administration’s data, at least 751 United Methodist organizations received between $150,000 and $5 million in loans.

The Small Business Administration lists the loans within a financial range rather than giving exact amounts. But based on those ranges, the 751 United Methodist ministries altogether received close to half a billion dollars in taxpayer-backed aid.

And with these loans, the ministries report that they kept tens of thousands of people on the payroll.

What these numbers do not include are churches that are affiliated with the denomination but do not use “United Methodist” in their name.

The UM News tally also does not include churches and other ministries that received less than $150,000. The Small Business Administration lists these recipients only by ZIP code.

Among the larger recipients was the United Methodist Church of the Resurrection, based in Leawood, Kansas. The denomination’s largest U.S. church in attendance was among 16 United Methodist organizations listed as receiving between $2 million and $5 million in loans.

“As an employer, the loan was an immediate relief because we faced economic and programmatic uncertainties unlike we’d seen in our church’s 30-year history,” said Dan Entwistle, the church’s senior executive director.

“Because our employees are exempt from state unemployment, keeping vulnerable staff members employed was particularly important.”

Entwistle said the church also was able to initiate new ministries even as in-person gatherings ceased.

Chapelwood United Methodist Church, a multi-campus megachurch in the Houston area, is another recipient of a loan in the $2 million to $5 million range.

Whitney Allen, the congregation’s communications director, said the loan allowed the church to retain all its teachers at its two schools even though the church stopped collecting tuition in March.

The loan also has enabled the church to have ministerial staff at Fair Haven Food Pantry, which the congregation serves in partnership with the Houston Food Bank. Since March 24, Allen said, Chapelwood has served more than 100,000 people with groceries and weekend food for children. 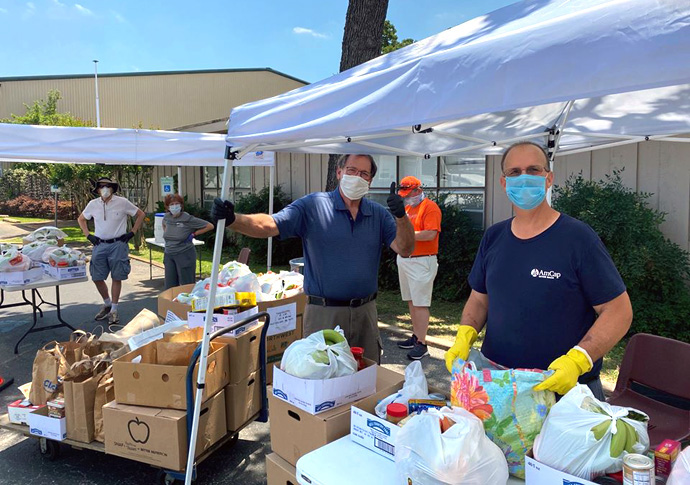 Grace United Methodist Church, a mid-sized congregation in Dallas, received a loan of $52,600 in late April.

“We continue to dip into our reserves every month, so the PPP funds have given us the ability to maintain ministries that otherwise may have had to be put on pause,” said Paul Ott, chair of the church’s administrative council. “Importantly, we have kept on all our staff, and that certainly furthers our ability to support those ministries.”

As soon as the loan program came online, the denomination’s General Council on Finance and Administration and Wespath, its pension agency, collaborated in providing information on how ministries could gain access to the funds.

The Council of Bishops and nine of the 10 United Methodist general agencies received loans through the Paycheck Protection Program. The United Methodist Board of Higher Education and Ministry opted not to apply.

The United Methodist Publishing House received a loan in the $2 million to $5 million range and United Methodist Women received a $1 million to $2 million loan. These two denomination-wide agencies do not receive general church funds.
GCFA’s board also authorized the denomination’s church-funded agencies to apply for loans. The finance agency itself received a nearly $2 million loan that covers its own staff and provides support for the Council of Bishops and the Commission on the General Conference. GCFA administers funding for both the bishops and the staff who help plan the denomination’s top lawmaking assembly.

Most United Methodist ministries rely to some extent on giving. Denomination-wide ministries such as general agencies and bishops receive apportionments from conferences, which in turn ask for apportionments — recommended giving — from local churches.

But with rising unemployment and economic uncertainty, many conferences placed a moratorium on apportionments from local churches.

While some local churches report giving has rebounded since the early days of the pandemic, that is not being seen at the conference or general church level.

“We are seeing significant declines in apportionment receipts since April of approximately 40-50% lower than previous years,” said Sharon Dean, GCFA’s communications director. “Based on that decline, we feel (the Paycheck Protection Program) is enabling the general church to maintain operations and ministries.”

She added that the decline in the apportionments is greater than the income from the federal loans.

United Methodist Communications, of which UM News is a part, received a loan of about $1.7 million. Danny Mai, the agency’s chief operations officer, said the funds have helped the agency continue to pay staff while also continuing local church grants. Churches use the grants for websites, videoconferencing and radio — tools that are increasingly critical as churchgoers shelter in place.

If anything, United Methodist educational institutions are in a more precarious financial position. As many sent students home for online classes, they also had to shut down student housing and food services that are sources of revenue.

“The way I see it is it’s allowed us to keep good people and see farther in the future to continue to pursue our mission,” said the Rev. David McAllister-Wilson, president of Wesley Theological Seminary in Washington. The seminary received a loan in the $1 million to $2 million range.

He added that he does not see the program as too much entanglement between church and government because it’s helping employees to continue paying payroll taxes to the government.

With its $1.4 million loan, Garrett-Evangelical Theological Seminary in Evanston, Illinois sustained not only faculty but also students on work-study and staff unable to work from home.

“Our students will continue to have the classes they need, but more than that, Garrett-Evangelical will remain a robust learning community driven by the principles of quality, liberative and equitable education,” Lallene J. Rector, the seminary’s president.

Cynthia Bond Hopson, executive of the Black College Fund at the United Methodist Board of Higher Education and Ministry, said the loans are sustaining schools through the summer even as they deal with revenue shortfalls.

“Black colleges are historically underfunded and the amazing work they do, in spite of that, turns out leaders who are visionary,” she said. “They serve students other schools might not.”

But with rising COVID-19 cases causing shutdowns again across the U.S., finances across the United Methodist connection remain a concern.

“Now we are onto the next iteration of the crisis,” said Brewer of the Great Plains Conference. He does not expect to see another Paycheck Protection Program again.

While acknowledging the start of a breakaway denomination, new Council of Bishops President Thomas Bickerton shared his hopes for a revived United Methodist Church. Among those leaving for the new denomination is a fellow bishop.
Bishops