Even as new immigrants from the Middle East and Africa struggle to find a place in German society, many from Ghana and Vietnam have been here for decades. Those who are United Methodist mostly worship in their own language at their own churches. 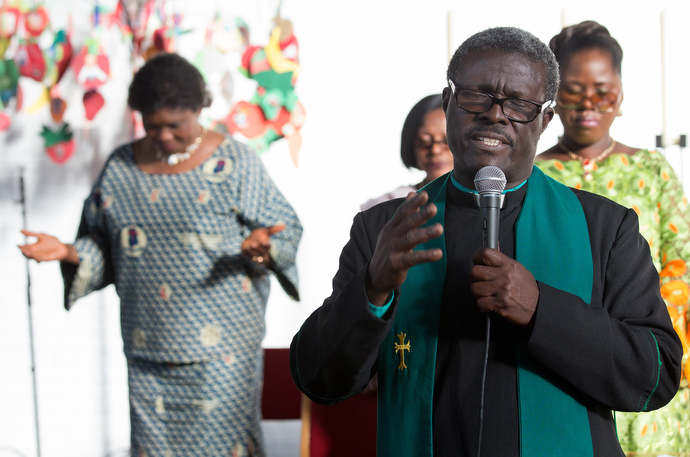 Augustina Kortetey came to Germany from Ghana in 1996 with her husband, Eric, who was a guest worker. “Church is a home away from Ghana,” she said. “I see all the church members here every Sunday. I love the music and love to dance.”

She was among worshippers dancing in the aisles of the Ebenezer Church, one of three United Methodist churches in Hamburg. Their colorful clothing and the lively music, as well as the worship in a mix of Twi (a common language in Ghana) and English, provides a warm contrast to the stately church building the group rents from the Evangelical Church, the state church of Germany.

The choir processes into the sanctuary at Ebenezer United Methodist Church, a Ghanaian congregation in Hamburg, Germany.

The Rev. Aaron Gaisie-Amoah was sent to Germany by the Methodist bishop in Ghana to be the pastor for the three Ghanaian churches in Hamburg — Calvary, Ebenezer and Wesley. He will stay six years, when another pastor will be sent from Ghana. Ebenezer is “purely a Ghanaian church,” he said.

While the first generation of Ghanaian immigrants is looking for familiar language and surroundings, Gaisie-Amoah said things are “not easy for the children.

Members of the congregation sing during worship at Ebenezer United Methodist Church.

Others don’t see a problem. Eunice Asabere has three children ages 9, 12 and 15. She said they all love to come to church.

The Rev. Irene Kraft, district superintendent for the Hamburg Circuit, said a further complication is that the Ghanaian churches continually receive new members from Ghana, who are looking for a place to feel at home in their language and culture.

“Therefore it is not a process of cultural integration and at some point, those integrated and speaking German will form the majority and take over responsibility anyway,” she said.

Journey to pulpit began in peril

The Rev. Chi My Nguyen’s quest to become the only Vietnamese United Methodist pastor in Germany began with great danger. Read the moving story of Nguyen’s journey from the Reutlingen School of Theology to his first church outside Frankfurt.

She recalled a discussion during a charge conference when one group of parents argued that their children speak German and if they are to become faithful Christians and members of the church community, they must be made to feel welcome in their first language — German.

“Another group insisted that Ghanaian identity, culture, tradition and language need to be preserved and passed on to the next generation, specifically while living far away from Ghana,” she said. That group argued services should continue with Ghanaian liturgy and only Twi and English. “They have high expectations that young people accept this and attend. Finding a way forward is a real big challenge.”

German Area Bishop Harald Rückert agrees the situation is challenging, but notes native Germans and immigrants worship together in more and more churches. In addition to the 10 Ghanaian congregations, Germany has a Vietnamese United Methodist church, a Farsi-speaking congregation and seven international churches where the primary language is English.

“I personally believe it is changing. Especially those who live in Germany for a longer time, the next generation, the younger people, they really want to connect more with the German church,” he said.

But Rückert understands how the first-generation immigrants feel about their churches and language.

“Language is culture, language is home,” he said.

He spoke of doing a pulpit exchange for three months with a church in the United States.

“Praying in English is very strange, but to pray in German, my mother tongue, that comes from our heart,” he said. “We have to very carefully look at the real situation in those congregations. We would like to encourage the young people if they really want to integrate. We should give them the support they need.”

The Vietnamese church in Frankfurt faces the same challenge. The Rev. Chi My Nguyen, who graduated from Reutlingen School of Theology in 1995 and is the only Vietnamese United Methodist pastor in Germany, leads the Hoi Thanh Tin-Lành Giam Ly Church, or Gospel United Methodist Church, which has about 40 members.

Nguyen said the Vietnamese population is fluid in Frankfurt, as people often move to another city or go home to Vietnam. Many members live quite far from the church, so members also attend house churches in their neighborhoods. “The goal is to have groups and church. There are about 20 house churches,” he said. 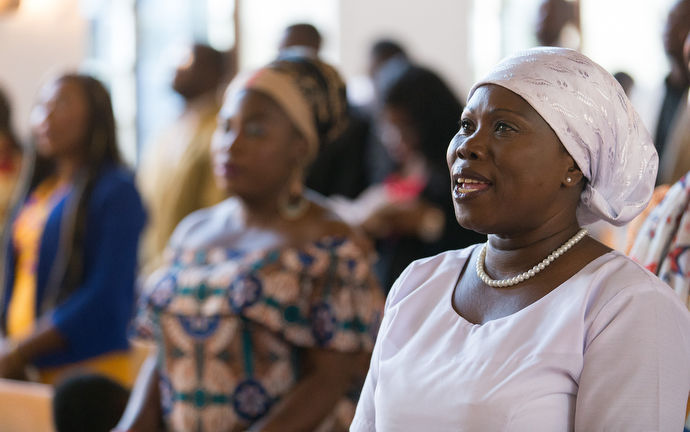 Members of the congregation sing during worship at Ebenezer United Methodist Church.

He agrees that children and youth often don’t speak Vietnamese, so how to include the younger generation will be an increasing problem. He said the youth work is done with both his church and the United Methodist Church-Frankfurt City, the church where the Vietnamese church is housed. The youth services are in German.

The Rev. George Miller, coordinator for International and Migrant Ministries for the United Methodist Board of Global Ministries, said the Vietnamese are one of the best-assimilated group of migrants in Europe. “They are well-educated; their children go to general schools,” Miller said.

Members of the congregation sing during worship at Calvary United Methodist Church.

He said the migrant model in Germany has been a separate church and adds that “there hasn’t really been a good integration effort.”

“It takes a strategic will and persistence at all levels of the church to become reconciled and be in unity,” Miller said. “Where the more recent migration waves have created church openness, along with the German identity of second-generation youth, we are now seeing new models of diversity and intercultural church.”

Before the reunification of North and South Vietnam, there were few Vietnamese in Germany, but after the fall of South Vietnam, the “boat people” began arriving as refugees in Germany in 1975. The second wave of Vietnamese immigrants came as guest workers, mostly to the German Democratic Republic, or East Germany, before the reunification of East and West Germany.

Most Ghanaians arrived from the 1970s to 1990s, many coming as guest workers. At that time, Germany had relatively liberal asylum and work authorization procedures. The number of Ghanaians entering the country dropped significantly after a more restrictive migration policy was put in place in 1993.

Ghanaians maintain strong ties to their homeland in Africa. Wesley United Methodist Church, the smallest of the three churches in the Ghanaian circuit, has sent $20,000 to a school in Ghana since 2014.

Comfort Asiamah Reinhardt, the church’s steward, said the money has been used to build three classrooms, a library and an office.

Many Ghanaians return home to stay at some point, too.

Gladys Fosa said she has been in Germany for 40 years, but her husband has gone back to Ghana. “My children are all German citizens and they won’t go back to Ghana. I don’t know if I ever will.”

As record numbers of migrants continue to cross Mexico’s southern border, the Methodist Church of Mexico is seeking new ways to be in ministry with immigrant families on the move. UM News accompanied church leaders and longtime partners as they sought ways to help. Mike DuBose reports.
General Church