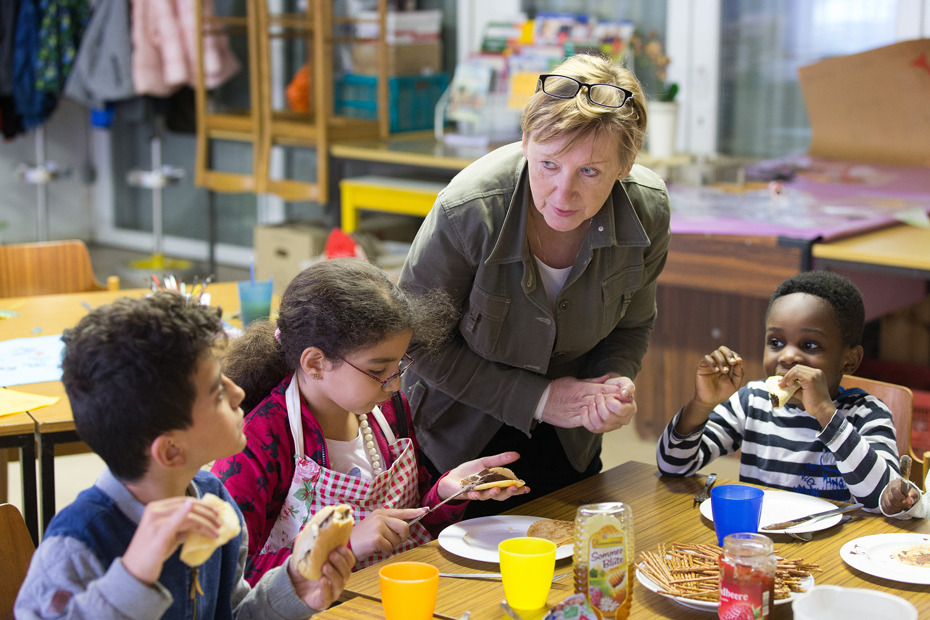 Kuscha Alipoor took sanctuary at the United Methodist church here for three months while he fought deportation in 2013.

Now, the Iranian is a member of the church who works as the janitor and is renovating the church-owned apartment where his family lives.

Along the way, his marriage ended and he lost his company and his homeland. But he has no regrets.

“I am happy because I have rights, I am in a very safe country,” said Alipoor, who said he was persecuted for his Christian faith. “I can be a clean man here. I don’t have to lie about anything.” 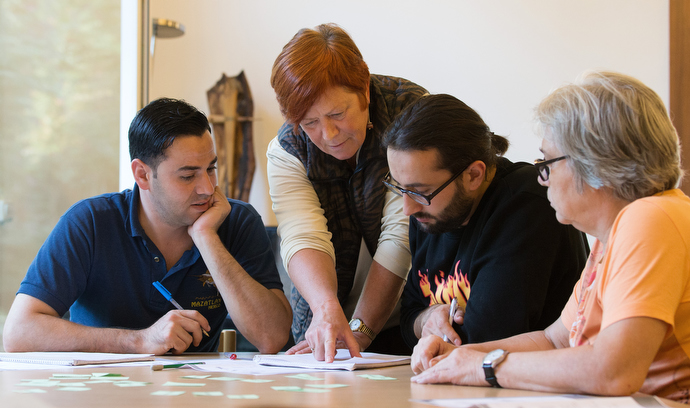 Uta Dauner Eisbrenner helps Muhammad Mshehadat (left) and Maker Araksousi with a vocabulary exercise during a German class for recent immigrants at the United Methodist Church of the Caller in Frankfurt, Germany. Helping, at right is volunteer Christa Shweitzer.

Alipoor is one of four people given sanctuary at Erlöserkirche Evangelisch-methodistische Kirche (United Methodist Church of the Redeemer) amid a wave of refugees and migrants fleeing war, persecution, poverty and other humanitarian crises in the Middle East and Africa. As of 2016, about 1.6 million foreign-born people had registered in Germany asking for protection as refugees. Most of those came in 2014 and 2015.

Germany Area Bishop Harald Rückert said many United Methodist churches in the country work with migrants or refugees, although not all.

“Many just open the door and say, ‘Here we are, if there is help needed, we provide food, we provide a place where they can meet,’” the bishop said. “There’s a much smaller group that are trying to do a little bit more, not only to help, but to try to speak to politicians, to try to force our officials not only to help, but to change policies. And that’s a very huge task and a complex task.” 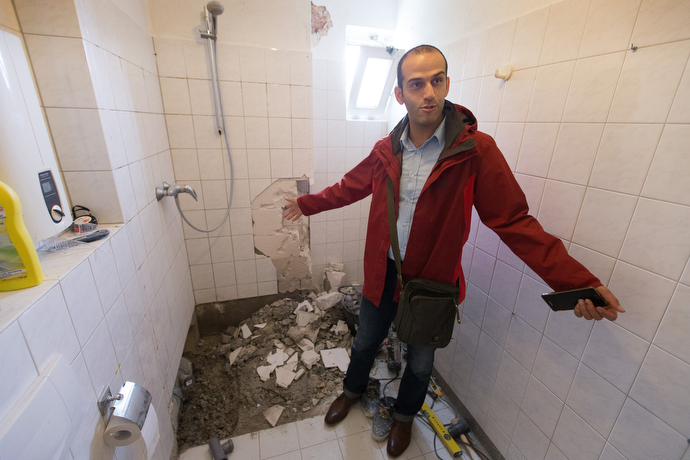 Kuscha Alipoor shows the bathroom he is renovating in his family's apartment at the United Methodist Church of the Redeemer in Bremen, Germany. Alipoor, who took sanctuary at the church, while fighting deportation, is now a member of the church and works as the building superintendent.

He believes the work has changed the 51,000-member Germany United Methodist Church.

“It is not that the church is growing in every place that opened their doors, but many have seen that they are meaningful,” Rückert explained.

Germany was a major destination for immigrants even before the open door policy of 2015. But the face of immigration in Germany — where about one in five are first- or second-generation immigrants with at least one parent born without German citizenship — is complex. 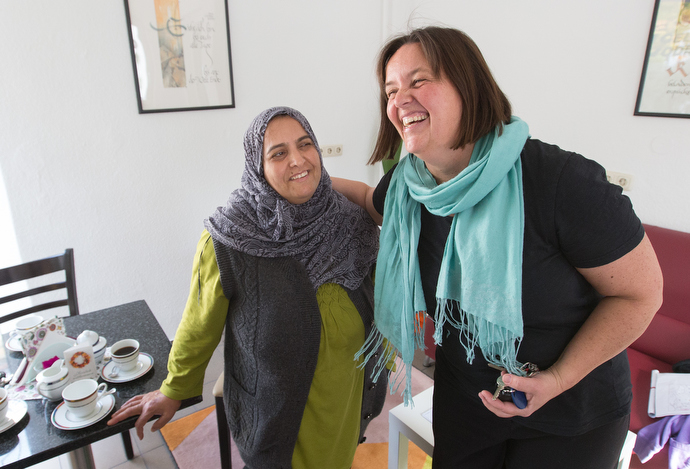 The Rev. Heike Miller (right) introduces Sahize, a recent immigrant from Syria, at Cafe Gegenueber, a weekly gathering for coffee, cake and conversation at the United Methodist Church in Lorsbach, Germany.

Many Vietnamese, Ghanaians and immigrants from other European countries came as guest workers before the fall of the Berlin Wall and the reunification of Germany. After World War II, an estimated 12 million ethnic Germans who were expelled from former German territories were viewed as immigrants in Germany.

Some immigrants are entrenched in the German culture, while others have maintained their own ethnic communities, said the Rev. George Miller, coordinator for International and Migrant Ministries for the United Methodist Board of Global Ministries.

He believes migrants and refugees offer big potential for revitalizing the church with “Europe as a mission field. 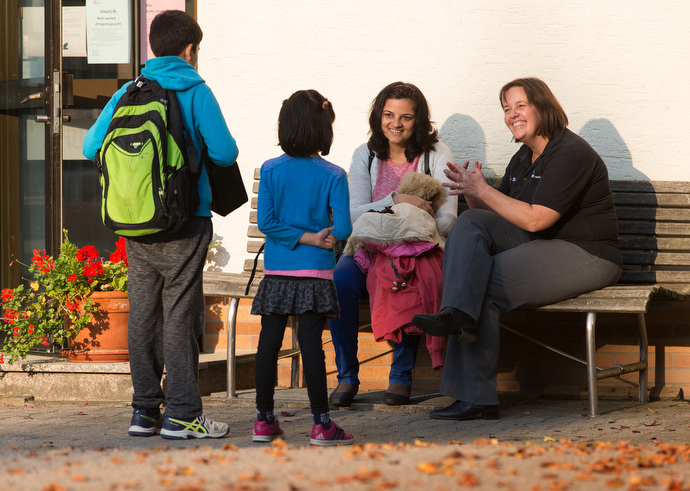 The Rev. Heike Miller (right) visits with Ruchi Shukla and her children Mohit (left) and Kayna outside the United Methodist Church of the Caller in Frankfurt, Germany. The family, recently arrived from India, was attending a German class offered by the church.

“This intercultural migrant ministry has been a good news story for our church. Where we have embraced diversity we see wonderful new forms of abundant life created.” Miller facilitates Leadership Training Seminars for migrant and international leaders and their German counterparts.

There is a personal touch, too. Some church members attend interviews and meetings with refugees or migrants to help them navigate the bureaucracy.

Uta Dauner Eisbrenner, a member of the Ruferkirche (United Methodist Church of the Caller) in Frankfurt, is advising a Ghanian woman who has been in Germany about eight years, but got into difficulties concerning the education of her children and must now deal with the German youth department.

“I accompany her, helping her translating, telling her what they meant. There are a lot of misunderstandings also because of the different cultural background,” said Eisbrenner, who also teaches German classes at the church.

To receive refugee status, a person must come from a place that qualifies them as a refugee — Afghanistan, Syria, Iraq, Eritrea, Ethiopia and Somalia, to name a few — and be able to prove they are escaping war or persecution, Miller said.

In both Bremen and Hamburg, United Methodist churches offer a variety of programs, including field trips that help immigrants learn about the community and the country.

The Rev. Karsten Mohr, pastor of Friedenskirche (United Methodist Peace Church) in Hamburg, which runs an education enrichment program for mostly immigrant children, said one aspect of the program is showing students around and helping them “be a part of the society and the city.”

The Bremen church does offer sanctuary to some and has about 10 other programs that involve refugees or migrants, including monthly field trips to such places as museums, kayaking and pilgrimage walks. 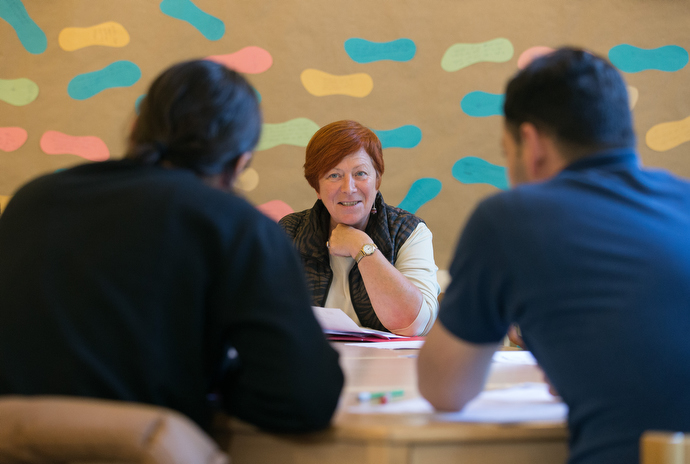 Uta Dauner Eisbrenner leads a German class for recent immigrants at the United Methodist Church of the Caller in Frankfurt, Germany.

About half of the recent refugees to Germany are Christians, but many of the rest are Muslims who are unlikely to join a United Methodist church. The work can still revive the churches.

Mohr noted that the Hamburg church was down to about 30 members when the children’s program began and now it has about 60 members, with 30-35 attending each Sunday. Four out of five youth in the church are refugees.

“If we only serve the Germans, we will die,” Mohr said. 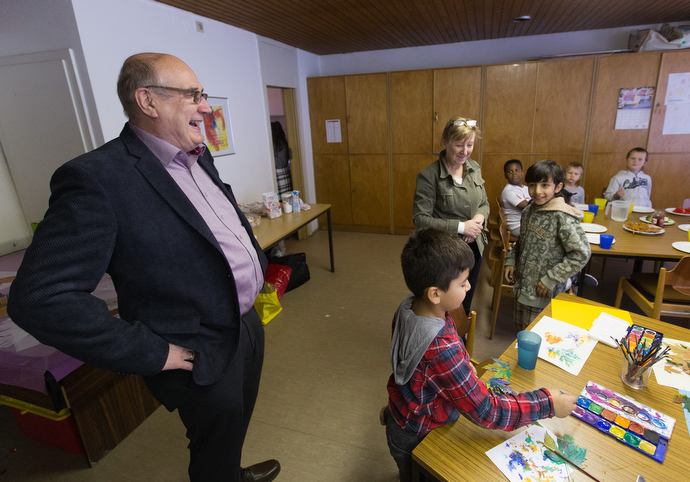 The Rev. Karsten Mohr (left) visits with immigrant children in an educational enrichment program at the United Methodist Peace Church in Hamburg, Germany. 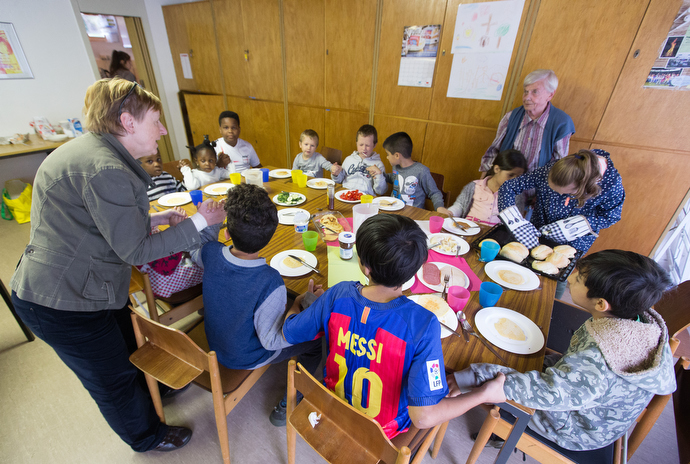 Immigrant children pray before a meal during an educational enrichment program at the United Methodist Peace Church in Hamburg, Germany.

Immigrants do attend worship with the German members in some churches, said the Rev. Heike Miller, pastor of a two-point charge.

“I believe God has blessed his Body of Christ with such a diversity of people pouring into the German country and challenging a small minority of Methodists to step up and define their call and purpose in a brand new way.”

One of her churches, in her district, the Ruferkirche in Frankfurt has 35 to 40 in attendance — 20 percent migrants or refugees — and a key has been its apprenticeship site for five Global Mission Fellows from five different African countries for the last two years. While still small, it has shown substantial growth in the last few years. 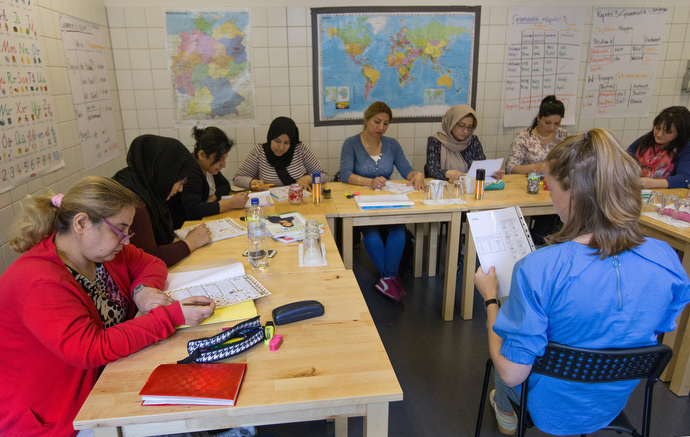 The other, the 12-member Lorsbacher Gemeinde (Lorsbach United Methodist Church) of the Frankfurt Rufer Circuit, runs a community café that raises money for an education program in Northern Ghana to help women earn a living there rather than migrating. The café has transformed the village and its relationship with the Methodist Church, Miller said.

While many refugees helped by United Methodist churches remain Muslim, Alipoor and others fled because of their Christian faith.

Global Migration Sunday is Dec. 3, the first Sunday of Advent. The day of prayer and special offering is aimed at raising awareness and funds to aid migrants and refugees.

Alipoor had learned about Christianity through students of his wife, who was a professor in Iran.

“It was difficult to win the trust of Christians, since it was dangerous for them to invite you to join a service,” he said.

But he persisted and started attending a house church. About six months before he fled Iran, he was arrested and beaten until he promised to return to the mosque. “I was officially a Muslim and it was illegal to change my religion to Christianity,” he explained.

One day, a friend called to warn him that police had raided the church. Alipoor, who had been a Sunni Muslim before becoming a Christian, lives with the guilt that it may have been his uncle, a mullah (Islamic leader or teacher), who reported the church.

He applied for a tourist visa to Poland, where he said he was going to celebrate Christmas, then went to Germany.

Because he owned a business and his wife had a good job, Alipoor believes the Polish Embassy in Iran thought he would return. But under the Dublin rule, refugees have to apply for asylum in the country where they first set foot in Europe, so Germany moved to deport Alipoor to Poland.

The Rev. Susanne Nießner-Brose, pastor of the Bremen church, offered Alipoor sanctuary. His application for refugee status — allowing him to stay and work in Germany for three years — was eventually approved. 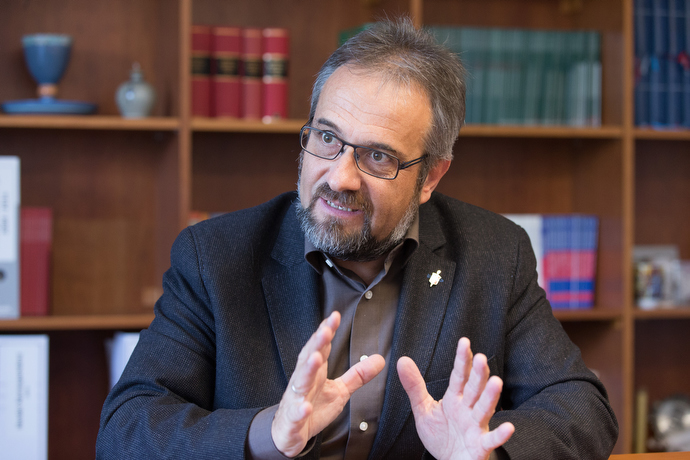 Alipoor’s marriage ended, he said, because his wife didn’t want to become a refugee in Germany. He has since married a Lithuanian woman he met in a German class. They have a baby daughter.

Active in the church council, Alipoor recently represented the church at an ecumenical meeting about unity in Rome. “Some of our church council believes he would make an excellent pastor,” Nießner-Brose said. 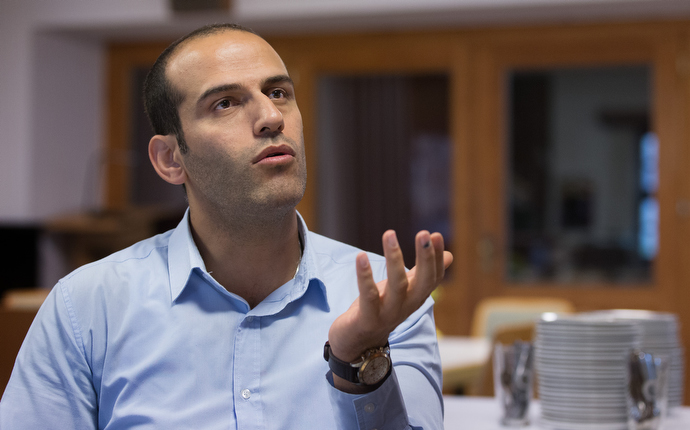 Kuscha Alipoor is one of four people who have taken sanctuary at the United Methodist Church of the Redeemer in Bremen, Germany. Alipoor, from Iran, now works as the church superintendent. “I am happy because I have rights, I am in a very safe country,” he said.

Read the second story in our series on the church in Germany, Bremen church embraces refugees, migrants.
Read our story on the impact of this special offering, Global Migration Sunday shines light on a crisis.

Even as they grieve the deaths of at least 50 migrants in San Antonio, United Methodists are continuing to care for immigrants and address what drives people to such peril.
Immigration