The Rev. Chi My Nguyen’s journey to become the only Vietnamese United Methodist pastor in Germany began in peril.

Nguyen and his wife almost died when they fled Vietnam by boat in 1982.

He had become a Christian in 1979 and wanted to have the freedom to practice his faith, as well as better opportunities for his family.

The fishermen they paid for the trip out of Vietnam robbed them and assaulted his wife, Nguyen said. A storm threatened the boat. Before it sank, a German ship rescued the refugees.

Nguyen studied theology at Reutlingen School of Theology, where he learned about The United Methodist Church. His first church was a village church outside Frankfurt, with mostly elderly members. He said he loved the pastoral care work that was the bulk of his work there.

“We are here 10 years, but we only have 40 people. We want to reach more for Christ,” Nguyen said. 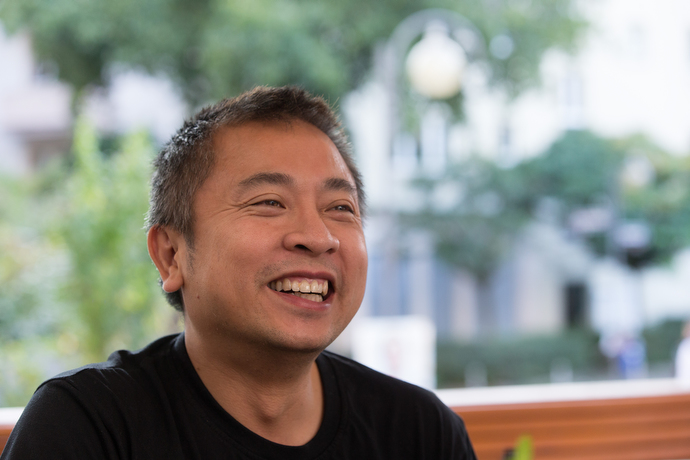 Nguyen Trung Dung was a Buddhist in his native Vietnam. He was guest worker in East Germany who climbed the Berlin Wall to seek asylum and his since become a Christian. He worships at Tin-Lanh United Methodist Church in Frankfurt, Germany. "I have new brothers and sisters in the church,” he said. Photo by Mike DuBose, UMNS.

Nguyen ran a restaurant during the time he was a part-time pastor, but he recently sold it because he began a full-time appointment in September serving both Tin-Lành and a German church. Building the Vietnamese church has been a slow process, with Nguyen meeting people on the street, visiting their homes, inviting them to church.

He struggles with the question of one day returning to Vietnam. “If it is the will of God, I would go back,” he said. But he loves his work in Germany and doesn’t really want to go back.

About 40 people belong to the church. Members also meet in 20 house churches for study and fellowship in the neighborhoods where they live. Most of the members live a distance away from the central area of Frankfurt where the church is.

“The goal is to have groups, churches, so that everyone has two meetings a week,” Nguyen said.

Many Vietnamese refugees to Europe settled in France, but a second wave of Vietnamese immigration came from guest workers in East Germany.

Nguyen Trung Dung, a member of Tin-Lành, was a guest worker in East Germany who climbed the Berlin Wall to seek asylum. “At that time they didn’t shoot people, they would have just sent me back to Vietnam,” he said. He owns the Shisankaitan Sushi Restaurant in Frankfurt.

“He’s a boat person, I’m a wall person,” he jokes, pointing to his pastor.

He was a Buddhist brought to The United Methodist Church by an aunt of his former wife.

“I feel the family atmosphere at the church. Sometimes I felt so lonely before I became a Christian. I have never known this atmosphere before, I have new brothers and sisters in the church,” he said. “We talk about what’s going on, what work is like, my family.”

Now a citizen of Germany, he voted for the first time in recent national elections, casting a ballot for Chancellor Angela Merkel, of whom he said, “I think she obeys God.”