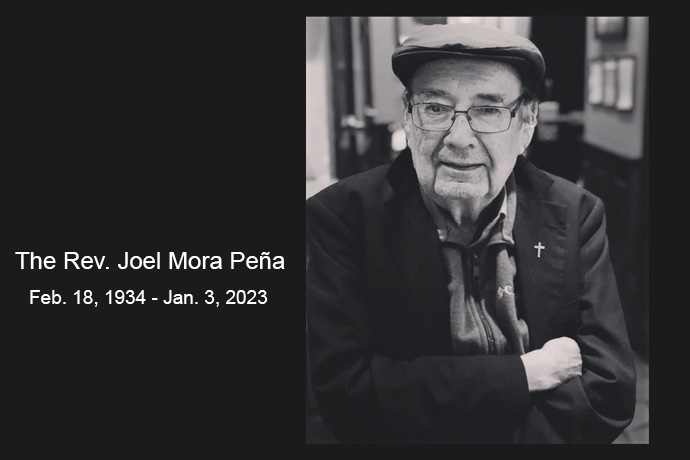 The Rev. Joel Mora Peña had a unique ministry trajectory, serving as a bishop in the Methodist Church of Mexico, then as a pastor in the Rio Grande Conference of The United Methodist Church. He died Jan. 3, at age 88. Photo courtesy of Meliza Gómez.

The Rev. Joel Mora Peña was a groundbreaking bishop in the Methodist Church of Mexico, serving from 1974 to 1982 and becoming the first to provide focused leadership in the northern area of his country.

Term limited as an episcopal leader in Mexico, and still in middle age, he immigrated to the United States and spent many years leading churches in what was then the Rio Grande Conference of The United Methodist Church.

That ministry trajectory was then — and remains — unique. 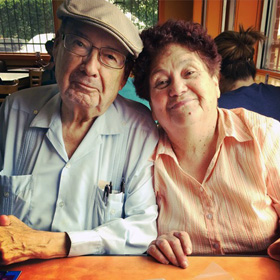 The Rev. Joel Mora Peña poses with his wife, Hilda Mora Sanchez. Mora Peña, who was a bishop in the Methodist Church of Mexico before immigrating to the U.S. and becoming an elder in The United Methodist Church, died on Jan. 3, at age 88. Photo courtesy of Meliza Gómez.

Martinez, brother-in-law to Mora Peña, considers it notable that the death occurred in the 150thanniversary of the establishment of a Methodist mission in Mexico.

“Joel Mora Peña is a historic figure in the long journey of Methodism in his homeland, and through his coming to the States,” Martinez said. “We were recipients of the abundant harvest that resulted from Methodism’s fruitful planting in Mexico beginning in 1873.”

Mora Peña was born Feb. 18, 1934, in Camargo, Mexico, to the Rev. Josue L. Mora (a Methodist Church of Mexico pastor) and Amada Peña. He spent his childhood in Torreón and Saltillo, in the Mexican state of Coahuila.

After studying theology at an Assemblies of God institute in Matamoras, Mexico, Mora Peña began to serve Methodist Church of Mexico congregations. For six years, he led El Mesias, a church in Monterrey.

Mora Peña spent four years as a superintendent for churches in the Mexican states of Nuevo Leon, Coahuila and Tamaulipas. then was elected bishop in 1974.

Before that year, the Methodist Church of Mexico had always had just one bishop. But leaders created a second episcopal area, and Mora Peña was the first to oversee the northern Mexico area.

Though it wasn’t the whole country, it was still a vast territory, stretching across several states. And the number of Methodists in Mexico was on the rise.

“He felt very blessed to be a part of the growing of the church,” Martinez said.

The Rev. Edgar Avitia Legarda said Mora Peña as bishop had a key role in the founding of Seminario Metodista Juan Wesley (John Wesley Seminary) in Monterrey and worked to ease tensions between Mexican Methodists who were charismatic in their worship and those who were more traditional.

“He brought a lot of peace and reconciliation. That was very characteristic of him,” said Avitia Legarda, who oversees the Global Mission Relationships unit of the United Methodist Board of Global Ministries.

When term limits took him out of the episcopacy, Mora Peña became international coordinator of the organization Explosive Evangelism, with responsibilities for Mexico, Central America and the Caribbean.

But after four years, he and his family immigrated to the United States, where many others in his family had already relocated. He joined the Rio Grande Conference, which included all Hispanic congregations in Texas and New Mexico. (The Rio Grande and Southwest Texas conferences became the Rio Texas Conference in 2015.)

From 1986 to 1989, Mora Peña led Wesley United Methodist Church in El Paso, and Avitia Legarda was one of his successor pastors there.

“People remembered him with so much love and respect,” he said.

Mora Peña would go on to lead United Methodist churches in the Texas cities of Brownsville, Laredo and Houston. Even after he officially retired in 2004, he continued to serve Rio Grande Conference churches for another decade.

Martinez would for a few years, as leader of the San Antonio episcopal area, be his bishop as well as his brother-in-law.

“I knew him to be a beloved pastor everywhere he served,” Martinez said. “And he was a winsome preacher. People enjoyed his preaching very much.”

Other survivors include his sister, Raquel Mora Martinez, who is the wife of Bishop Martinez and a leading figure in Hispanic Methodist music, and brothers Arnoldo Mora Peña and the Rev. Josue Mora Peña.

“I focused on God’s work of grace in Bishop Mora’s ministry in Mexico and in the U.S.,” he said. “When his granddaughter, Nilda Meliza Gomez, led us in singing ‘Amazing Grace,’ I thought, ‘So he lived and so we sing. Gracias a Dios!’”

Over the past 12 months, United Methodists have marked the passing of a storied NFL coach, the denomination’s first Asian American bishop and a pastor named Bible.
Bishops

Jurisdictions advised to elect 14 US bishops

Faced with denominational uncertainties, jurisdictional leaders are recommending United Methodists elect fewer U.S. bishops than there will be vacancies. But after a special session of the Northeastern Jurisdiction, all five U.S. jurisdictions expect to hold episcopal elections in November.