When it comes to the One Church Plan, advocates for LGBTQ equality in The United Methodist Church don’t necessarily see as one.

Those differences were on display during the July 26-29 “For Everyone Born” convocation, which drew some 325 LGBTQ United Methodists and their allies to St. Louis.

The Love Your Neighbor Coalition, which sponsored the gathering, includes unofficial advocacy groups as well as official United Methodist racial and ethnic caucuses. Most of the participants came from across the United States, with a few from the Philippines and African nations.

The convocation was a time of worship, Bible study and strategizing for the 2019 special General Conference, which aims to move the denomination past longtime divisions over homosexuality.

Among other petitions, the 864 delegates will receive a report from the Commission on a Way Forward, which details three possibilities for the denomination’s future including the One Church Plan.

To some at the convocation, the plan offers needed progress for their ministry. Still others see the plan as perpetuating discrimination.

Randy Canady said that under the plan his South Georgia congregation likely can start holding weddings again — this time for both straight and gay couples.

“It would mean we are able to continue the work we are doing now with a continued positive way forward,” said Canady, church and facilities administrator at Asbury Memorial United Methodist Church in Savannah, Georgia. The church, which averages more than 270 in attendance, has not hosted any weddings at all for more than three years. The church took the stance in solidarity with its LGBTQ members.

The Rev. Jay Williams, however, offered a different view during a sermon. As an African-American gay man, he said he is deeply suspicious of compromise — referencing the mandated racial segregation included in the compromise that formed the Methodist Church in 1939.

“We must be suspicious of the One Church Plan because it basically sanctions segregation in the church,” preached Williams, pastor of Union United Methodist Church in Boston.

The One Church Plan, which a majority of bishops recommend, would leave decisions to allow same-gender weddings up to churches and gay ordination up to annual conferences. The plan also would remove the statement — in the denomination’s Book of Discipline since 1972 — that the practice of homosexuality “is incompatible with Christian teaching.”

The plan adds protections for clergy and bishops who as a matter of conscience feel they can’t officiate at such unions or ordinations. The plan also lets central conferences — church regions in Africa, Europe and the Philippines — maintain current prohibitions. It’s these additional assurances that many see as continuing harm against LGBTQ individuals.

While mixed on the One Church Plan, the advocates stand united against the Traditional Plan. The legislation would add measures aimed at greater accountability, including pushing out congregations and conferences into their own Methodist denominations if they won’t pledge to abide by church rules on homosexuality.

The Rev. Brian Atkins, one of three openly gay members of the Way Forward Commission, told those gathered that commission members frequently remarked that no matter what they did, some would leave the denomination.

“I kept reminding commission members that no matter what we do, some people are going to stay because some of us feel a prophetic call to be here,” he said.

“If the Traditional Plan were to pass, GCFA (the General Council on Finance and Administration) would spend all its time in copyright infringement lawsuits because when you are told you can’t call yourself United Methodist or use the cross and flame, I think there will be defiance.”

A frequent message throughout the convocation was not to abandon The United Methodist Church despite the difficulties LGBTQ members have frequently faced.

Over the decades, General Conference voters have added more restrictions related to homosexuality to the denomination’s Discipline. Presently, clergy can face charges under church law for officiating at same-gender weddings or being “self-avowed practicing” homosexuals.

One of the convocation’s preachers, the Rev. David Meredith, has a case heading to Judicial Council, the denomination’s top court, this fall.

However, in recent years, boards of ordained ministry, clergy and annual conference voters — particularly in the Western and Northeastern jurisdictions — have publicly and increasingly defied these prohibitions with few repercussions.

Both Dave Nuckols, a commission member and General Conference delegate from Minnesota, and Dorothee Benz, delegate from New York, separately told those gathered that these acts of disobedience helped create the pressure that made the commission possible.

“We had no power to change the system within its prescribed rules and procedures, but we do have the power of our moral agency,” Benz said in a presentation by video phone. “And we chose to exercise that power.”

While expressing deep misgivings about parts of the One Church Plan, she stressed other parts — especially the removal of the “incompatible” language — contain “the necessary first steps for justice.” 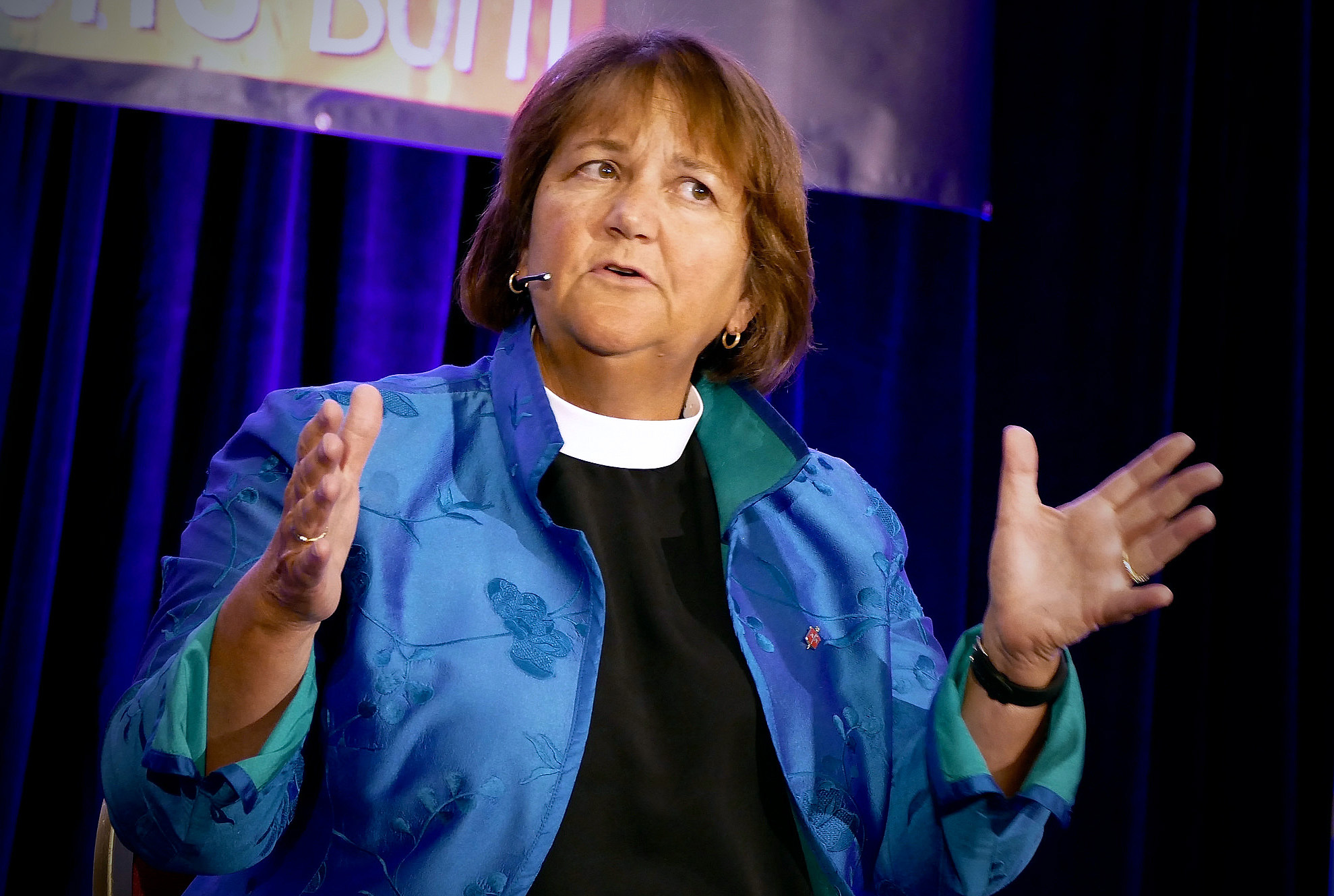 United Methodist Bishop Karen Oliveto, the denomination’s first openly gay bishop, speaks during a question and answer session at For Everyone Born in St. Louis. Photo by Stephen Drachler.

The Love Your Neighbor Coalition has not endorsed a specific plan for a way forward. However, in the booklet for the event, the group urges General Conference delegates to maintain the United Methodist connection and remove all “forms of language that discriminates against LGBTQ persons” from the Discipline.

The United Methodist Queer Clergy Caucus, part of the coalition, has submitted legislation that removes the Discipline’s prohibitions related to homosexuality without adding new provisions. The caucus call its legislation a Simple Plan.

Williams, the pastor in Boston, is among the leaders of that caucus, which now has some 200 members.

But because of regional variations in enforcement, not all gay United Methodist clergy in the denomination are out, said Laura Young, regional organizer for Reconciling Ministries Network.

Young, a deaconess who works in the denomination’s South Central Jurisdiction, recounted what a gay, closeted clergy member told her. The clergy member, Young said, understands the desire to push for justice for all and dismiss half measures. But many of those pushing live in areas where they can minister without reprisals.

“‘They are fighting for the cherry on top of the sundae,’” Young recalled the clergy member saying. “‘I need you to get me just the ice cream. I need the ice cream to have the energy and the life to fight another day.’”

The Rev. Beth LaRocca-Pitts, senior pastor of Saint Mark United Methodist Church in Atlanta and a reserve General Conference delegate, said she and other advocates are looking to back whatever plan that can be successful in curtailing discrimination.

Bishop Karen Oliveto, elected and consecrated in the Western Jurisdiction as the denomination’s first openly gay bishop, offered a word of advice as United Methodists head toward the special General Conference.

“I think we need to accomplish what God needs us to do,” she said. “We’ve all got to lay down our arms, and we’ve got to let the Holy Spirit lead us.”

Church members react to the three published plans for the future proposed by the Commission on a Way Forward.
Social Concerns

Group uses meeting to talk up One Church Plan and find a way to get it passed at special General Conference.

Evangelical group plans for what’s next

Leaders of the Wesleyan Covenant Association leave open the possibility of a church split. But no matter what happens, group leaders say they’ll be prepared.