When busloads of asylum seekers started rolling into Manhattan in August, the United Methodist Church of St. Paul and St. Andrew turned to an established network with other groups in crafting a response.

One of the immediate needs of the arriving migrants — then allowed into the U.S. to make asylum claims — was clear. An over capacity in New York City’s shelter system meant that many had no immediate place to stay, said the Rev. Lea Matthews, associate pastor.

After the staff did a quick building audit and decided that the church could provide a small shelter, five men from Venezuela were assigned to stay there. “In a matter of four hours, we had a functioning sanctuary space,” she said.

The congregation’s Advent theme this year — embodying Advent through hope, love, joy and peace — is playing out through its expanding migrant ministry.

Any church can contribute to this type of ministry. “There are new arrivals in almost every community,” said the Rev. K Karpen, senior pastor at St. Paul and St. Andrew. “They need to feel a Christian welcome.” 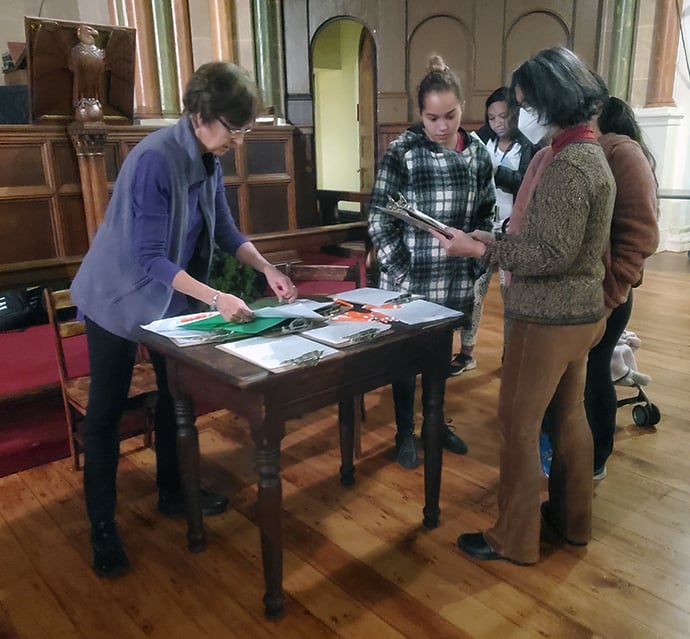 St. Paul and St. Andrew church members Karen Collins, left, and Rosangela Oliveira, right, offer forms to asylum seekers to complete so they can register for services provided by the West Side Campaign Against Hunger. Photo by K Karpen.

Junior, one of the Venezuelans living at the church, knows there are obstacles to his goal of bringing his family to the U.S. “I hope to solve my problems if I receive help with my documents,” he said through a translator.

In the meantime, he is grateful to have a support system. “I thank God to have known all these people,” he said, referring to the connections established through St. Paul and St. Andrew. “They have helped me so much.”

Sometimes you have to think small to make an impact.

While the Church of St. Paul and St. Andrew could not meet a major need like shelter for dozens of the asylum seekers entering New York, “we could offer them a Metrocard (for public transportation) and some cash and some shelf-stable snack foods, essential things,” the Rev. Lea Matthews said.

A small gesture can be meaningful for people who need everything, added the Rev. K Karpen. “Even something that seems little to us can make a huge difference” …

The migrant response is an outgrowth of the congregation’s decision in 2017 to join a movement of churches committed to immigrant rights and justice. The following year, St. Paul and St. Andrew took in a family threatened by deportation, a sanctuary situation that ended 15 months later with a legal reprieve.

This situation is different. The arriving migrants hoping to win asylum are facing a process that takes upward of six to eight years, Matthews pointed out, with the caseloads for immigration lawyers in New York way over capacity and court systems backed up. It’s difficult, she added, to explain the details “to people who are disoriented and just looking for food and a winter coat.”

Carol Scott, a St. Paul and St. Andrew community member who works as a paralegal for Bronx Legal Services, noted the tension between what can be done to support a small group of people and the enormity of the need related to a complex social issue.

But a “real widening of the circle” among communities of faith and neighborhood organizations has developed in this response to human need, she said.

“When we live welcome, that makes it possible for others to take pieces of the project and move forward in ways that we might not even anticipate,” Scott added.

One of those pieces was a backpack project. A donation by John Street United Methodist Church helped kick the project off, Matthews said, and others, such as Congregation Rodeph Sholom, a Jewish partner, have joined in.

St. Paul and St. Andrew has committed to send 50 backpacks and a food donation from church partner West Side Campaign Against Hunger twice a month to La Morada, a restaurant and mutual aid network in the Bronx that distributes the bags to shelters. Previously, the church had worked with La Morada on food assistance during the COVID-19 pandemic. 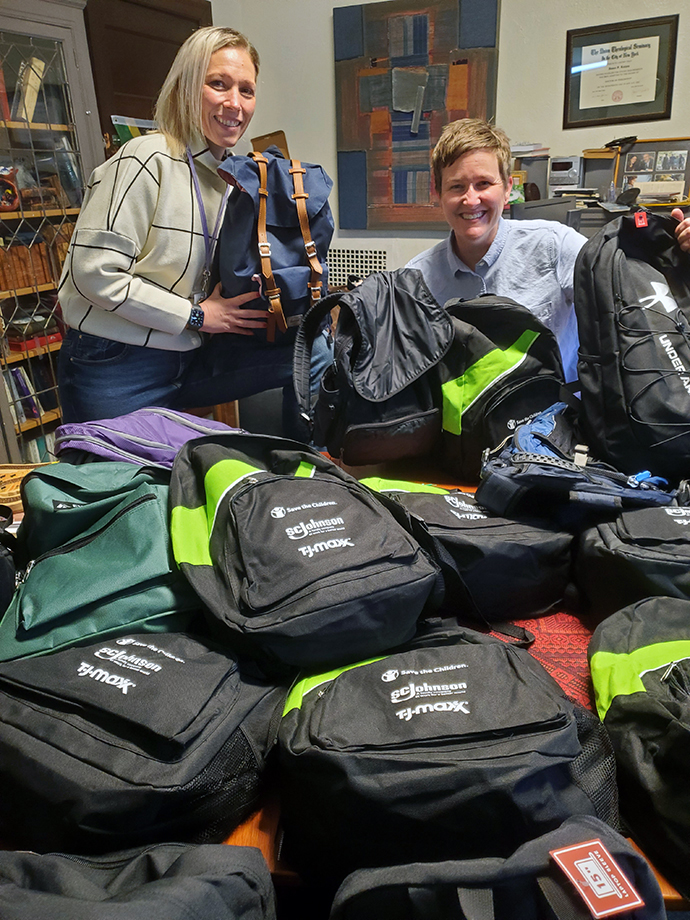 Another new piece of the ministry is welcoming asylum seekers to the church sanctuary on Monday mornings to receive information and assistance, share stories and connect with one another.

On the Monday after the first Sunday in Advent, for example, church member Fatima Bae arranged donated clothes and coats at the front of the sanctuary. She has collected and distributed used clothing in the neighborhood for 20 years and keeps a supply of men’s and women’s shoes for emergencies. “Then I have something to give away,” she said.

On the opposite side, church members Karen Collins and Rosangela Oliveira stacked registration forms for the West Side Campaign Against Hunger, which provides access to healthy food and supportive services and is based in the building.

They also distributed backpacks to families and individuals throughout the morning. Each backpack included a reusable water bottle, toiletries, socks, snacks, an English-Spanish dictionary, a $22 NYC Metrocard and a $20 bill.

By 10 a.m., a table of food, donated by B’nai Jeshurun — a nearby synagogue that has shared space with St. Paul and St. Andrew over the years — was set up for those who want an early lunch.

Another table was staffed by Héctor Arguinzones and Niurka Meléndez of Venezuelans and Immigrants Aid. The husband-and-wife team founded the organization, also a partner of the West Side Campaign Against Hunger, in 2016.

“There was a need for Venezuelans to communicate with someone who understood them and the reasons they left,” Arguinzones said. The all-volunteer organization also helps those from other Spanish-speaking countries, such as Panama, Honduras and Colombia.

Information is crucial to navigate the city and the immigration system, he added. “We refer Venezuelans to the services they need.”

The number of backpacks distributed on Mondays rose from 30 to more than 70 over a few weeks. But the volunteers assisting on those days also are learning what else is needed. Beginning Jan. 1, bigger items, such as diapers, menstrual supplies, winter clothing and shoes, will be available, but not in backpacks, Matthews said. However, church members will continue to prepare the essential-item backpacks to send to La Morada each month. 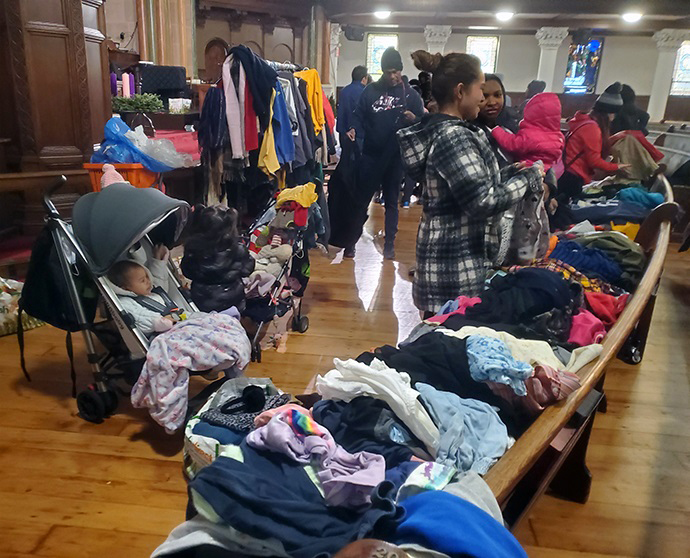 Donated clothing fills a front pew at the Church of St. Paul and St. Andrew in New York City, including coats and warmer garments for the approaching winter. Photo by K Karpen.

Church member Julia Tulloch called the overall cooperative effort a model that other churches could use. “In many ways, SPSA has been a catalyst that has pulled together these other organizations that have buckets of knowledge on how these (city and immigration) systems work,” she said.

Others in the denomination’s New York Conference are reaching out as well, according to the Rev. Nikki Hutt, the conference’s disaster response and mission ministry coordinator. And two other New York City congregations are directly involved in migrant ministry, she said.

First Spanish United Methodist Church in Harlem offers a respite center for migrants from 2 to 4 p.m. Tuesdays through Fridays, where visitors can find clothing, learn English and have a meal. The Rev. Dorlimar Lebrón Malavé is the pastor.

Bay Ridge United Methodist Church in Brooklyn, led by the Rev. Matthew Schaeffer, is collaborating on migrant ministry with the Lutheran Church of the Good Shepherd, where Bay Ridge currently rents space.

Schaeffer said the Rev. Juan Carlos Ruiz of Good Shepherd has been involved with the sanctuary movement and an immediate action was to provide three days of respite space to some arriving migrants in a café area off the sanctuary. The arrivals also were greeted with both warm coverings and warm words through a prayer shawl ministry, with a notecard saying that they were being prayed for.

“We were responding to this huge influx,” Schaeffer recalled. From August through October, it could be “pretty chaotic” as the two congregations tried to care for and assist the 15 to 20 people who could be staying there at any one time. “We’ve networked with a lot of volunteers from different organizations.”

The flow of new immigrants has decreased, he added, but the relationships continue as “the people who came here understand that this is a resource center,” he added. Beyond the basics, resources also might include ESL classes, accompaniment to check-ins and legal appointments, assistance on obtaining work permits and even acupuncture treatments.

Hutt is applying for a $10,000 solidarity grant from the United Methodist Committee on Relief to split among the three congregations as they continue to assist asylum seekers.

Bloom, a member of the Church of St. Paul and St. Andrew, is retired from UM News.

Healing Guatemala, a medical mission in Guatemala that is connected with the South Carolina Conference, is taking a huge leap of faith in the hopes of saving a young girl’s life. The ministry is arranging to get a bone marrow transplant for Dulce, a 10-year-old with a rare genetic disorder. But Healing Guatemala needs financial help for the procedure.
Disaster Relief

California is continuing to deal with storms causing devastating floods, and it’s still too soon to assess the scope of the damage. But United Methodists are already doing what they can to help.
Church Leadership