The five jurisdictional conferences — meeting simultaneously across the U.S. — elected a new class of United Methodist bishops that includes a higher percentage of women and people of color than previous election cycles.

The 13 new U.S. bishops, who take office Jan. 1, are taking the helm as The United Methodist Church faces the ongoing fallout of a global pandemic and a slow-motion separation after decades of debate on LGBTQ inclusion.

“I anticipate that the impact of their leadership will be felt as soon as they arrive on the scene,” he said in a press release. “This is a historic class that adds needed diversity to the work of our council. They also represent some of the shifts needed in the denomination at this point in our life together.” 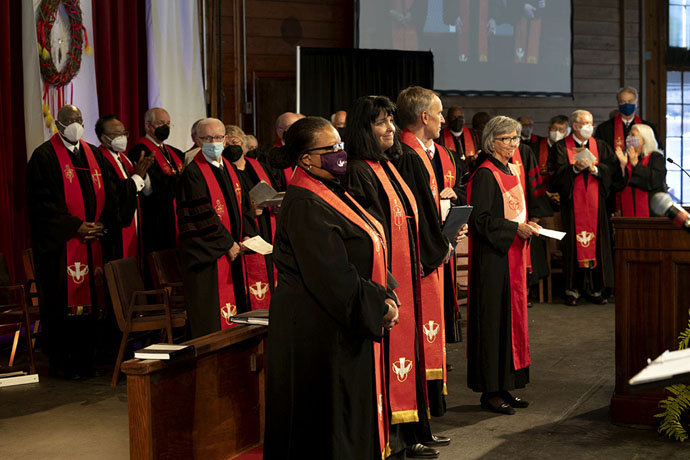 Even amid mounting church disaffiliations, those who plan to remain United Methodist showed signs of greater unity — collaborating across jurisdictional lines in trying to set the direction of the denomination’s future. For example, all five jurisdictions approved similarly worded petitions that aspire to a future United Methodist Church “where LGBTQIA+ people will be protected, affirmed, and empowered in the life and ministry of the church.”

That includes electing the most “firsts” to United Methodist episcopal office since 1984. That year, the Western Jurisdiction elected the denomination’s first Japanese American, first Hispanic/Latino and first Black woman bishop. 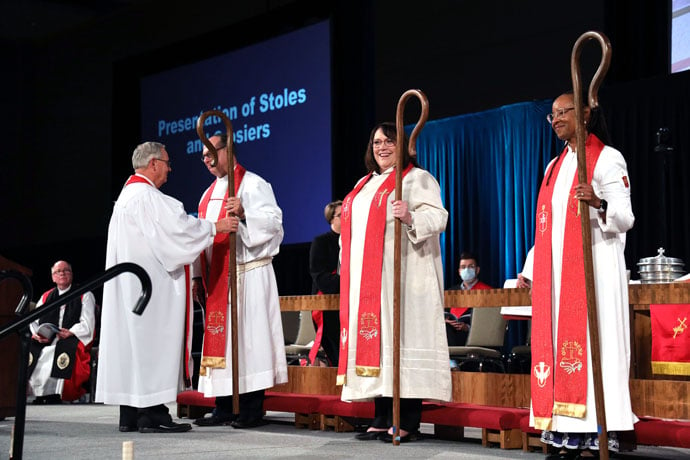 This year saw the election of:

The South Central Jurisdiction made history in another way, electing three bishops — Williamston, Wilson and Bishop Laura Merrill on the first ballot. According to the United Methodist Commission on Archives and History, only twice before have U.S. Methodists elected more than two bishops on the first ballot — both times in the 19th century before the current jurisdictional election system.

Of the 13 U.S. bishops elected at the 2022 jurisdictional conferences, seven are women and eight are people of color. Bishop Kennetha Bigham-Tsai, the first bishop elected this year, is a Black woman and the third Black woman elected to the episcopacy by the North Central Jurisdiction.

With the election of seven women bishops this year and seven in 2016, about 44% of U.S. bishops are now women.

“I believe the election of more women is a testament to the experience of those who have been blessed serving under the leadership of women,” said Dawn Wiggins Hare, the top executive of the United Methodist Commission on the Status and Role of Women.

“As we journey towards perfection, part of that journey is to recognize the knowledge, spirit and skills that women bring as we are created in the image of God. Our journey is not complete, but this was a huge step forward.” 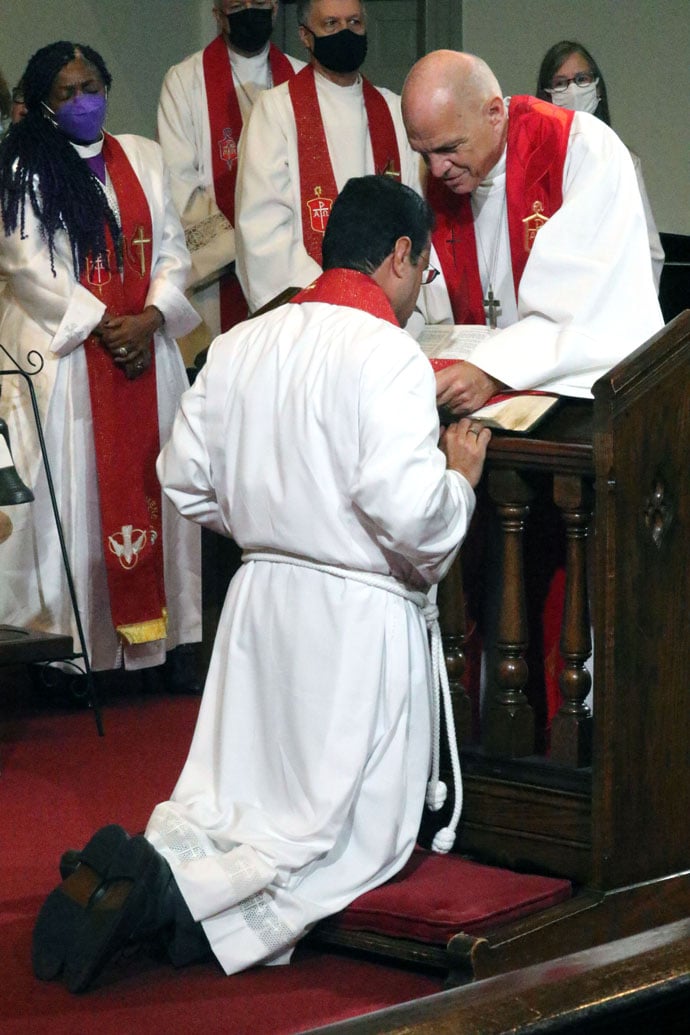 Greater New Jersey Area Bishop John R. Schol presents a bishop’s stole to newly consecrated Bishop Héctor A. Burgos-Núñez during the Northeastern Jurisdictional Conference’s service of consecration at the University of Maryland’s University Chapel in College Park, Md., on Nov. 4. With his election on the third ballot, Burgos-Núñez became the first Hispanic/Latino bishop elected in the jurisdiction. Photo by the Rev. Thomas Kim, UM News.

The Rev. Giovanni Arroyo, the top executive of the United Methodist Commission on Religion and Race, likewise noted the progress in electing people of color to serve as bishops.

“It is also important to note that having a first in our elections in 2022 highlights how systemic racism has been so alive in our church,” Arroyo said. “Why did it take 21 jurisdictional conferences for the Northeastern Jurisdiction to elect a Latino, for example?”

There are also still other demographic “firsts” that The United Methodist Church has yet to see including the election of a Pacific Islander or Asian American clergywoman as bishop.

Even amid the various barrier breaking this year, bishop elections did not go smoothly in all the jurisdictions. After getting deadlocked between two episcopal candidates, the Northeastern Jurisdiction ultimately decided to elect only one bishop rather than the initially planned two.

Both the Southeastern and Western jurisdictions also took time out of their work to grapple with the racism faced by some of their bishop candidates.

Still, there is no question that church disaffiliations are changing the church including on matters of race.

Bishop John Schol noted in giving the Northeastern Jurisdiction’s episcopal address that the overwhelming majority of churches disaffiliating in that jurisdiction are predominantly white.

After electing 13 new bishops during their Nov. 2-5 meetings, the denomination’s five U.S. jurisdictional conferences announced episcopal assignments effective Jan. 1.
Western Jurisdiction Bishop Minerva Carcaño has been reassigned to the California-Nevada Conference. She has been under suspension since March while complaints against her are investigated.
The Rev. Mary Huycke, the outgoing chair of the Western Jurisdiction’s episcopacy committee, said that Carcaño remains a bishop in good standing and as such, she must receive an assignment.
“Suspension is not meant to be punitive, and it’s not a change of status. She is just relieved of her duties. She is still being paid, and she is still in good standing” Huycke said. She said the jurisdiction’s Committee on Episcopacy will consult with the Committee on Investigation to see if the recommendation that the bishop be suspended still holds.
Carcaño attended the week’s jurisdictional conference as an observer. She faces mandatory retirement in 2024 because of her age.
“Considering the work before us and considering the short time I have left before retirement," Carcaño said, "I am grateful for the opportunity to return to California-Nevada and work toward completing some goals and achieving some things that God has called us together to do.”
See full assignments.

“African Americans are once more staying with The United Methodist Church to make it a better church, as they have done before,” said Schol, who leads the Greater New Jersey and Eastern Pennsylvania conferences. “The United Methodist Church owes a great debt that must be paid by ridding the church of the sin of racism and making ours a church that chooses equity rather than only equality.”

Another indication of change: A group of South Central Jurisdiction delegates took a moment of personal privilege to apologize for their jurisdiction’s role in challenging the election of Bishop Oliveto in 2016.

“We would like to extend from our hearts to those in the Western Jurisdiction our deepest apologies for the harm that we have done,” said the Rev. Katie McKay Simpson, a clergy delegate from the Louisiana Conference, standing with other delegates. “We are so, so sorry. There is not much that can be fixed but there is certainly much we can do to usher in the new birth of a vital and vibrant church that is in store for us, starting with an awareness of a better way possible.”

Watching video of McKay Simpson’s apology the following day, the Western Jurisdiction responded with a standing ovation and plans for a more formal response.

While electing bishops was their main work, the five conferences debated and acted on other matters, and their unified approach was striking.

All approved resolutions calling for more regional governance of The United Methodist Church. The resolutions offered specific support for the Christmas Covenant and Connectional Table legislation that would create a U.S. regional conference.

Supporters say the regional approach would create more equity in governance and allow the Book of Discipline to be adapted more easily for missional effectiveness.

The Rev. Magrey deVega, a Florida Conference delegate, spoke for the resolution before the Southeastern Jurisdictional Conference, saying more regional governance “offers an exciting and hopeful vision of The United Methodist Church.”

But there were speeches against the resolution in the Southeastern Jurisdictional Conference, and a vote by show of hands was close enough to require electronic balloting. The resolution was approved with 203 in favor and 115 opposed.

The five jurisdictional conferences also approved a resolution titled “Queer Delegates’ Call to Center Justice and Empowerment for LGBTQIA+ People in the UMC.”

Among other things, the measure calls for annual conferences to either not pursue or resolve through a non-punitive, just resolution process any complaints against clergy regarding their sexual orientation or officiating at same-sex weddings.

Jesi Lipp, a lay delegate from the Great Plains Conference, co-sponsored the resolution in the South Central Jurisdictional Conference, and in a floor speech argued that gay people continue to face discrimination as they try to participate fully in the denomination.

“Too many of us are still not seen,” Lipp said. 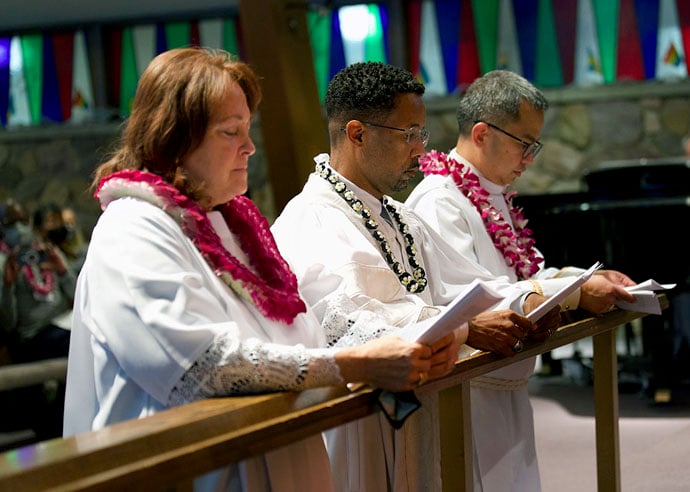 The resolution passed 128-35 in South Central. But another Great Plains lay delegate, Dixie Brewster, asked presiding Bishop Cynthia Fierro Harvey for a decision of law to determine if any provisions contradict the Book of Discipline. Harvey has 30 days from the date the resolution passed, Nov. 3, to respond.

The jurisdictional conferences also weighed in on disaffiliation, approving resolutions asking that those who are committed to leaving The United Methodist Church refrain, as a matter of integrity, from serving in leadership roles as their time in the denomination winds down.

In the Northeastern Jurisdictional Conference, New England Conference youth representative Galen Schad said those leaving have a conflict of interest that requires asking them to step aside.

But Scott Johnson, a Texas Conference lay delegate, spoke against the resolution before the South Central Jurisdiction. His church has voted to disaffiliate but remains part of the denomination until the Texas Conference meets next month to consider approving churches’ departures.

Johnson said he ran to represent those concerned that the Book of Discipline is not enforced, and that they would be disenfranchised if he ended his service as delegate early.

In what may have been the single most widely shared line from the five jurisdictional conferences, Copeland implored the South Central College of Bishops to hold accountable fellow episcopal leaders who aren’t fully committed to The United Methodist Church.

“Simply stated, one cannot play for the Astros and pitch for the Phillies,” Copeland said.

As the jurisdictional conferences pushed toward conclusion last week, word came that the next General Conference will be held April 23 to May 3, 2024, in Charlotte, North Carolina.

Barring something unforeseen, the next round of jurisdictional conferences — with bishop elections again the main business — will occur the following July.

For now, many church leaders are urging United Methodists to stay focused, faithful and calm. Bishop James Swanson reminded the Southeastern Jurisdictional Conference of Jesus telling the disciples to not be afraid.

“Even with all the rumbling and the rumors and everything that’s going on,” Swanson said, preaching Nov. 2, “do not let your hearts be troubled.”

Hahn is assistant news editor for UM News, Hodges is a UM News reporter in Dallas, and Kim is director of Korean and Asian news at United Methodist Communications. Tim Tanton contributed, as did conference communicators. Contact Hahn, Hodges and Kim at (615) 742-5470 or [email protected]. To read more United Methodist news, subscribe to the free Daily or Weekly Digests.

Bishop Gary Mueller offers six principles for the denomination to remain united and show the world the difference that Jesus makes.
Bishops