Josefa Bethea Wall has long been troubled by that memory — The United Methodist Church’s first African-American woman bishop had to travel across the United States to break barriers. Kelly, elected in 1984, died at the age of 92 in 2012.

“I watched history say ‘I’ve got to go,’” said Wall, the daughter of the late Bishop Joseph B. Bethea. “Yesterday, I saw history walking back.”

Wall was among a crowd of Southeastern Jurisdiction women who gathered July 14 to celebrate and pray the day after the Revs. Sharma Lewis and Sue Haupert-Johnson were elected as bishops by the jurisdiction. Lewis will be the first African-American woman to hold that leadership role in the Southeast. 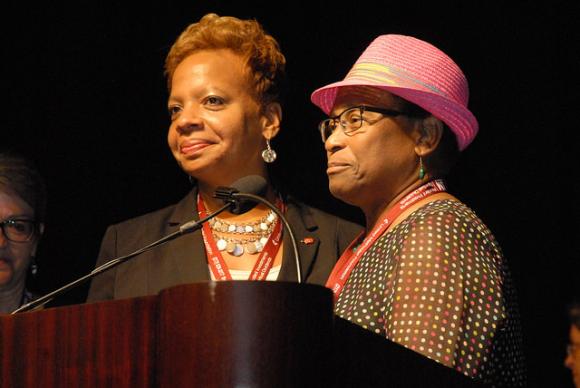 As of July 14, The United Methodist Church already was making history this year — electing the most women in any new class of bishops in this denomination or its predecessor bodies.

In addition to Lewis and Haupert-Johnson, the Revs. Cynthia Moore-Koikoi and LaTrelle Miller Easterling were elected in the Northeastern Jurisdiction, along with the Revs. Tracy Smith Malone and Laurie Haller in the North Central Jurisdiction. The Western Jurisdiction elected the Rev. Karen Oliveto, who is also making headlines as the denomination’s first openly gay bishop.

In the U.S., only the South Central Jurisdiction did not elect any women among its three new bishops. Bishop Cynthia Fierro Harvey is that jurisdiction’s sole active woman bishop.

More milestones are ahead. Starting Sept. 1, women will lead The United Methodist Church’s two largest conferences in the U.S. in terms of membership. The Southeastern Jurisdiction episcopacy committee assigned Haupert-Johnson to lead the North Georgia Conference, with more than 360,000 members, and Lewis to lead the Virginia Conference, with more than 327,000 members.

These breakthroughs all happen to coincide with the 60th anniversary of the Methodist Church granting full clergy rights to women.

Many of these new bishops discussed the gifts and experiences they hope to bring to leading a denomination struggling with declining U.S. membership and theological divisions related to human sexuality.

“As a woman of color, I have learned the gift of perseverance, being able to hold onto hope in the midst of oppression,” said Moore-Koikoi, shortly after her election.

“Our denomination needs that. As our pews become more empty, as we experience more financial difficulties, we have to hold out hope. I’ve had to use my spiritual eyes.” 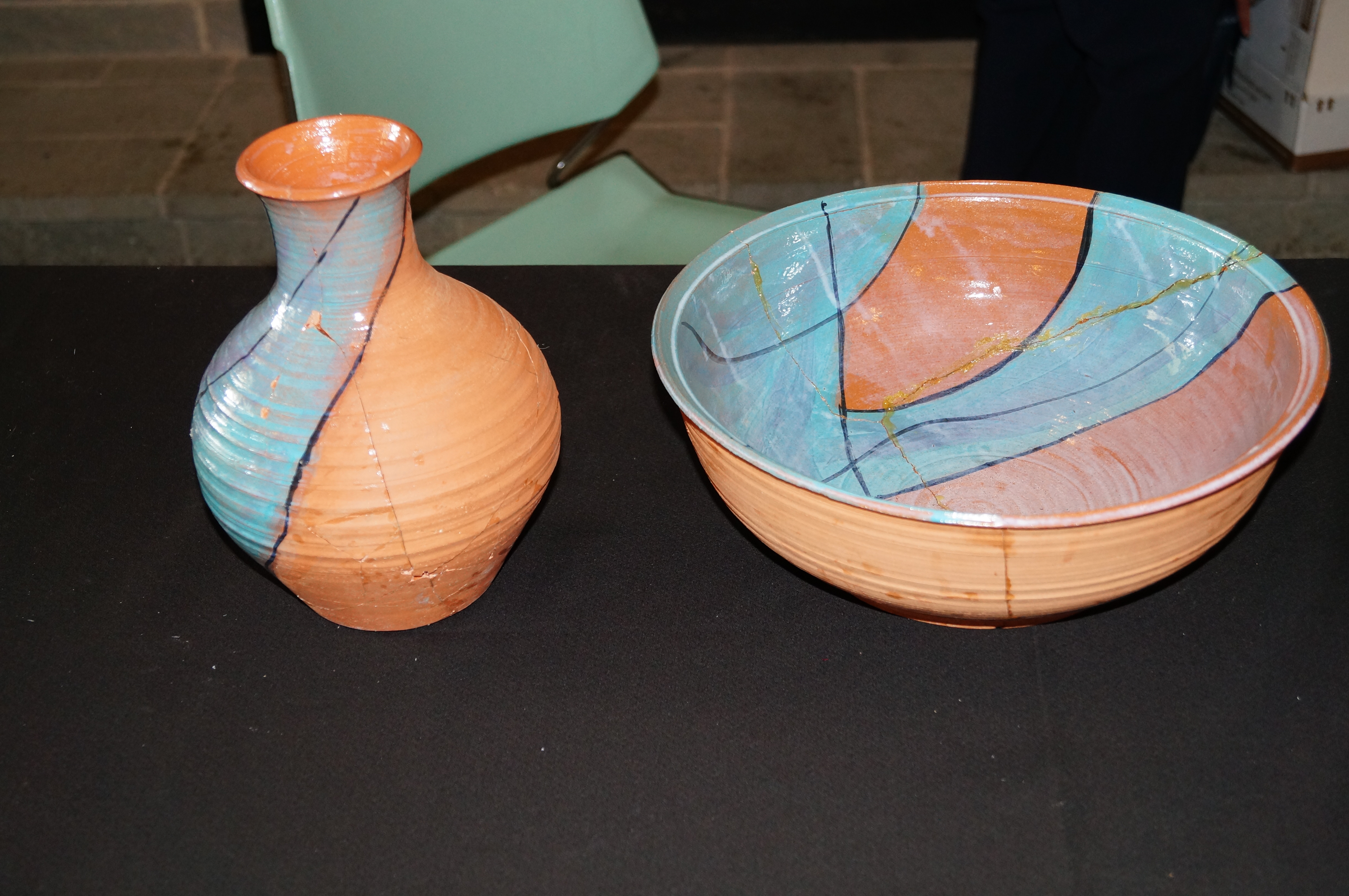 The once-broken, now-repaired pitcher and bowl clergywomen had originally given to the Rev. Helen Crotwell, who they hoped would be the Southeast’s first woman bishop. Photo by Jasmine Haynes, Mississippi Conference

In the Southeast, United Methodist women took a break from discussing the church’s challenges to celebrate the strides women have made across the denomination.

Retired Bishop Charlene Kammerer presented a visible reminder of that progress — a mended bowl and pitcher.

Kammerer recounted that clergywomen in the Southeastern Jurisdiction had bought the brown-and-turquoise pottery in the 1980s for the Rev. Helen Crotwell, their endorsed bishop candidate. Crotwell had served as an assistant dean of chapel at Duke University and as the first woman district superintendent in the North Carolina Conference.

“Helen was a remarkable pastor, prophet and priest,” Kammerer said. However, Crotwell’s election wasn’t to be, and the clergywomen’s gift arrived shattered.

Crotwell decided to leave the pottery in pieces until the Southeast elected its first woman bishop.

That happened with Kammerer’s election in 1996. That night, Kammerer and Crotwell joined in a celebration that cracked the glass ceiling and mended the cracked vessels.

By then, Crotwell was ailing and blind. Kammerer guided her hands to glue the bowl back together.

On July 14, 2016, the jurisdiction’s women gathered in that same room at Lake Junaluska Conference and Retreat Center for their celebration.

“Helen’s spirit is with us today,” Kammerer said. “She is in the heavenly kingdom with Leontine and many others.”

The pottery remains as a testament to Crotwell’s ministry in the North Carolina Conference, where Bishop Hope Morgan Ward now serves. “These are really holy vessels to us,” Ward said.

With Lewis and Haupert-Johnson, the Southeast has five active women bishops.

“I’ve had the blessing of being a lot of ‘firsts,’” Lewis said. “But even in being the first, I really believe in reaching back and pulling up. We’ve got to reach back to the seminary students and even babies who think they have a call.” 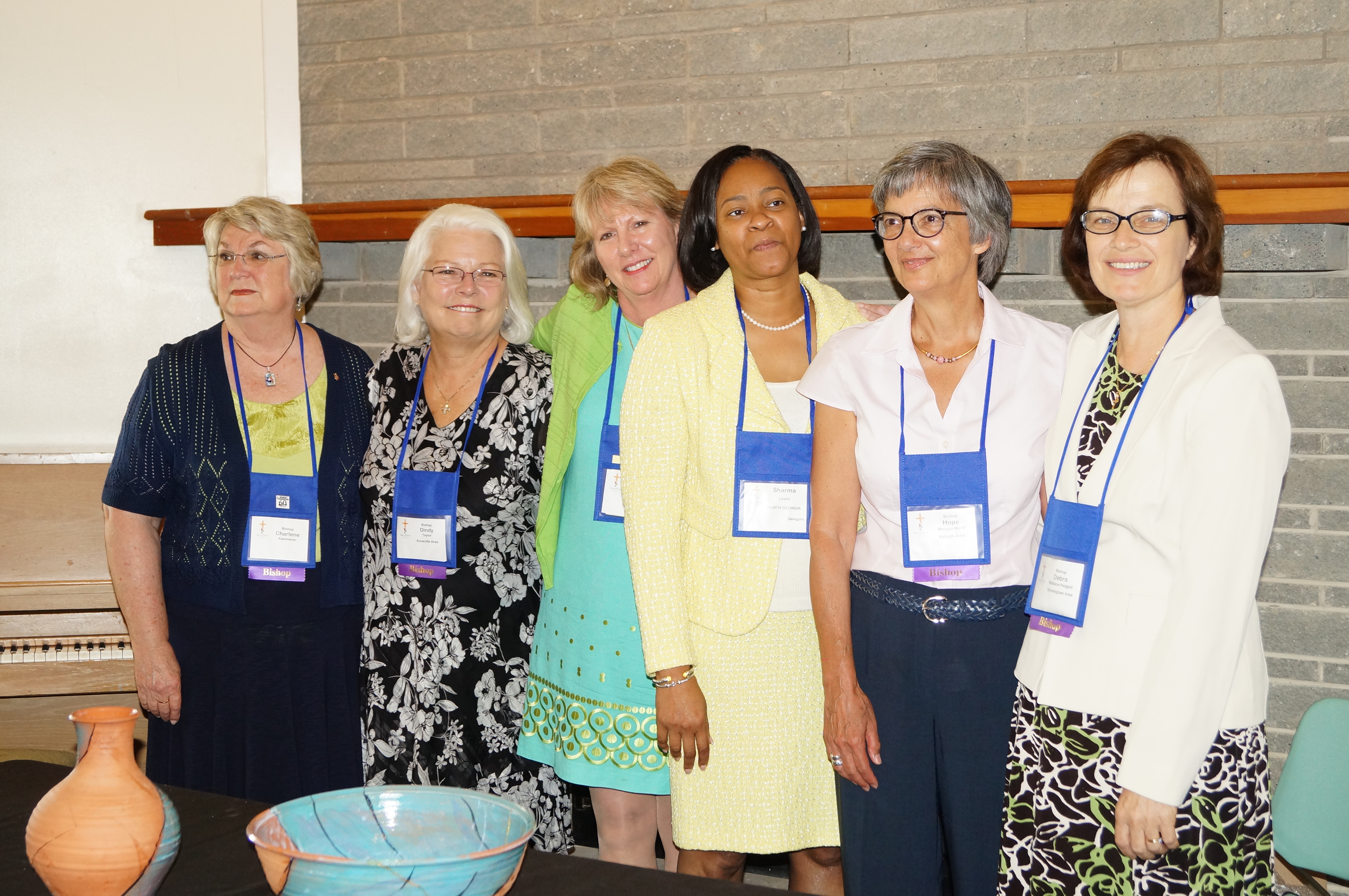 Looking to the future

Linda King, a Kentucky Conference delegate, was among the women who got tears in her eyes when gazing at her jurisdiction’s new women leaders.

“When I went to Western Kentucky University, the counselor said to me: Do you want to major in secretarial science or be a nurse or a teacher, and I didn’t know any different,” said King, who became a teacher.

“You are opening doors,” King told the women bishops. “God has blessed us.”

The United Methodist Commission on the Status and Role of Women long has advocated for the denomination’s women to be able to live out their calls from God.

Dawn Wiggins Hare, the agency’s top executive, was a delegate from the Alabama-West Florida Conference and voted in the Southeast’s bishop elections.

Virginia Greer, 23, was among those at the celebration. She is an admitted clergy candidate in the Virginia Conference and student at Emory University’s Candler School of Theology.

“This means my way will be a little bit easier because of all these amazing women,” she said.

Both Lewis and Haupert-Johnson paid tribute to the women who blazed the trail ahead of them to the episcopacy. Along with others in the jurisdiction, they “called the roll” of previous African-American and Southeastern Jurisdiction women bishops.

“We look forward to the day when we can't remember them all because there are so many,” Haupert-Johnson said.

From California to Louisiana to Iowa, United Methodists are responding with prayer, comfort for the grieving and renewed calls for advocacy against gun violence.
Mission and Ministry