Prudent investing is complicated at any time. But as Andrew Hendren works to get his sea legs as the new top executive at Wespath Benefits and Investments, the outlook is downright dizzying.

Inflation is on the upswing for the first time in decades. In response, the Federal Reserve will probably raise interest rates. That affects the stock market, which has already been erratic this year. And don’t forget about continuing supply-chain issues and the potential of Russia invading the Ukraine.

“You know what? You can’t really consider the safekeeping of the retirement security of 100,000 people lightly,” Hendren said in an interview with United Methodist News. “I did have some amount of reticence (about taking the job). Ultimately, I really felt called to continue this mission … for our participants and our investors in this time of uncertainty.”

Wespath administers benefit plans for United Methodist local churches, annual conferences and other affiliates. As of September, it directs investments of more than $29 billion.

“Andy is widely known and trusted across United Methodism,” said Bishop Robert Schnase, chair of the Wespath Board of Directors, in a statement. Schnase also leads the Rio Texas and New Mexico conferences.

“He is respected by his colleagues at Wespath and knowledgeable of the organization’s history, governance and principles. Andy has a sincere passion for the mission of Wespath to help those who serve. His credibility and experience provide stability and continuity in a time of uncertainty in The United Methodist Church.” 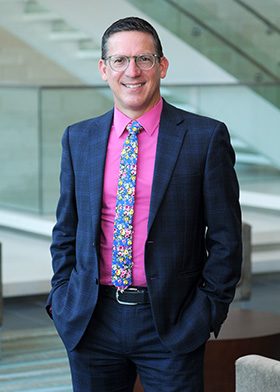 Hendren, 51, is a native of Columbia, Missouri. He has been working at Wespath for 17 years, and succeeded Barbara Boigegrain in the top job on Jan. 1. She held the post for 27 years.

“He's a chess player rather than a checker player,” said Brant Henshaw, Hendren’s friend and treasurer and director of administration for the Pacific Northwest and Alaska conferences. “He’s always thinking ahead and thinking through contingencies and alternatives.”

He also brings varied life experience to the job, including a year living in Bulgaria, another skiing in Colorado and then studying improvisational comedy in Chicago with legendary teacher Del Close.

“I think what it brought was a sense of curiosity and exploration,” Hendren said about his Bulgaria and Colorado experiences. “It's OK to take some time to figure out where you need to go next.”

The improv training helps him think quickly on his feet.

“It can certainly help you when you get pulled onto the floor of the General Conference,” he said.

Hendren is married to Lizzie Hendren, a social worker from England who works with victims of domestic abuse. They have two “super spoiled” cats.

Hendren considers Wespath “my life’s work.” The agency’s principled stance on conscientious investing — Wespath uses its influence to encourage companies to consider the environmental and social implications of their strategies — is not an impediment to getting profitable results, he said.

“It’s all part of getting the best return as a long-term investor,” Hendren said. “We believe that looking past the day-to-day fluctuations of the market to find investments that have long-term value for our investors involves thinking about how those corporations are adapting to this changing time.

“How are they thinking about diversity, equity and inclusion for their customers and their boards? Because, you know, studies have shown that more diverse and inclusive boards of directors and employee workforces make better returns for corporations.”

Although Wespath does invest in energy companies, it favors firms that are adjusting to a lower-carbon model, Hendren said.

“The (better) companies to invest in are thinking about that long-term future,” he said. “They’re going to be — we believe — the winners in the longer term, because they're going to be prepared for that future.”

Hendren will continue Boigegrain’s focus on positive social-purpose lending opportunities, under which Wespath has invested in projects like low-income housing and health centers.

It’s another instance where doing the right thing results in lucrative investments. It also performs a service for underserved communities.

“I think we’ve done $2 billion over 30 years (in social-purpose lending), and I think maybe we have around $600 or $700 million invested in it right now,” Hendren said. “They’ve been very successful … but they also do good in the world.”

Wespath divested from coal companies five or six years ago, he said.

“We do continue to invest in oil and natural gas companies as part of our regular portfolio of equity stocks,” he said. “It’s important that our firms generally reflect the overall market.”

Being an investor allows Wespath to influence the direction of those companies to a degree.

“We can engage with their management and we can encourage them to think about the future and diversify their own businesses, to think about renewable energy sources and the lower-carbon future, because the days of everybody driving petroleum-powered cars are probably numbered.”

With the likely split of the United Methodist denomination soon because of differences in approaches to LGBTQ people, Wespath officials are positioning the agency to work with the church that remains as well as new entities like the Global Methodist Church.

“We’ve done the best we can to allay the anxieties of our customers, whichever side of the spectrum they’re on,” Hendren said. “We’re in dialogue with all sides, and we’ve maintained this steady, non-anxious presence with the board’s belief that (Wespath) needs to be a bridge builder for the expressions in Methodism that emerge.”