At the beginning of this century, the Rev. Bill Jenkins did not imagine that he would see a deep transformational process in the congregation that he was starting to serve.

Jenkins had been appointed pastor of Christ United Methodist Church in 1999 in San Diego, and for 12 years, he had worked hard to revitalize a declining church.

“The first six years, we tried to grow the church in the old Billy Graham way: revivals, knocking on doors and all of that. The harder that we worked, the smaller the church got,” he said.

In 2005, he told the congregation, “If we don’t do something different, you know what could happen: The church will be closed, the property sold, and you know that movie.” 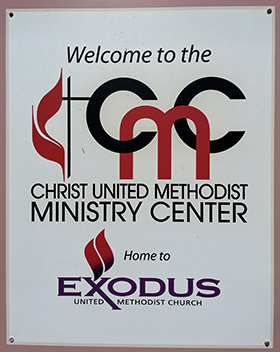 Exodus United Methodist Church brings together the Haitian community established in San Diego. It is located at the United Methodist Christ Ministry Center, along with 10 other churches. Photo by the Rev. Gustavo Vasquez, UM News.

Jenkins shared with local and conference leaders a proposal for a different church model, focused on community ministries and services. Based on the biblical passage in Matthew 25, about the final judgment and the importance of caring for those in need, he proposed changing the traditional congregation model into a ministry center.

“I wanted to let them understand that it would be such a great loss if we just closed the church and sold the property,” Jenkins said.

“Almost everything is around Sundays,” Jenkins said. “If 90% of the time, energy and congregational resources are focused on a few hours during Sundays, the church is on its way to death. The ministry center is a seven-day church.’

The decision to change the church ministry model affected attendance significantly. “In 2011 — the last Sunday that I preached in the old congregation — we had around 35 people in attendance. Now, during the pre-pandemic days, we had around 2,000 people a week,” Jenkins said.

Even amid the pandemic, more than 1,000 people meet every week in the building. Sunday worship alone draws about 300 people to the 10 racially and denominationally diverse congregations hosted in the United Methodist Christ Ministry Center.

Migrant ministries are common in border areas. The former Christ United Methodist Church had a refugee assistance program that was revitalized and expanded under the new ministerial model.

“For more than 20 years, we have been in love with ministry among migrants. My estimation is that we have helped around 10,000 migrants in 20 years,” Jenkins said.

In 2009, a group of 22 Haitian migrants arrived at the center seeking shelter. They stayed in rooms that were prepared in the building, then they started worshiping on Sunday nights because that was a time when the chapel was empty.

What I learned from Harry 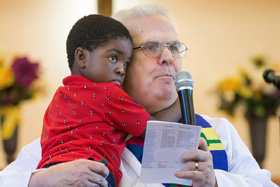 The Rev. Bill Jenkins preaches during worship at Exodus United Methodist Church in San Diego in 2018 while holding his son Harry, who is from Haiti. File photo by Mike DuBose, UMNS.
When the Rev. Bill Jenkin’s wife Anita first agreed to take in a homeless Haitian child, he was surprised. But through the experience, he learned three key lesson about life and the transformative power of love.
Read story

“That’s not empty anymore,” Jenkins said. “They came to our Sunday worship, with their wonderful Caribbean-rhythm gospel music, and we doubled our attendance, just opening our arms, our hearts, our minds and our pockets to receive them.”

The earthquake that struck Haiti in 2010 drove many people seeking refuge to the U.S. History repeated itself with another deadly earthquake in Haiti early this year, and the new refugees to the U.S. knew about the Haitian United Methodist congregation and the support it offered. More than 300 took shelter at the ministry center and became part of the new Haitian United Methodist Church.

In 2011, about 46,000 Haitian migrants went from the U.S. to Brazil seeking job opportunities, drawn by construction companies looking for cheap labor to support work related to the soccer World Cup and the Olympic Games.

In 2016, after the Olympics, Brazil became politically unstable. A presidential impeachment occurred, the economy was hit and the new political administration kicked out the Haitian migrants.

Many of the migrants have been trying to return to the U.S. Last year, more than 6,000 Haitian migrants were on the border in Tijuana, waiting for asylum, according to the Asociación de Defensa de los Migrantes Haitianos (Haitian Immigrants Advocacy Association).

“On Thanksgiving Day, the border was closed for Haitians, and around 6,000 were allowed to cross, and we received 5,000 of them. Another 40,000 remain somewhere out of the borders, most of them in Mexico but also in Central and South America,” Jenkins said.

In 2021, after the Biden administration reactivated the regular asylum process, new groups of Haitian migrants crossed the border and started sleeping on the streets of San Diego.

“We received a phone call telling us what was happening, and we went looking for them in a church van driving around downtown,” Jenkins said. “When they saw the van that says Haitian United Methodist Church, they said that they saw Jesus. 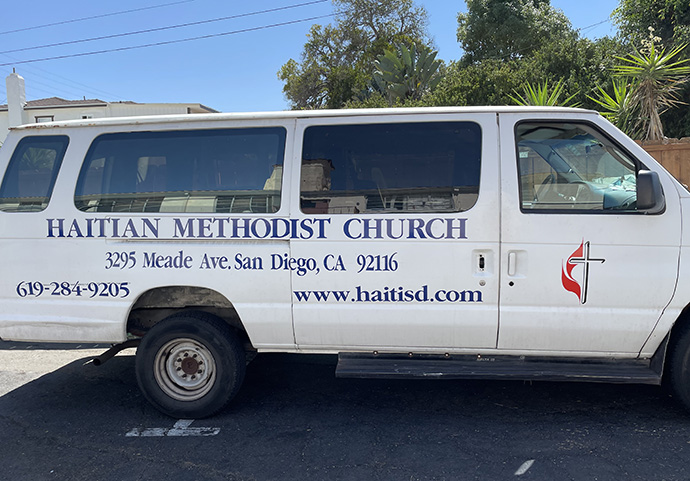 Many Haitian migrants who crossed into the U.S. at San Diego in 2016 saw the van belonging to Christ Ministry Center as a sign of hope. “When they saw the van that says Haitian United Methodist Church, they said that they saw Jesus,” said the Rev. Bill Jenkins, the center’s director. Photo by the Rev. Gustavo Vasquez, UM News.

The city’s fire department warned the Christ Ministry Center that the building could not accommodate so many families for safety reasons, so the center started finding other places to relocate people.

The center bought a house in front of the building, and churches and houses of worship from other religions opened places for about 150 people.

‘It was very hard’: Haitians risk lives to migrate 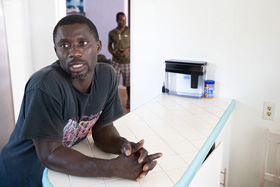 Ronald Fildor, 43, left Haiti in 2014, fleeing violence and misery. Photo Mike DuBose, UM News.
Ronald Fildor had to leave his country due to violence, insecurity and economic misery.
“I was robbed several times and (experienced) many other indescribable things. But thank God, we arrived.”
Read story

“Now we are renting more places through receiving some funding from international organizations, other churches, individuals (and) foundations, who believe in the ministry of welcoming the stranger,” Jenkins said.

Ronald Fildor, 43, is from Cap-Haitien. He left his country in 2014 and crossed 10 borders (Brazil, Peru, Ecuador, Colombia, Panama, Costa Rica, Nicaragua, Honduras, Guatemala and Mexico) to arrive in the United States.

“I arrived here in August with my wife and two daughters, after many difficulties,” he said. He was robbed several times and found people who had been murdered on the journey, he said.

Fildor and his family attended a church in Haiti and now have been in the Christ Center since August. They attend Exodus United Methodist Church, a Haitian congregation that operates in the center and is led by the Rev. Donald Owens. The pastor and the people of the center are their “only family,” Fildor said.

Most of the migrants need to stay 48 to 72 hours in shelters until they can travel to meet family or friends. About 10% don’t have a place to stay and need more time to find ways to incorporate into communities.

“We have been providing long-term care from six months to two years with the support of other organizations and churches,” Jenkins said. “It is a miracle to us to see how a dying small congregation has been able to help more than 10,000 people.”

*Vasquez is director of United Methodist News for the Hispanic/Latino audience. You can contact him at (615) 742-5111 or by email: [email protected].

To read more United Methodist news, subscribe for free to UMCOMtigo, a weekly summary of news and communications resources.

Watch a video interview with the Rev. Bill Jenkins.

The Rev. Bill Jenkins talks about how Christ United Methodist Church in San Diego changed from being a traditional church to a ministry center and opened its doors wide to those in need. Video by UM News.