The fallout of the special General Conference has slowed the yearslong effort to specify which United Methodist policies can be adapted in Africa, Europe and Asia.

For nearly eight years, church leaders have been combing through the Book of Discipline, The United Methodist Church’s main policy book, to determine what parts are essentials to the denomination's worldwide identity and what parts are nonessentials that can be adapted.

They initially planned to bring their recommendations for a vote at the 2020 General Conference, the next gathering of the denomination’s top lawmaking body.

However, at a March 21-26 meeting in Manila, the Standing Committee on Central Conference Matters decided instead to ask General Conference delegates to give feedback on the work they have done so far on what church leaders call the General Book of Discipline. 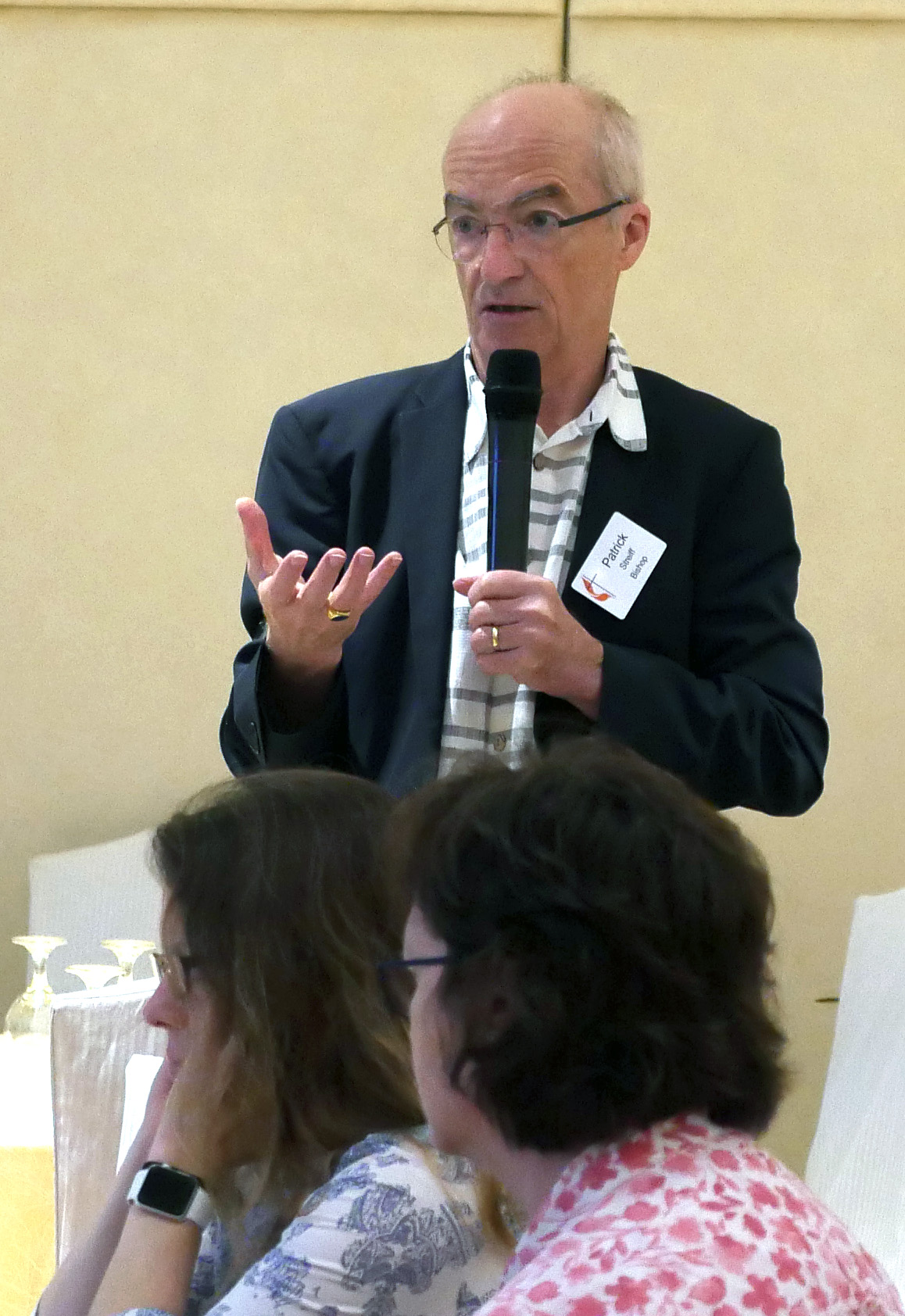 Central and Southern Europe Area Bishop Patrick Streiff addresses fellow members of the Standing Committee on Central Conference Matters. He urged the committee to delay putting work on a General Book of Discipline up for a vote at General Conference until 2024. Photo by Heather Hahn, UMNS.

“At present, we live in a situation of huge anxiety in the church and of low trust,” said Central and Southern Europe Area Bishop Patrick Streiff, one of the project’s leaders. “That is not a good moment for really clarifying how much adaptation ... we give to parts in the church.”

If delegates are asked to vote on recommendations so soon after the 2019 General Conference, Streiff said the discussion could turn into another battlefield.

“We would all lose on something where we first have to learn to be a worldwide church,” he said.

Streiff hopes the 2020 General Conference will provide time for delegates to discuss what binds the church together around the globe rather than make any final decisions.

Church leaders will ask the delegates to allow them to continue the work with the goal of presenting recommendations for final action at the 2024 General Conference. Ultimately, their goal is to collect the essentials in the General Book of Discipline.

The project to clarify what in the Discipline can be adapted began with General Conference itself. In 2012, the lawmaking assembly assigned the Standing Committee on Central Conference Matters to determine what in the Book of Discipline truly applies around the globe. At the time, Streiff was the standing committee’s chair and he continues to serve as chair of one of the committees working on the General Book of Discipline.

Who is working on the global Discipline?

In doing the work, the standing committee has the following partners:

However, unlike U.S. jurisdictions, central conferences have authority under paragraph 31 of the denomination’s constitution to make “such changes and adaptations” to the Book of Discipline as missional needs and differing legal contexts require.

The 2012 General Conference in Paragraph 101 of the Discipline also specified that certain sections of the Discipline apply to the whole multinational denomination. Those parts are the Constitution, Doctrinal Standards and Our Theological Task, The Ministry of All Christians and The Social Principles. Changing them requires at least General Conference action and, in the case of constitutional amendments, annual conference action as well.

That still leaves the Book of Discipline’s Part VI, Organization and Administration, the biggest section in the denomination’s policy book.

To decide what’s adaptable, the standing committee has worked with three other denominational leadership bodies — the Committee on Faith and Order, the Ministry Study Commission and the Connectional Table.

Much of what the leaders are doing is going through Part VI’s paragraphs one by one to see what can be adapted in local contexts. Whatever they deem adaptable, they propose moving to a new Part VII in the Book of Discipline, which would still apply to the United States.

However, that method hasn’t worked with Part IV’s Chapter 5, which deals with the denomination’s general agencies.

“It’s really difficult to divide the work of agencies into an adaptable part and a non-adaptable part,” said Dr. Kasongo Peniel, a standing committee member from Kolwezi, Democratic Republic of Congo, who has helped lead the work on Chapter 5.

Instead, the committee plans to ask the 2020 General Conference to change the mandate related to Chapter 5 so that the committee, working with agency executives, could submit legislation that rewrites the entire chapter with more theological grounding.

As with the rest of the General Book of Discipline effort, the hope is to develop legislation to be acted on by the 2024 General Conference.

The non-adaptable Social Principles contain the denomination’s definition of marriage and the assertion that the practice of homosexuality is “incompatible with Christian teaching.”

Leaders working on the General Book of Discipline have been striving to keep their work completely separate from the ongoing debate and have not touched these restrictions.

For example, those working on the Book of Discipline’s section dealing with judicial administration list the chargeable offenses paragraph as non-adaptable, even if they personally would like to see a change. But they hope to specify what principles in the judicial process should apply throughout the church.

In May, standing committee members plan to finalize what they are submitting to the 2020 General Conference for delegates’ feedback.

Throughout the effort, Streiff has championed the goal that the denomination ultimately will have a slimmer, more globally applicable Discipline.

“It is my deep conviction that the Discipline is a covenant of what essentially binds us together,” he said. “What is needed for building such a covenant? Conferencing is needed. Talking and sharing and finding where the consensus is on what is essential.”

Hahn is a multimedia news reporter for United Methodist News Service. Contact her at (615) 742-5470 or [email protected].To read more United Methodist news, subscribe to the free Daily or Weekly Digests.

Denominational leaders are working to determine what in the Book of Discipline really should apply throughout the multinational denomination.
General Church

A committee for The United Methodist Church is trying to determine what parts of its Book of Discipline are not adaptable outside the U.S.
Bishops

A church leadership body is submitting a plan that would add a central conference to Africa and increase the number of bishops from 13 to 18.