More than 200 United Methodists from the Western Jurisdiction gathered Nov. 14-16 to cast a vision and dream of a future for The United Methodist Church that is diverse and inclusive of “all God’s children.”

By the summit’s end, a working group of five clergy and five laity were elected as a visioning team. That team will bring a report to the 2020 Western Jurisdictional Conference to be held July 15-18, 2020, in Billings, Montana.

That plan came after hours of conversations, reams of sticky notes and large newsprint pages overflowing with ideas of what kind of future the participants want for a “fresh Methodism.”

“There was a lot of energy around the room of what we wanted to get to but not how we were going to get there,” said the Rev. Joe Kim, pastor of Bothell United Methodist Church, Washington. Kim presented the plan for the team to the summit and is now a member of the team.

“I am thankful the body was willing to put the trust in the people who are here,” he said. “I am hopeful they can go beyond the baggage of institutional hierarchy and bureaucracy to dream something.”

The team will bring a draft report to the Western Jurisdiction. The draft will be “the mission and structure of what new thing we could affiliate to with or without The United Methodist Church,” Kim said.

At the core of the summit was affirmation of LGBTQ people and their role in the church. The gathering asked participants to prepare for the 2020 General Conference and what the future might be for the Western Jurisdiction if the church decides to stay with the Traditional Plan.

Legislation passed by the 2019 General Conference maintains the church stance, which dates to 1972,  that the practice of homosexuality is “incompatible with Christian teaching.” That legislation, known as the Traditional Plan, strengthened church bans against ordination of "self-avowed practicing" gay clergy and same-sex unions.

“We see the Summit as an important model for the future, where we rely less on formal processes, and put our trust in the movement of the Holy Spirit and the relational connections built through our discernment and work together,” said the Rev. Donna Pritchard, chair of the Leadership Team, in a report released after the meeting. 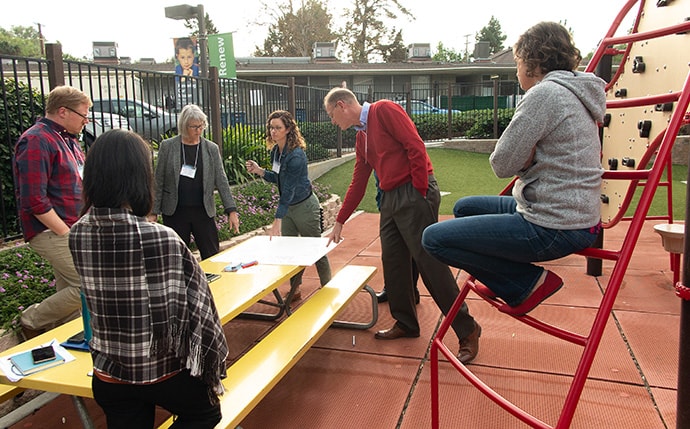 More than 200 United Methodists worked in groups to formulate ideas for a “fresh Methodism” which affirms LGBTQ people and their role in the church. Photo by Kathy L. Gilbert, UM News.
The team called the summit “a movement moment.” Pritchard said the future of the church will come from the vision of young people.

Ryland Christian Fernandez, a young leader from the California-Nevada Conference, said the summit gave him hope amid the “chaos in The United Methodist Church” that had him wondering where he would end up.

“Let this be a call to action. The young people are in your communities and it is time to go to them, it is time to start walking with them. Go to them and ask them what can we do for you and what can you offer us?” he said.

The bishops also brought the Safe Harbor Declaration, first presented to the Council of Bishops on Nov. 6, to the gathering. That declaration received thunderous applause and shouts of affirmation.

Bishop Karen P. Oliveto of the Mountain Sky Conference said that she would reject even so-called “friendly” complaints against clergy that are strictly based on sexual orientation or the fact that the clergy had performed same-gender marriage ceremonies.

The process “creates harm,” she said, “and I am unwilling to do that with people who have been properly vetted. There is no second-class citizenship in the family of faith. If I receive any such complaints, I will file them away.”

“I am with Sister Karen,” Carcaño said. “I will set aside complaints that are simply based on (the person’s) gender identity and sexual orientation.”

Bishop Elaine Stanovsky of the Greater Northwest Episcopal Area said the bishops didn’t consider what they did a moratorium.

“You can proclaim a moratorium, but it doesn’t stop anyone from making a complaint. A moratorium is someone’s hope, but there’s no teeth in it,” she said.

The Safe Harbor Declaration was a way to share risk, said Bishop Grant Hagiya, who leads the California-Pacific Conference. He reported that growing number of retired bishops have agreed to perform same-gender marriage ceremonies in lieu of active clergy doing so. That removes active clergy from the threat of reprisals, he said.

Retired Bishop Mary Ann Swenson, the only retired bishop present, stepped up to say, “And I’m one of the bishops willing to do so.”

Carcaño noted that for the active bishops, “It is humbling to get your affirmation and your praise.

“But we build on the hard work of bishops and conference leaders who have come before us — a long line of justice leaders,” Carcaño added.

Gilbert is a news writer for United Methodist News Service. Contact her at (615) 742-5470 or [email protected]. Communicators from the Western Jurisdiction contributed to this report. To read more United Methodist news, subscribe to the free Daily or Weekly Digests.

United Methodist centrists and progressives have made common cause in working for the inclusion of LGBTQ people in church life, but a veteran General Conference delegate thinks the coalition could be short-lived.
Disaster Relief