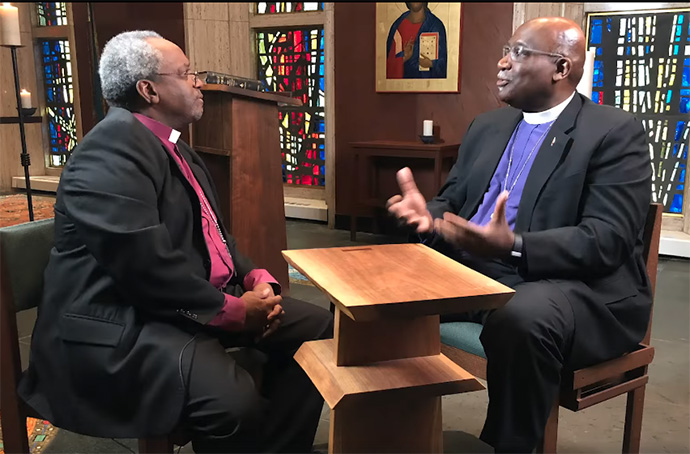 United Methodist Bishop Gregory Palmer (right) and The Episcopal Church’s presiding bishop, Michael Curry, discuss full communion between the two denominations in 2019. The proposed agreement is on hold for now because of disruptions related to COVID-19. File screenshot from video courtesy of the Council of Bishops of The United Methodist Church
Citing the pandemic’s ongoing threat, United Methodists and Episcopalians have put plans for full communion between their two denominations on hold for now.

Leaders of both denominations initially had expected to take up a proposed full-communion agreement when their top decision-making bodies each met this year and next.

“The onset of the COVID-19 pandemic with its sweeping disruptions has regrettably, but understandably, necessitated a rethinking of this timeline,” the Episcopal Church-United Methodist Dialogue Committee said in a Sept. 17 statement.

The disease’s menace already has resulted in the postponement of The United Methodist Church’s General Conference from May this year to Aug. 29-Sept. 7, 2021, in Minneapolis. Now, The Episcopal Church is rethinking the format and timing of its General Convention currently scheduled for July 2021.

With all these changes in mind, the dialogue committee now recommends that both denominations wait to take up full communion until the next General Convention/General Conference after 2021. The committee includes five leaders from each denomination as well as a United Methodist and two Episcopal staff members.

At their May meeting last year, United Methodist bishops had no debate about moving toward closer ties with The Episcopal Church even as they did question the future of United Methodist unity. By unanimous voice vote, the Council of Bishops approved submitting the full-communion agreement to General Conference.

The full-communion proposal, “A Gift to the World: Co-Laborers for the Healing of Brokenness,” has already been submitted as General Conference legislation. It is on Pages 834-841 in the Advance Daily Christian Advocate.

In a video recorded in 2019, United Methodist Bishop Gregory V. Palmer (co-chair of the dialogue committee and leader of the West Ohio Conference) chats with the Episcopal Church’s presiding bishop, Michael Curry, about the relationship between the two denominations.

The two denominations also have an Interim Eucharistic Sharing Agreement that encourages joint celebrations of the Lord’s Supper.

Read Council of Bishops press release on the pause in full communion plans.
“Our ongoing work toward unity at Christ’s table continues,” the committee said. “We do not recommend a delay in action on full communion lightly. This work is an outward and visible sign of the grace that seeks to end all divisions in the human family.”

The recommended delay comes as The United Methodist Church faces its own questions about its future. The coming General Conference faces multiple proposals to resolve the denomination’s longtime debate around LGBTQ inclusion by splitting the denomination along theological lines.

“United Methodists on the dialogue committee acknowledge that we need to have more clarity about the future shape of The United Methodist Church before we ask the Episcopalians to make a decision about this full communion relationship,” said Bishop Gregory V. Palmer and the Rev. Kyle Tau, Council of Bishops ecumenical staff officer, by email.

Palmer, who leads the West Ohio Conference, is co-chair of the dialogue committee.

“Our mutual commitment to this dialogue remains unwavering and we look forward in hope to passing this full-communion proposal at the next available opportunity,” Palmer and Tau said.

In the meantime, they and other dialogue committee members urge their churches’ continued collaboration in ministry, especially in efforts toward racial justice. The group’s proposed agreement bears the title “A Gift to the World: Co-Laborers for the Healing of Brokenness,” and both churches agree they share a common call to heal.

“As we move into the future it is crucial that we find as many areas as possible to join together in shared mission and ministry,” Palmer and Tau said. “We believe the twin pandemics of COVID-19 and racial injustice are so pressing at this time that they call for special intentionality among ecumenical partners to ensure we are speaking and acting with common purpose.”

Full communion is not a merger where denominations become one, such as what happened when The United Methodist Church formed in 1968.

Instead, full communion means each church acknowledges the other as a partner in the Christian faith, recognizes the validity of each other’s baptism and Eucharist, and commits to work together in ministry. Such an agreement also means Episcopalians and United Methodists can share clergy.

The United Methodist-Episcopal dialogue, which dates to 2002, aims at drawing together two churches with historic ties to John Wesley’s Church of England.

A full-communion agreement between the two also would complete a sort of ecumenical square. Like United Methodists, Episcopalians already have full communion with the Lutherans and Moravians. The only line missing in this church quadrangle is between the two denominations with arguably the most shared heritage.

The two churches owe their separation less to theological differences than to the disruption of the American Revolution.

John Wesley remained a Church of England priest until the end of his days. But in the wake of the war, he took the unorthodox step of appointing clergy leaders in the new nation just as many Church of England priests were heading to Britain. Wesley’s efforts led to the 1784 birth of a new U.S. denomination that eventually would become the multinational United Methodist Church.

The Episcopal Church, which would retain its close ties to the Church of England, officially got started in the U.S. five years later.

Both denominations also have struggled with the sin of racism.

The churches share common forebears in Richard Allen and Absalom Jones, who both left St. George’s Methodist Episcopal Church in Philadelphia because of racial discrimination. The two African American church leaders were also frontline heroes who still faced bigotry after providing care throughout a raging yellow-fever epidemic in 1793.

Some 200 years later, both The United Methodist Church and The Episcopal Church have each faced their own disputes around the role of LGBTQ Christians in church life.

Among the proposals heading to the next General Conference is the negotiated Protocol of Reconciliation & Grace Through Separation that would allow traditionalist churches and conferences to leave with their properties and form a separate denomination, using $25 million in United Methodist funds. Palmer was among the protocol’s negotiators, who included United Methodists with very different views on LGBTQ inclusion.

The Wesleyan Covenant Association has continued plans throughout the summer to form that new traditionalist denomination.

The Episcopal Church already has made a similar journey. The denomination ordains openly gay clergy and allows its priests to perform same-gender weddings. However, former Episcopalians who disagreed with these moves, and in many cases the ordination of women, separated to form the Anglican Church in North America.

United Methodists and Episcopalians have continued in dialogue even amid their own internal divisions.

Now, the committee urges that work for unity be done in the wider context of addressing needs for health, racial justice and the remaking of human community.

“As our churches grapple with all the disruptions this time entails, it is our prayer that we will all continue to seek the unity to which Christ calls us, so that the world may believe,” Palmer and Tau told United Methodist News.

“The challenges we currently face demand that the Body of Christ demonstrate its public unity in tangible ways that contribute to healing and justice in our broken world.”

Mt. Bethel Church has agreed to pay $13.1 million to the North Georgia Conference to leave The United Methodist Church with property.
General Church

Much is still possible for our church

A group of clergy mentors, leadership professionals and spiritual guides invites you to join in contemplating the rich possibilities that remain for The United Methodist Church.
General Church